Clare Waight Keller works for a big old house; she likes showing her collections at them too. Her last winter couture collection was held at the Archives Nationales in Paris, the façade as impressive backdrop. This time, it was the Villa Palmieri, a patrician mansion in the countryside outside Florence. Actually, she likes showing in the gardens of those mansions. “There is a French bit and an English bit as well,” Waight Keller said of the villa’s expansive gardens before the show “They’ve really got the feeling of the whole of Europe in here.” Which, given this Englishwoman’s role at the quintessentially French Givenchy, felt apt. Let’s not mention Brexit.

Maybe that combination of culture through horticulture inspired Waight Keller: she called this collection “Nouveau Glitch”, after the fin-de-siècle art movement and the computer malfunction. “Two things clashing, and something strange coming out of it,” was Waight Keller’s response. That led to a collection that combined menswear of the most formal, even florid variety, and sportswear — three-button formal suits, with nylon pac-a-macs billowing over them. That also felt like an interplay between Givenchy’s historical and contemporary incarnations.

Givenchy did a roaring trade in techy, sportswear-influenced pieces under former creative director Riccardo Tisci (Givenchy’s menswear business is roughly equal to its womenswear). And the brand’s aristocratic founder, Comte Hubert de Givenchy, was always impeccably tailored in his personal wardrobe. His maternal grandfather was Jules Badin, owner and director of the Gobelins and Beauvais tapestry factories at the turn of the century. Which meant Waight Keller used rich tapestry fabrics for this show, sometimes four different designs in a single coat. Those fitted in in Florence — “So many of the places you go have wall hangings, and that feeling of the old world,” Waight Keller said.

From the old world to the new — not America, but Asia, and specifically Asian streetstyle. Givenchy collaborated with Onitsuka Tiger, a Japanese athletic footwear brand, the first time it has worked with an outside sneaker manufacturer on a global scale, and besides there were high-tech fabrics, specifically a wardrobe of nylon treatments (micro-featherweight, hi-shine), that spoke of futurism and, for Waight Keller, the hyper-chic style clans of the Far East.

Waight Keller had, until January, shown her men’s collections alongside her womenswear during the twice yearly Paris fashion weeks. As with many shows like this, the men’s had a tendency to fall back and become an accompaniment or accessory to the women’s looks. “It’s the right time now to stand alone,” she said. In the past, it had also tended towards suiting: “a synergy towards the chicer side,” Waight Keller said. “But now, to expand it, to deep dive into the sportswear, the casual side — it brings a whole vision.”

She also neatly inverted the man/woman thing by dressing several female models in full men’s looks. Last season, Waight Keller wore her menswear trousers to talk the press through her men’s collection, and they looked great. This did too. “It’s fluid, but in a masculine way,” she said, adding to a much heard chorus about cross-gender attire.

It’s also commercially savvy — Givenchy still banks big on sportswear. Their men’s concessions in department stores are filled with bold, branded sweatshirts and hoodies at around the £650 mark, as well as sporty backpacks. A few bear designs originating with Tisci — graphic motifs like sharks or snarling rottweilers that continue to shift.

Waight Keller must want to make a similar lasting mark on the house’s menswear — it hasn’t happened just yet. This wasn’t technically her debut men’s show: in January, she presented small standalone men’s debut last season shown in the house’s couture salons. That was when she was wearing those trousers, and the menswear was focused on colourful tailoring with a Seventies bent, stylish but limited by its marked specificity, and certainly not obviously appealing to the sportswear-baited masses. By contrast, this seemed like something of a box-ticking exercise of what a Givenchy man may wish to buy — proposals for a wardrobe, showing the breadth of what Waight Keller can offer for him. That was savvy — as was the fact those bound-to-be-cultish Onitsuka Tiger Givenchy trainers are already on sale.

Explore the series
READ MORE
Getting wiggy with it: what’s with the hideous hair at SS20 men’s 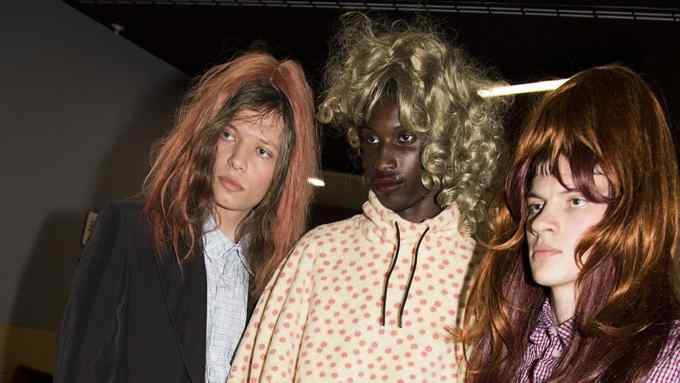