Cycle couriers: ‘The best of all the world’s worst jobs’

Workers have created a mythology around the industry, laden with nostalgia for pre-internet days

“Couriers are always talking about golden ages. It’s a very nostalgic industry,” says Emily Chappell, a former courier who has written What Goes Around about her experiences. Most of her former peers are misty-eyed about the 1990s, an era when there was supposedly “too much work to handle”.

There is a whiff of romanticism about the job, highlighted by this book as well as two other recent courier memoirs (Jon Day’s Cyclogeography and Julian Sayarer’s Messengers). They describe a countercultural tribe. This mythology and camaraderie can trap people, says Ms Chappell. “People love the job, identify with it. They stay in it despite the problems.”

Couriers describe the job as their entry to a hidden city: subterranean post-rooms, loading bays and backdoors. Mr Day saw the role as partly that of flâneur, a laid-back observer of city life. When he was admitted to the scruffy basements beyond the grand marble frontages, it revealed the “theatricality of commercial concerns”. Ms Chappell describes the pleasure derived from seeing buildings’ construction and the changing seasonal light falling on familiar landscapes.

There is a pleasure too from being unnoticed. “Couriers are invisible to many,” Mr Day says, like GK Chesterton’s murderous postman, who goes about his crimes unperturbed because he fades into the background. He fondly recalls being waved in to Downing Street (the home of the British prime minister and chancellor of the exchequer), his only verification being a radio on his shoulder.

There is also the physicality of the work. “It makes you feel strong and powerful and beautiful,” says Ms Chappell. Mr Day says that he loved being physically exhausted after riding 60–100 miles a day, a feeling he no longer has as an English lecturer at King’s College London. Never before or since has he had such exquisite sleep. Others describe the sensation of feeling as if their body is perfectly in tune with the bicycle and road.

The cyclists-turned-authors worry about painting a kind of urban pastoral. “It is very nice but it’s not the whole picture,” says Mr Sayarer. He sees it now as the “best of all the worst jobs in the world”.

The flipside of being invisible, after all, is being ignored, particularly by erratic drivers of lorries and cars, although frenetic zigzagging across roads by couriers has its own dangers.

Sarah O'Connor
What the small print tells us about Uber, Task Rabbit and Upwork 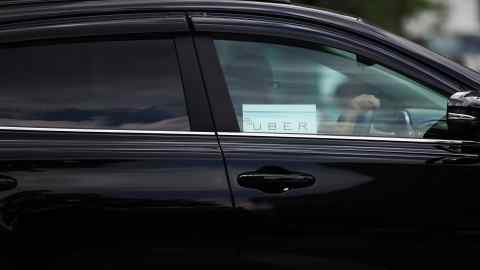 One courier describes the exhaustion as sporadically dangerous. There have been times, she says, when she has been so tired she could not focus on the road and heavy traffic. The work takes its toll on bodies too. Mr Day describes weathered, worn couriers whose “bikes were functioning as prostheses, as mineral skeletons, ensuring that their legs kept spinning and their arms continued their twitching dance over the tarmac”.

There have been dodgy requests, such as doing drug drops for clients. “No rookies. No mules. No muppets,” runs a slogan for Control, a London collective owned and operated by riders.

There are some radio controllers who bully their cycle couriers. One said that if she hears their voice come over the radio “it gives me goosebumps”. The controller is the powerbroker and cyclists try to prove themselves by taking on tricky jobs.

Then there is the pay. In a good week it can fetch more than £400, but it can be less than the minimum wage. Campaigns by the Independent Workers Union of Great Britain have tried to persuade employers to pay the living wage. Jason Moyer-Lee, the union’s president, says that this can be tricky as couriers are paid by delivery rather than hour. The worst aspect of the work is the unpaid waiting.

There is also the issue of couriers being independent contractors despite typically working for one company. Some like the freedom, which enables them to slip in and out of the work, fitting it around other jobs. Others do not. The transient workforce means that it is a fairly fluid community open to newcomers. Eastern Europeans and Brazilians are prominent.

The IWGB is contemplating mounting a legal challenge to the independent contractor label. Mr Moyer-Lee says this would qualify workers for sick and holiday pay. “Sick pay is a huge issue due to the dangerous nature of the job.”

The issue of classification is becoming a particularly thorny one for workers in the so-called “gig economy”. This year, courts will decide whether Uber drivers should be treated as full employees rather than contractors.

While there is the London Courier Emergency Fund, which provides support and financial help to those bicycle couriers who have suffered an injury whilst at work, Mr Moyer-Lee thinks that employers are benefiting at the expense of the cycle couriers. He also cites the increased use of monitoring, whereby controllers can track a courier’s location using GPS.

“Companies can’t have it both ways. On the one hand there is extreme monitoring but no employment rights. It’s hypocritical,” he says.

Mr Sayarer believes that GPS technology has increased the pressure. “It isn’t a healthy development in the industry.”

I ask one courier if she would be better off leaving: she says she has too much invested in the job to quit. “I’m good at it. If it’s not you being exploited, someone else will be. Things don’t improve by quitting. We should make things better.”

There is also sexism, she says, in an industry that is dominated by men. “It’s a boy’s club — they get pissed off if you don’t smile at them. I get hit on by couriers, staff in loading bays, security rooms and postrooms and drivers.” The way she copes is to block it out.

Ms Chappell, however, finds couriers inclusive. The bigger problem is the drivers. In the end they were what put a brake on her couriering. “Road rage and aggression made me stop wanting to go to work.”

Get alerts on Support services when a new story is published