It’s a colourful new chapter at the fabled US jewel house that was bought by the LVMH group for $15.8bn earlier this year. In the first collection to launch since the completion of the purchase, and a near-total overhaul in leadership, Colors of Nature has drawn on the original jewels and drawings of former Tiffany & Co designer Jean Schlumberger, as well as showcasing Technicolor pieces that reinforce the house’s historic reputation for unearthing coloured stones.

The discovery of new varieties of gemstones has been a game-changing phenomenon in the jewellery world, and many of these momentous discoveries have been thanks to Tiffany. In the early 20th century, the house’s legendary chief gemologist GF Kunz, who had explored and championed Native American gem materials, identified kunzite (named after him) and morganite, named after the financier and gem-collector JP Morgan. In the late 1960s and ’70s, it was Tiffany that introduced the new African gems – heather-blue tanzanite and grass-green tsavorite – to the world.

Tiffany’s new Blue Book high-jewellery collection reminds us of its connections to these gemstones and renews what must be the earliest of inspirations: nature, a theme that, like the gems, has long threaded a narrative through the house designs. The collection combines newer pieces and those recreated from original jewels and drawings by Schlumberger, for whom colour and nature were driving forces.

Victoria Wirth Reynolds, Tiffany’s chief gemologist and vice president of global merchandising for high jewellery, says that while nature has always been a major source of inspiration, they set out to do this collection differently: “To reimagine this perennial theme by using nature as a backdrop, and elevating it with the extraordinary gemstones and craftsmanship that underpin Tiffany’s authority.”

Reynolds was charged with finding the rarest gemstones. “It’s often more about a feeling you get, which can be very personal,” she says. “Each gemstone needs to have something magical, an inner beauty that draws us in.” Those ravishing rarities include a Paraíba-style, electric-blue tourmaline ring and a black opal showing dramatic brushstrokes of red, orange, yellow, green and blue. There’s also a captivating natural orange melo pearl of 95 carats (which can take decades to grow inside its mollusc) suspended on a diamond chain necklace, and a suite of 15 esteemed Russian demantoid (green) garnets with distinctive horse-tail inclusions.

Each gem needs to have something magical, an inner beauty that draws us in”

The lingerie-pink morganites seen in a necklace-and-earring suite are perfectly complemented in depth and tone with light-green beryls; the uniform, square cut of the stones is deceptively simple, especially considering the morganites and beryls took a year to collect and cut. Reynolds explains that finding the perfect colour palette for the collection was “an exercise in marrying the colours we experience all around us with the most spectacular stones that we were able to acquire”.

In the second part of the collection, Reynolds explains, “We wanted to showcase Schlumberger’s visionary designs – some never seen before, re-envisioned from original sketches. Schlumberger is so important to our high-jewellery story, we wanted to elevate our heritage and bring it to life.” It was a way, too, to re-establish the aesthetic and authority of the annual Tiffany Blue Book collection, which is rooted in exceptional gemstones, craftsmanship and imaginative design.

Schlumberger masterpieces were selected to fit within the Colors of Nature framework, and to highlight the artist’s individualistic take. Schlumberger created fashion jewellery for Schiaparelli in Paris in the ’30s before turning to precious jewellery. After moving to New York, first in 1939 and then after the war, he gathered an elite clientele, including his close friend Diana Vreeland, and developed a distinctive rococo style. This is captured perfectly in a show-stopping thistle necklace, set entirely with diamonds, the wild prickly thicket wound through with gold wire. The Vrille necklace is a theatrical fringe of luscious rubellites from which grow full-blown blossoms, while the Surreal Shell Necklace is an uncharacteristically streamlined interpretation of shells – a favourite Schlumberger theme – each one platinum and diamond-set and centred on a superb sapphire. In a re-edition of one of his most celebrated designs, the Twin-Fish clip of 1965, two diamond-paved fish are suspended from a baguette-diamond ribbon bow. 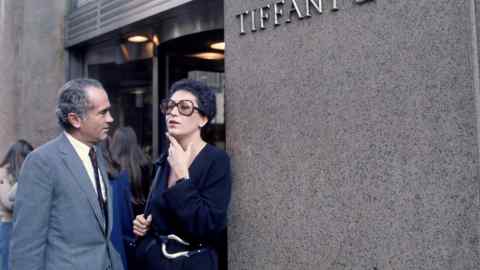 This celebration and rejuvenation of heritage is part of Tiffany’s new path. Recently, the house dipped into its archives to find a ’70s design that evoked the spirit of New York, which it added to its Hardwear collection; last year’s new editions marked the 50th anniversary of Elsa Peretti’s Bone Cuff. The house’s ability to draw on such storied designs surely appealed to LVMH, which acquired Tiffany & Co after a year of wrangling and a much-publicised on-off deal. As Tiffany launches into a new era, and while awaiting crucial decisions, including around the appointment of an artistic or design director, the two parts of this collection make a fitting expression of how the company might go forward. A house with such an illustrious heritage, global reach and one of the strongest identities in the market – Tiffany & Co could become the new jewel in LVMH’s crown.