Companies vie to develop ways to dispose of space junk

A new space race is ready for lift-off: garbage disposal.

The danger to satellites and space stations from millions of pieces of orbital wreckage after more than 60 years of space exploration has become a commercial opportunity and one of the best-funded companies in the sector is based in Asia.

“Cleaning up space is critical,” said Nobu Okada, the founder and chief executive of Japan-based company Astroscale. “People know about global warming. People know about ocean clean-up. But they don’t know anything about the space debris issue.”

Astroscale said it has raised $132m following its most recent investment round this week, which coincides with the opening of its US office. Investors include developer Mitsubishi Estate, venture capitalist SBI Investment and airline group ANA Holdings. Mr Okada said no other company with a mission solely to clean up space debris has raised as much.

Astroscale, as well as the RemoveDEBRIS project in the UK and US group Rocket Lab, are pitching the destruction of discarded rocket parts and defunct satellites as a business proposal.

Estimates for the amount of space junk vary but the European Space Agency believes there are 900,000 pieces of debris larger than 1cm and most are located in low earth orbit — no further than 2,000km from the ground.

That number is set to increase as one of the hottest sectors of the space industry — the race by private companies such as SpaceX and Amazon to develop lower cost rockets to deploy so-called nanosatellites into orbit — heats up.

“Debris removal is a small but growing market,” said Laura Forczyk, owner of Atlanta-based space consulting firm Astralytical. “Until recently, there wasn’t a financial incentive for companies to take on the task of removing orbital debris. Now we’re seeing this become a viable business case.”

At stake is the survival of what will be a $2.7tn market by 2045, according to Bank of America Merrill Lynch. The value of the space market — ranging from the manufacture and use of infrastructure to space-enabled applications such as satellite phones and weather services — reached $339bn in 2017, according to the US bank.

Objects in space can travel at 40,000km per hour and at that velocity even a 1mm-sized object can have a devastating effect, said Holger Krag, head of the space debris office for the ESA.

“It is the same energy as an exploding hand grenade,” said Dr Krag. “Even today we are losing satellites due to debris and it is only a matter of time before more start colliding. If we continue the way we do, 10 years from now some regions in space will be too risky to visit.”

There is growing awareness among governments for the potential of a “Kessler syndrome” chain reaction of collisions, creating even more dangerous particles. Anti-satellite tests such as one by India last month, condemned by US space agency Nasa, have also contributed to the risks.

In accordance with the 1967 Outer Space Treaty, nations are responsible for their nationals’ actions in space. Any debris created by satellites by technology failure or collision are the responsibility of the government where the satellite originated. However, this does not mean governments are responsible for funding clean-up efforts, said Ms Forczyk.

Astroscale, which is still trying to convince governments it is their responsibility to remove their litter, calls its technology “dancing with the devil”.

“Our method involves sending up a satellite and using technology to synchronise the motion of a piece of debris . . . then capture and hold it, and bring it down to the atmosphere so they both burn,” Mr Okada said.

Astroscale plans to launch its first mission in early 2020. It would not reveal the cost of building its satellites but making the technology cheap and simple enough is still a stumbling block for many of these companies.

“There are a number of excellent ideas and some small-scale tests for clean-up of the real problem to date — but there are very few if any credible long-term commercial company prospects in the space,” said Matt Ocko, a partner at Data Collective, a San Francisco venture capital firm invested in Rocket Lab.

The latest technology from Rocket Lab, which primarily builds and launches small rockets, enables both the testing and delivery of orbital debris cleanup at scale, Mr Ocko said. 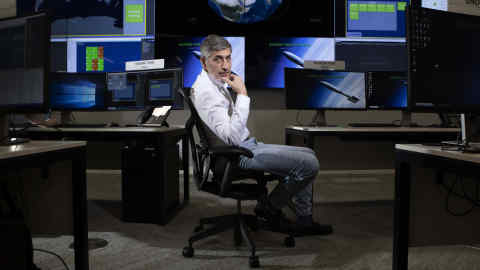 The most successful mission to date is a series of trials by the RemoveDEBRIS project in the UK, which involved deploying a net to capture debris.

“Ours is low-cost technology and to date the most successful mission,” said Guglielmo Aglietti, director of the Surrey Space Centre at the University of Surrey, which developed the project.

“But there are horses for courses so other methods may be a better option for different types and sizes of debris,” Mr Aglietti added. “Astroscale is slightly different but they are definitely one of the main players in this space.”

Others agree on the urgent need for space debris removal, but are circumspect about the business model.

“There needs to be pressure from the space community and governments to monitor these companies,” Mr Ocko said. “Governments in particular are going to have to step in because it is in their interest not to have space denied to them.”