For the first time in almost a decade running Europe’s biggest oil and gas company, Shell chief executive Ben van Beurden reckons he is being listened to.

The commodity shock sparked by the war in Ukraine has sent European officials scrambling to better understand the global energy system and secure new sources of supply. Some of them have ended up at Shell’s door.

“On energy security matters, energy balances, investment levels, I’ve never had as good a set of discussions with governments as we are having today,” van Beurden told the Financial Times.

In the UK, Shell is being asked to produce more gas in the North Sea. In Germany, it is in talks to help operate and supply one of the country’s most important refineries should it be cut off from Russian oil.

The renewed engagement with previously shunned supermajors represents a major change from last year when Shell was ordered by a court in the Netherlands to slash its emissions, and oil and gas companies were excluded from the COP26 climate meeting in Glasgow.

Shell has appealed against the court ruling, provoking fierce criticism from environmental groups which argue that it should have acknowledged the impact of fossil fuels much sooner and is doing far too little to change course. At its annual meeting in London in May, protesters disrupted proceedings for three hours.

In an interview at Shell’s headquarters in London, van Beurden argued that governments had too often set emissions goals without a plan of how to achieve them and pushed for cuts in oil and gas production without taking measures to curb consumer demand.

“As long as society believes that by starving [fossil fuel] supply you will somehow force demand to come down as well, that is not a sustainable way of tackling the energy transition,” the 64-year-old said. “Supply needs to adjust but it needs to adjust to less demand.”

In response, Shell last year said its oil production had peaked and that it would stop oil and gas exploration in new markets after 2025. It has committed to cut emissions from its own operations by 50 per cent by 2030 and to net zero by 2050, while also reducing, although not as quickly, the carbon emitted when the fuel it sells is burnt.

Will European demand for alternatives to Russian fossil fuels prompt a reversal on those commitments? “Absolutely not,” van Beurden said. Instead, he thinks governments’ renewed focus on energy policy and energy security will help Shell move “faster”.

Rather than being seen as an oil and gas major, van Beurden now prefers “energy transition company” but, like its peers, Shell has struggled to convince investors that it can complete the transformation.

The company’s share price has climbed 25 per cent this year but is still down about 6 per cent since van Beurden took the top job. BP is down 21 per cent over the same period.

While BP has committed to cut oil production by 40 per cent by 2030 and develop 50 gigawatts of renewable power, Shell’s so-called Powering Progress strategy is less prescriptive, focused instead on how it will help customers to decarbonise. Rather than building a collection of wind farms or solar plants and hoping to sell the power produced, van Beurden said Shell’s approach would be to start with each customer and provide the low-carbon solutions they needed.

For now, clean energy represents a sliver of Shell’s business. Its integrated gas and upstream oil divisions generated more than 80 per cent of the record $9.1bn in adjusted earnings Shell made in the first three months of the year. Renewables and energy solutions were responsible for $344mn, or less than 4 per cent.

Shell says it has recruited close to 1,000 people into that part of the business. But it has also had some high-profile departures and, unlike BP, still has no one with renewable energy experience on the executive committee.

Elisabeth Brinton, head of the renewables and energy solutions division, left Shell in February after three years at the company. Senior green energy appointments from investment bank Macquarie and solar group Lightsource BP have also arrived and left in the past two years.

One former executive said reshaping Shell’s 82,000-strong workforce to deliver on the energy transition would be its biggest challenge. “The company can transition but the people can’t,” the executive said.

Van Beurden said he had no concerns about staff turnover in the renewables division. Appointing a renewable energy specialist to the executive committee would have felt like a “symbolic change” at a time when that business was generating only a small fraction of group profits, he added.

Having spent his entire 39-year career at Shell, van Beurden’s objective since 2014 has been to improve performance, he said. “What I always felt is this company . . . always fell a little bit short of its potential.”

Four months into the job he proposed that Shell, then the world’s largest trader of liquefied natural gas, acquire the second-largest, BG Group. The $52bn acquisition — the biggest in Shell’s history — has left Shell with about 15 per cent of the global LNG market as demand for the fuel is booming. It also provided van Beurden with an excuse to rationalise other parts of the business. “It’s very hard to shrink to grow, but to grow and then improve on it is a whole lot easier,” he said.

One way to supercharge Shell’s energy transition strategy today would be to do the same thing again, but this time — flush with cash from soaring oil and gas prices — acquire a big renewables business.

But a deal the size and impact of the BG takeover would be difficult, he said. “I have purposely held back from doing large things in that space to make sure that we first of all know how their business works.”

Bankers like to suggest that Shell could buy Danish power company Orsted or Germany’s renewables-focused RWE. Although van Beurden said that neither deal was likely, he added that Orsted in particular would not fit with Shell’s customer-focused plans. “I’d be more inclined to think of an RWE with a customer base than an Orsted with a collection of wind farms.”

Shell’s preference has been to acquire medium-sized power companies at around the billion-dollar mark, he said. In April, it bought the Indian renewable power group Sprng Energy from Actis for $1.55bn.

In future, Shell will sell more of its oil assets and use the proceeds to fund other energy transition deals. Oil prices have been above a seven-year high all year, but judging when to divest to get the best value is increasingly difficult, he said. “It’s a bit like trying to catch a falling knife at this point in time.”

In the absence of a major acquisition, billions of dollars will continue to be returned to shareholders. Shell has completed $8.5bn of share buybacks this year already. “If you can extrapolate a little bit what can come, we can buy back a very significant part of the company,” he said. 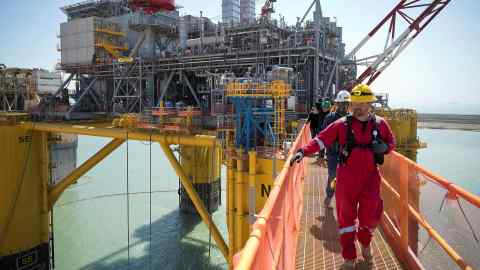 Although Shell insists that there are no plans for van Beurden to step down, few Big Oil chief executives have served much longer than 10 years and, according to people familiar with the details, the board began talks with possible internal candidates last summer.

When he eventually leaves he wants to have added value for shareholders but also to have done “the right thing” as a citizen, he said, insisting that he was still comfortable with Shell’s much-criticised decision to fight the Dutch court ruling. “For me personally it has been absolutely a leitmotif: the things that I do need to stand up to scrutiny well into the future.”