If you think the same, join us
Argentina

Argentina’s newly restructured dollar bonds have slumped in value less than a month after a deal was finalised to postpone debt payments, as fears grow about the country’s economic health.

On August 31, Argentina clinched near-unanimous approval from its bondholders to restructure $65bn of foreign debt after months of sparring. The country’s sovereign bonds began trading this month, and have already fallen towards distressed levels.

One note, set to mature in 2030, is now trading at roughly 40 cents on the dollar, having debuted earlier this month at just over 50 cents. Another approximately $20bn in bonds maturing in 2035 slipped as low as 35 cents on the dollar last week. It now hovers around 37 cents. According to calculations by Morgan Stanley, the initial performance is the worst for any newly restructured emerging-market bonds in the past 20 years.

“We are a little bit surprised by the move,” said Carl Ross, a partner at fund manager GMO, which was involved in the negotiations. “A normal course of events is that after a country restructures its debt it is usually on a better path.”

Another emerging markets debt investor, who asked not to be named, called the sell-off “unprecedented”, adding: “I’ve never actually seen anything like this where the country does a restructuring and so soon after, it is back in hot water despite the fact that it doesn’t have any debt payments for a few years.”

Under new terms, Argentina does not face sizeable repayments on the debt for the next four years. Interest rate payments were also lowered from an average of 7 per cent to about 3 per cent. Taken together, the deal amounted to debt relief of $38bn over the next decade. 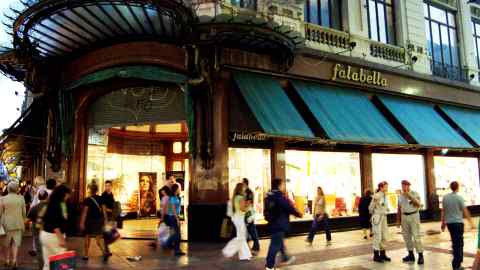 Despite this relief, investors have become increasingly rattled by the government’s approach to managing the economy, which has collapsed as the coronavirus outbreak has raged on. Although officials expect the economy to contract more than 12 per cent this year, they are also forecasting a 5.5 per cent rebound next year.

“There is still lots of hard work to be done in terms of implementing an economic framework that inspires confidence not just in bondholders but in the local population,” said Graham Stock, a senior strategist at BlueBay Asset Management, which was part of the biggest creditor group alongside BlackRock.

Economists have raised concerns about the growing gap between the country’s official and parallel exchange rates, which opened up following the imposition of capital controls last year.

Earlier this month, Argentina tightened capital controls to protect its dwindling stock of net foreign exchange reserves, which plummeted to roughly $5bn, according to estimates from Portfolio Personal Inversiones, an investment firm in Buenos Aires. The move was described as “draconian” by Federico Kaune, head of emerging markets fixed income at UBS Asset Management. Some now fear another devaluation of the peso in the medium term.

Shamaila Khan, head of EM debt strategies at asset manager AllianceBernstein, said she hoped upcoming talks with the IMF would compel the government to be more “transparent” about its plans to stabilise the economy and promote growth. The fund lent Argentina $44bn as part of a record $57bn bailout package extended in 2018 and its officials are planning a visit to the country early next month.

Until a new IMF deal is reached, investors expect Argentina’s dollar bonds to remain under pressure.

“No one wants to stand in front of a moving train wreck,” said Edwin Gutierrez, head of EM sovereign debt at Aberdeen Asset Management.