In mid-June, a photo appeared on Instagram of New York mayoral hopeful Maya Wiley with congresswoman Alexandria Ocasio-Cortez, maskless, hugging members of rock band The Strokes in front of hundreds of screaming fans. They were in Irving Plaza for New York’s first full-capacity indoor concert in more than a year. In each post that followed that night, New Yorkers were adamant: “New York is back!”

The city, of course, is not fully “back” the way we remember it. Hotels are running at only 50 per cent occupancy, according to analyst STR. Broadway is still almost entirely closed, and likely to be until September, while white-collar office workers are commuting to Midtown sporadically at most.

But the culture? The culture is bursting at the seams. On June 15, governor Andrew Cuomo lifted virtually all restrictions on the state. As the country reopens, New Yorkers are finally freer to leave, taking the trips we dreamt of in quarantine: the Grand Canyon, Miami, Puerto Rico. But, strangely, many young New Yorkers are instead choosing to stay and bask in the reawakening of their city. This summer, New York is a playground for New Yorkers.

“New York is never going to be like this again,” one friend tells me over drinks, pulling out her phone so we can share a Google calendar. The goal is to protect as much time in the city this summer as possible. “Every weekend we leave,” she says, slightly stressed, “is a weekend we’re missing the magic!”

And magic it is: one Sunday afternoon I am squeezed between hundreds of strangers at Baila! Nueva York, dancing to Justin Strauss, a 40-year fixture on the New York DJ scene. On a weekday afternoon I walk through the Whitney Museum, almost entirely free of tourists, and stand in empty rooms with Dawoud Bey’s photographs of black America and Julie Mehretu’s immense, all-consuming abstract maps. A guard smiles, sitting on a stool. “It’s beautiful, isn’t it?” he says. “The museum has been reopening like everything else, but it sure is still quiet.”

What you’re seeing now is New Yorkers ready to take back their city, to enjoy it”

On Little Island, a whimsical new park floating atop the Hudson River at 14th Street, I’m one of the more than 400,000 people to visit since it opened in May. The park cost $260m to build and costs $0 to visit. Families loop along the paths, speaking languages I can’t place. We are all mid-photo shoot, snapping not just the view but ourselves and each other, New York now a sexy Instagram backdrop for our re-emergence.

In the Meatpacking District, an outdoor, immersive off-Broadway production has emerged called Seven Deadly Sins: seven 10-minute plays, each based on a sin — pride, greed, envy and so on — each performed in different window displays of seven empty storefronts.

We listen with headphones, the beeps and sirens of the city leaking through. We laugh, whoop and wipe tears. The quality of the plays varies, but does it matter? It’s live theatre on an imaginative stage, and we are shoulder to shoulder with other New Yorkers, tourists in our own town.

The re-emergence of New York is a word-of-mouth game of cat and mouse. Where do you dance? What’s open until 4am? What’s back? Which streets are closed, and when?

Sit down alone to tie your shoe and, within five minutes, you’ll be deep in conversation

On weekends, Vanderbilt Avenue in Brooklyn is closed to vehicles. Its neighbourhood association raised funds to continue last year’s citywide Open Streets programme, so restaurants can spill out and musicians can perform. On the Lower East Side, bars heave. A neighbourhood once lost to preppy white 20-somethings is now packed with people of all ages and races, pressed up against each other, strangely less gentrified.

And strangers, they talk now. A lot. Sit down alone to tie your shoe and, within five minutes, you’ll be deep in conversation about crypto, or therapy, or the things you bought in quarantine.

One Thursday in Crown Heights, a new live music venue and café called Wild Birds is already packed by 6pm. They opened in March 2020 and sustained themselves through the winter selling plants and wine. Co-owner Luke Bonner collects tips for the first of his three musical acts that night, an Afro-Latin jazz band. When he reaches my table I tell him I’m writing about New York reopening, and his eyes grow wide. “Don’t give us too much exposure,” he says, laughing. “We can barely keep up as it is.”

“In my 20 years of bartending,” says the manager, Monica Sharp, “I’ve never seen anything like it.”

One New Yorker on TikTok asks the question on all of our minds: does this summer in the city feel different for everyone, and why are people behaving like the stars of their own film? “Everyone is giving main character energy,” he whispers to us, the audience in his phone. “And are y’all feeling the eye contact or is it just me? It can’t just be me.”

“This is one of the benefits of there not being a lot of international travel right now,” says Ian Schrager, the celebrated New York hotelier and co-founder of Studio 54. Global cities can accidentally lose sight of their residents in favour of tourists from around the world, he tells me. “But what you’re seeing now is really the New Yorkers, the quintessential New York people, ready to go mad, to take back their city, to enjoy it.”

At 74, he has just reopened his Lower East Side hotel Public, with a new Peruvian restaurant, Popular, and a fresh and relevant theme: luxury for all. He tells me that our grandparents’ notion of luxury means nothing any more, and the concept of scarcity is entirely outdated. The pandemic has only pushed that into clearer view.

“Luxury is being made to feel good, being treated nicely, feeling safe and having the freedom of time,” he says. “And everyone is entitled to it, not just the 1 per cent.” At Public, there’s no man at the front desk with white gloves and a glass of champagne. In fact, there’s no front desk at all.

I ask him about the parallels between this and Studio 54.

“In the nightclub where I got started, you don’t have a discernible product,” he says. “You have the same liquor and music as everybody else. So I learnt that what you do to distinguish yourself is make people feel good. Studio 54 was successful because people felt free and protected. Everybody was there to have fun. I would see a gay guy with tight jeans and no shirt dancing with a woman in a ballgown and a diamond tiara. Any class distinctions, demographics, age, wealth, race? Irrelevant. Everybody felt free. Everybody wanted to have a good time.”

That’s how I feel about New York this summer, I tell him. That fun has been somehow democratised: there’s less value on exclusivity, the hierarchy has fallen away, and we’ve come out of this collective trauma just wanting connection.

He smiles and nods. “You’ve hit the bullseye with that.”

A 40-minute train ride from Public, in Flatbush, central Brooklyn, Garnett Phillip, 44, is sitting in the corner of her bar, The Rogers Garden. Phillip is Trinidadian and Ethiopian, and her bar was inspired by the Caribbean rum bars she has always loved. “Not the high-end ones,” she clarifies. “The real, local rum bars. They have the bright colours, that galvanised metal, it makes you feel good.”

The bar is a pandemic success story — opened in July 2020, it has defied the odds to become one of Brooklyn’s most popular new neighbourhood bars, about 15 seats inside leading out to a large garden built to mingle. Covid laws required bars to serve food, so Phillip built a tiki hut in the garden and lent it to local chefs.

On Thursdays and Saturdays, fans come for the fresh lobster tails, rasta pasta and jerk chicken of Nina Laurient’s D’Mix Kitchen. Before the pandemic, Laurient was a speech therapist, known as a talented cook only by family and friends. When the bar opened, Phillip invited her to the Garden. A year on, Laurient has built a cult following and resigned from her day job. She plans to do pop-ups full-time come October, and have a restaurant and food truck by the spring.

It was the dream in my head. My DJs in here playing music, live music outside, everybody dancing

“I knew this was my passion and in the long run I’d find a way, but never at this pace,” Laurient tells me. “Now I sit in the hut on a Saturday, watching people come in off the street because they know the smell, and I think, wow. Look at what God has brought me. It’s something from my wildest dreams.”

Phillip looks tired and relieved. “That Tuesday [last month] that restrictions were lifted, I looked around my bar and got really emotional,” she says. “It was packed. And it’s been like that every night since. It was the dream in my head. My DJs in here playing music, live music outside, everybody dancing, singing, drinking, mingling.” 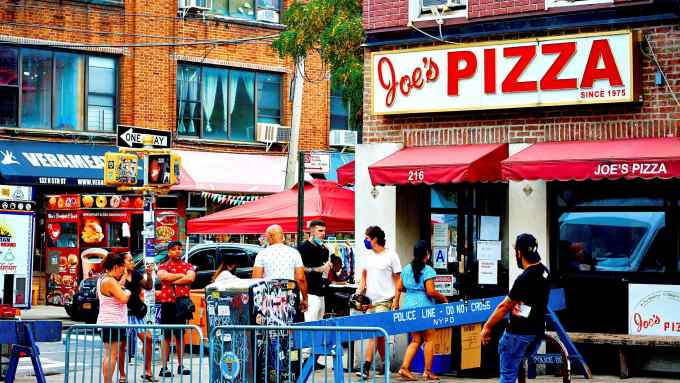