How does Taiwanese collecting compare to that in mainland China — and will the new Taipei Dangdai art fair change things?

Just two decades ago, Taiwan had a bigger share of the global art market than mainland China, which was only just beginning to emerge on the world stage. In 2000, according to the art economics specialist Clare McAndrew, the Hong Kong and Taiwanese markets were roughly the same size.

How things have changed! Today mainland China is the art market’s Asian powerhouse, and Taiwan more like a Sleeping Beauty — but one that the new Taipei Dangdai fair, which opens to the public next week, hopes to reawaken.

And it is not as if the Taiwanese have been absent from the art market. Indeed, art collecting has a long tradition on the island, with a number of important and deep-pocketed collectors who generally prefer to stay under the radar. While mainland China was undergoing the upheavals of the 20th century, the Taiwanese were building their economy and travelling. And they were buying art — mainly domestic and Chinese artists, with an emphasis on their classical Chinese cultural heritage.

“The major collectors — doctors, self-made entrepreneurs — made their fortunes during the latter half of the 20th century, thanks to exceptional economic growth fuelled by rapid industrialisation and accelerated globalisation — and now their children are taking up collecting as well,” says the leading Taiwanese collector Pierre Chen, founder and chairman of electronics components manufacturer Yageo.

“Initially, [Taiwanese collectors] had a common interest in works by modern Taiwan artists,” he says. “Each went on to pursue diverse passions for Chinese calligraphy, brush paintings, imperial porcelain and, more recently, photography [and] contemporary works by both Chinese and western artists.”

Taiwanese collectors are still thought of as a bit conservative, and many still favour Chinese and local artists. However, this is changing rapidly. According to Nick Simunovic of Gagosian Hong Kong, “Taiwan has always been an important collecting region, with serious, informed and motivated collectors. Recently there has been a radical shift from buying contemporary Chinese art to taking an interest in Asian names from the whole region.”

A typical example is Leo Shih, a hardware inventor based in Taichung, who began buying art in the 1990s. He explains his shift of focus from classic Chinese art to contemporary Asian art: “There are few collectible old Chinese paintings left; some Chinese artists actually destroyed their own work during the Cultural Revolution. So collectors have to look elsewhere to continue their passion.”

His own collection includes Chinese and Taiwanese artists such as Sanyu, Lin Fengmian, Xu Beijong, Yan Wenliang, Liu Haisu, Chen Cheng-Po, Liao Chi-Chun, Chang Shuhong and many more. Asked if he plans a private museum, Shih says, “Not yet! But I feel it’s my obligation to show my ‘first generation artist’ collection — these works are rare, and also the missing link in Chinese fine art history.”

Gina Yeh, a spokesperson for the local auction house Ravenel, notes that Taiwanese collectors still prefer works by the likes of Zao Wou-Ki, Chu Teh-Chun, Walasse Ting or Sanyu. But she says the younger generation are interested in Japanese and international names — Kaws, Jeff Koons, Banksy, Yayoi Kusama, Yoshitomo Nara and Takashi Murakami. “We have had good sales of minor works by these artists in the last two years,” she says, noting that brand collaboration by Louis Vuitton and Dior has helped make them better known.

The Taiwanese follow the artists they like and stay ith a few dealers. Chinese collectors are different

Certainly, the arrival of western art galleries and art fairs in Asia has had a huge impact in changing tastes. Being shown during Taipei Dangdai is a special project, “Echo”, by the young Taiwanese artist Wu Chi-Tsung, at Galerie du Monde. Wu was first shown in Hong Kong in 2010, at Art Hong Kong (the fair that subsequently became Art Basel Hong Kong).

So, is there a difference between what Taiwanese and mainland Chinese like to collect?

“Taiwanese buyers follow the careers of the artists they like and tend to stay with very few dealers,” says Chen. “Collectors in China are taking a rather different trajectory. Unlike Taiwan, China suffered irreparable cultural destruction as a result of the Cultural Revolution. The rapid accumulation of wealth, though still in the hands of relatively few, after China stepped up radical market reform in the 1990s, set the stage for art buying as an investment vehicle. So investment and publicity remain strong motivations for collectors in China.”

It should be noted that Chen, who collects international art, including Bacon and Twombly, is also an investor, in that he has been active as a third-party guarantor at major Western auctions.

In Taiwan, there are few private museums: one is the Chimei in the south, with an eclectic collection from European Old Masters to musical instruments. The Fubon Art Foundation is a “wall-less” initiative which hosts lectures, exhibitions and performances around Taiwan to make art more accessible. And Fubon’s CEO, the collector Maggie Tsai, has ambitious plans for a new museum. Perhaps Dangdai will stimulate more of Taiwan’s shy collectors to show their holdings . . . 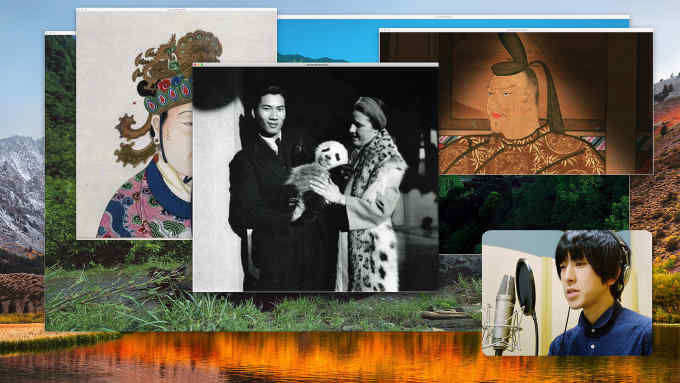