Companies are failing to ensure that their drugs and vaccines reach the world’s poorest people or to fully control manufacturing waste, which increases the risk of bacteria resistant to antibiotics, a watchdog has warned.

Access to Medicine Foundation, a pharmaceutical industry watchdog, said in its annual survey that insufficient efforts to ensure drugs are approved by local regulators or available affordably contributed to the deaths of 5.7m people each year, mainly in lower income countries where resistance is growing.

Antimicrobial resistance (AMR) has been described by experts as one of the greatest threats to public health in the 21st century. According to a 2018 study published in the journal Frontiers of Immunology, AMR could kill up to 10m a year worldwide by 2050.

The AMF survey shows that producers of only 54 of the 166 antibacterial and antifungal medicines and vaccines tracked have a strategy for ensuring that they are provided to the 102 low and middle income countries with the greatest need.

“Those facing the highest risk of infection and the highest rates of drug resistance have the hardest time getting the antibiotics they need,” Jayasree Iyer, chief executive of the Access to Medicine Foundation, said in a statement.

“To redress this lack of equity, pharma must expand its focus beyond stewardship and the hunt for replacement antibiotics. Access to these new medicines, as well as those already on the market, must get the same level of attention,” she said.

Just over 5 per cent of third-party manufacturing sites that work with the top pharmaceutical companies report compliance with limits on antibacterial waste disposal, the survey found. And only one leading producer is publicly releasing data on the extent of resistance to its drugs.

But the report also identified improvements in efforts to tackle drug resistance, with a growing number of experimental new antibiotics. It rates GlaxoSmithKline and Pfizer as the leading innovative pharmaceutical companies and Aurobindo, Abbott and Viatris among generic providers.

“We see significant progress but resistance has to be tackled in a comprehensive way. Access and manufacturing are issues that go beyond the industry,” said Thomas Cueni, head of the International Federation of Pharmaceutical Manufacturers and Associations.

“When generic drugs are cheaper than the diagnostics for appropriate use, you should not be surprised the best drugs are not used or they are not of top quality,” he said.

While antibiotics target bacterial infections, the symptoms of the diseases they cause are often confused with viral infections like Covid-19 and flu. The drugs — many of which are cheap and often distributed without prescriptions — are sometimes given incorrectly to treat viruses in the absence of accurate diagnostics or alternative medicines, and also used to treat secondary bacterial conditions following viral infections.

The Pan American Health Organisation public health agency this week warned that over 90 per cent of hospitalised Covid-19 patients in the Americas were receiving antimicrobials, although it estimated that only 7 per cent required them to treat secondary infections. 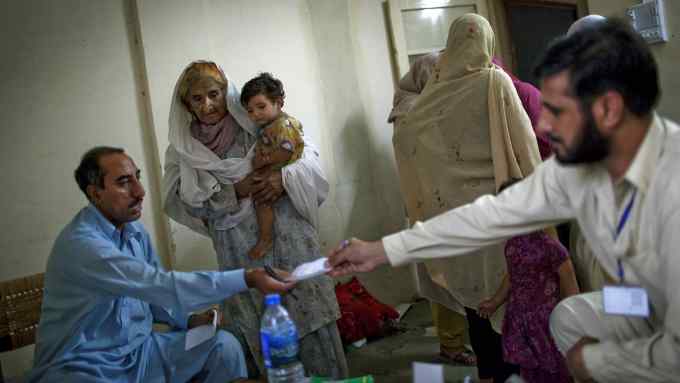