As he ran for India’s highest office, Prime Minister Narendra Modi wooed voters with a promise to crack down on those who had accumulated troves of “black money” — cash earned through illegal means or corruption, or simply never declared to tax authorities.

Mr Modi made good on his pledge on Tuesday with a shock declaration that so-called “high value currency notes” — denominations of Rs500 and Rs1,000 — would not be legal tender as of midnight that day.

The draconian move — which affects some $223bn worth of notes, nearly 86 per cent of the rupees in circulation — has shaken India’s cash-driven economy, damping retail sales and causing mayhem at banks, where old notes are being exchanged for limited supplies of new currency.

But despite the hardships, the abrupt scrapping of the notes has been cheered by Indians, who are now revelling in the prospect of rich, tax-dodging businessmen or corrupt government officials having their secret cash hoards transformed — in Mr Modi’s words — into “just worthless pieces of paper”.

The notes being withdrawn can be deposited into bank accounts or exchanged for new currency until December 30. But authorities warn they will closely scrutinise those depositing more than Rs250,000 [$3,700] — and levy stiff penalties on anyone who cannot fully account for their cash. 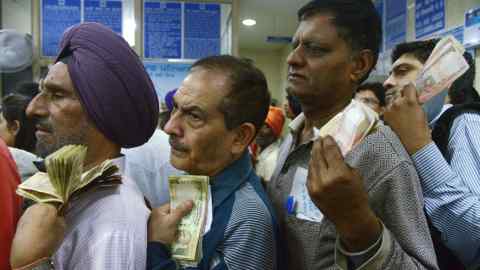 “People had a lot of unaccounted, untaxed money just sitting stashed in lockers,” says Ravinder Dhodi, a New Delhi businessman. “Most of them are now running around helter-skelter trying to figure out if they can even get 75 paisa to the rupee.”

Reports that sacks of burnt rupees were discovered in Uttar Pradesh state and that wads of money were found in the city garbage in Pune have fuelled the shadenfreude stiffening Indians’ resolve to deal with the problems of a severe cash crunch.

“We are used to being without money, but those who store money in sacks — they have to worry more,” says Ram Sajjan, a gardener.

Renuka Gaorie — whose rubbish collector in New Delhi’s upmarket Defence Colony showed her shredded rupees he found in the trash — expressed both support and exasperation.

“It’s about time we had black money removed, but he [Modi] should have gotten everything in place first,” she says. “It’s utter madness.”

The scrapping of the notes is the latest in a series of steps by Mr Modi to target India’s vast black economy, which New Delhi estimates is a third of the size of country’s $2.4tn formal economy.

The government launched a tax amnesty which ended in September under which Indians declared nearly $10bn in hidden assets that were brought back into the formal economy on payment of 45 per cent in punitive taxes. Disclosure rules for cash purchases over Rs200,000 have also been tightened.

“Just by demonetising you don’t achieve that much,” says Saurabh Mukherjea, the chief executive of Ambit Capital, an Indian brokerage. “But it’s worth seeing it as part of a sequence of steps . . . It’s part of an unrelenting journey of pressure on the black economy.”

In the short term, the measure is expected to slow India’s economic growth and hit retail consumption, agriculture and, most critically, the property market.

“It’s going to be extremely painful,” says Laveesh Bandhari, director at the Indicus Foundation, an economic think-tank. “We are going to see a massive, three-month negative impact.”

Prices of property, the asset of choice for those seeking to stash away large sums of illicit money, are expected to fall sharply.

“Everyone who holds real estate as an asset could see a decline in the value of their net worth,” says Jahangir Aziz, head of emerging markets at JPMorgan. “That makes it better for new home buyers. But for existing homebuyers, it’s a hit.”

That, coupled with serious transaction difficulties as the government struggles to replace 22 currency denominations and recalibrate ATMs, is expected to depress consumption for three to six months.

“It’s a temporary heart attack,” says Mr Mukherjea. “Economic activity, especially in this quarter, will be interrupted. We are still a country with lots of small businesses, who do rely on cash to transact.” 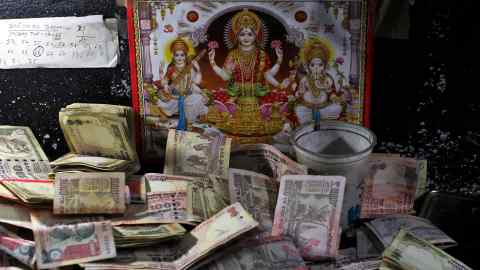 Yet for all the disruption, the cancellation of high value notes may not catch out all black money holders, many of whom are believed to be spending or laundering their cash at a rapid pace.

"There was probably 20 per cent more trade than on a normal day," says Shantibhai Patel, president of the Gem & Jewellery Trade Council of India.

Shopkeepers and contractors — often considered major generators of black money — are said to be asking employees to deposit some of their holdings in exchange for a portion of the funds, or paying workers for up to two years in advance.

Still, economists say India could get a long-term boost as currency flows out of private safes and mattresses into the banking system.