Junk bonds’ stellar run under threat from a hawkish Fed

When US Federal Reserve officials deliver their latest thinking on the future of interest rates on Wednesday, one corner of the bond market will pay particularly close attention.

Speculative grade, or junk rated, corporate debt has endured a sharp pullback in prices ahead of the Fed meeting, with sentiment also darkened by the oil market, which shows signs of cracking under a supply glut.

Both of which have investors re-evaluating the case for owning junk bonds, an asset class that, alongside record-high equities, has been a major beneficiary this year from expectations that Donald Trump’s administration will deliver stronger economic growth and less red tape for US companies.

Junk bonds have been one of the best US fixed income investments so far in 2017, returning 2.9 per cent and outshining investment-grade corporate and US sovereign bonds, according to Bank of America Merrill Lynch.

But a survey of US corporate bond investors this month by the same bank underlines where the market believes the risks are now pitched.

It found there was a strong consensus that, with expectations hardening that the Fed will raise rates at least three times this year, junk bonds as well as investment-grade debt are now overvalued.

“In a big shift, this also has credit investors becoming much more concerned about the rate-hiking cycle leading to wider credit spreads like in 1994,” the survey notes.

There is no doubting that junk bond investors approach the Fed’s March meeting on the back of a stellar run.

Junk bonds have outpaced the monthly returns of Treasuries for eight straight months, matching a record, notes Marty Fridson, the chief investment officer of Lehmann Livian Fridson Advisors. With a broad junk index yielding 6 per cent, yields are near their lowest levels since September 2014.

Lowly rated corporate borrowers have seized on the supportive backdrop to borrow more than $60bn via bonds so far this year, more than double last year’s pace, Dealogic data show.

For the riskiest borrowers — those rated triple-C plus or lower by the major rating agencies — debt issuance is running at its fastest rate since 2013.

More than $11bn has flowed into high-yield corporate bond funds since December, with inflows recorded in 12 of the past 14 weeks, according to data from EPFR.

Last year, high-yield US corporate debt returned 17.5 per cent, ahead of the 12 per cent total return of the S&P 500.

The scale of the advance is testing money managers’ appetite for the risky debt, with strategists at Goldman Sachs last week downgrading triple C-rated debt to underweight after the strong run.

“The value proposition of high-yield bonds has significantly diminished over the past year,” the investment bank warned.

Indeed, gains for junk bonds have been concentrated in the riskiest ranks of the speculative grade universe, with triple-C bonds advancing at a faster clip than higher quality single- or double B-rated bonds.

That includes a sharp rally in debt issued by just a handful of groups including satellite provider Intelsat and pharmaceutical group Valeant, which, along with 18 other groups, account for more than 40 per cent of the spread in the triple-C index.

“There is not much juice left in the orange . . . of corporate bond spreads,” says high-profile investor Jeffrey Gundlach of DoubleLine Capital. “You have a little bit of room of matching the lows . . . but I wouldn't expect much to happen because they almost never go through those levels.”

AnalysisThe Big Read
US Treasuries: On the cusp of a reversal 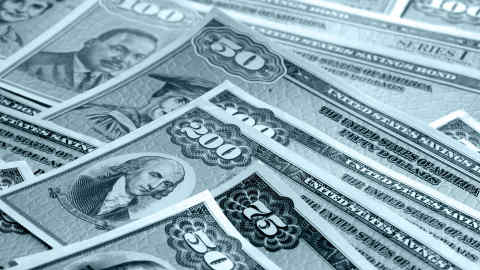 Even if the junk bond market navigates the Fed meeting, it must also confront the re-emergence of a volatile oil price. A week ago, US crude broke out of a trading range that had been in place since Opec, the production cartel, agreed to curtail output in November.

The US oil benchmark West Texas Intermediate falling back below $50 a barrel matters for junk bonds because 14 per cent of the high-yield index is made up of energy companies.

And last week’s sell-off, which saw yields on junk bonds surge the most in a single week in the lead-up to the US presidential election, has pushed out the risk premium, or spread, for owning the junks debt instead of US sovereign bonds. For some, that represents a buying opportunity.

Others are less sure. Steven Logan, head of global high-yield asset management at Aberdeen Asset Management, cautions: “You are not being paid for the risks unless volatility stays low.” These risks could grow on Wednesday.