Many suspects behind murderous markets

Spoiler alert. I am about to give away the ending to the classic Agatha Christie whodunnit thriller, Murder on the Orient Express. There are 12 suspects and it turns out all of them took turns to stick the dagger into the victim.

In the midst of the worst global market sell-off since the great financial crisis of 2008, at least 12 suspects are being named. The most worrying thing of all is that they all had a hand in the sell-off.

The refusal to limit supply allowed oil prices to keep charging down, to levels that almost nobody had planned for. Yes, that is a boon for consumers and for any country that imports oil. But the short-term impact on everyone else, and particularly on the US economy, which has come to rely on the energy industry for its growth, was horrendous.

It was sovereign wealth funds

SWFs were built up largely with the wealth generated from petrodollars. Oil price declines may well have obliged many to start selling. They would generally start selling their most liquid investment, that showed a profit, like Japanese or US stocks. In Japan, SWF fire sales have been openly blamed for the sell-off.

It was the Chinese stock market

The sudden fall in Chinese A-shares, after a bubble, ignited concern last year; the fact that the authorities tried to arrest the fall, and failed, turned concern into alarm. Any indicator of ill health in China is still reason for concern — so resumed pain for A-shares this year damaged everyone.

It was the Chinese currency

Yes, China can rightly argue that its crude devaluations against the dollar last August and again last month were merely to maintain stability against a range of trading partners. But the speed with which reserves are being used, and the apparent eagerness of the Chinese to move their money out of the country, is generating real alarm. A forced Chinese devaluation would be a game-changer.

It was the Fed

This one’s easy. From 2009, stock market gains had tracked the swelling of the Fed’s balance sheet. Everyone was terrified of what would happen when the Fed finally raised. When it did so, it tarried too long, and started to raise rates just as employment gains were petering out and an inventory build-up suggested that the cycle in the US was nearing an end. Once the Fed hiked, in December, risk assets the world over revolted.

US equities
Global stocks on verge of bear market 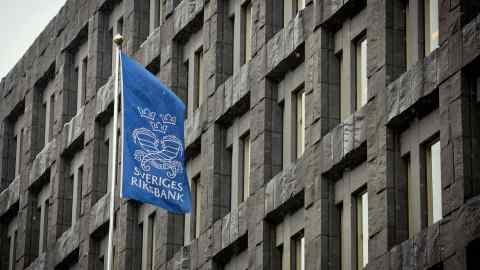 The news on corporate America’s profitability has been lost in the noise of the last few weeks. It would not have been if the results had been any good. But they were terrible. At last count, Thomson Reuters held that the S&P 500 companies were on course for a fall of 4.1 per cent for the fourth quarter of last year. Following gloomy forecasts from companies themselves, the current quarter is expected to be just as bad, while estimates for the year are being slashed.

It was negative rates

Negative rates from Japan, following the European Central Bank and then followed by Sweden’s Riksbank, were meant to show anti-deflationary zeal. Instead, the message was that central banks were prepared to wound the profits of banks, even though they had never been properly recapitalised after the crisis, especially in Europe. A rout in bank stocks ensued. That in turn convinced many that central banks were therefore out of ammunition — if negative rates cannot work, what else can they do?

It was the US economy

When the year started, much of this bad news was in the price — but the conventional wisdom was that the US economy was nowhere near a recession, and this would limit any “downside” falls. The data since then has been anaemic, challenging this assertion.

It was the bond market

Most particularly the bond market is sending a classic recession signal, through a flattening of the yield curve — long-dated bonds now command a much lower extra yield over short-dated bonds than they used to, in what has historically been possibly the most reliable indicator of a recession to come. This has added to the alarm.

It was irrational exuberance

A key argument for US bulls has been that the long rally since 2009 was always “hated” — few ever trusted it. That implied there was further to go before a true market top. But reliable long-term valuation metrics suggested that the US was hugely overvalued and in the grip of irrational exuberance. Once the market turned it was obvious that few saw anything compellingly cheap and so nobody wanted to buy. (This argument does not, however, apply to Europe or the emerging markets, which entered the last few months looking unambiguously cheap).

A popular one. Re-regulation since the crisis has successfully dissuaded large banks from betting with depositors’ money by making markets in bonds and credit. That makes the banks less risky, but deprives those markets of liquidity, meaning that when selling starts, buyers can be hard to find — and volatility and scary falls ensue.

Voters are scaring the poor investors. Whether it is the threat to install a socialist (Bernie Sanders), or a devotee of the gold standard (Ted Cruz), or Donald Trump as president in the US, or the threat to take the UK out of the EU, or the myriad populist movements within the EU, the sense that the population has had enough intensifies. This is highly understandable. It is not reassuring for capital markets.

Also, note that I got through the list without mentioning the words “Syria” — arguably the world’s greatest humanitarian and geopolitical crisis in decades — or “Greece”, which six months ago terrified everyone. Greece’s stock market is the world’s worst performing for the year and the eurozone’s Greek issue has not gone away. But the tragic situation in these countries has had nothing to do with the alarm that has gripped world markets in the last six months.

And most intriguing is another suspect who has gone largely unmentioned. To move to another classic English detection novel, it is like Sherlock Holmes’ dog that did not bark. Nobody is yet blaming governments or their failure to use taxpayers’ money to address the problems.

It is the lack of any attempt at active fiscal policy — in the US, UK, Germany or Japan — that has forced central banks to enter the gap. Now monetary policy seems to have lost efficacy, maybe it is time for politicians to agree on measures like recapitalising European banks, or rebuilding US infrastructure.

As incumbent governments tend to get booted out after people have lost money on the market, politicians need to think about this quick. Or the daggers will be out for them.