From popcorn to packaging: diverse teams give fast-growing businesses another angle

The range of mid-afternoon snacks available in British workplaces has expanded in recent years as employees have embraced a trend toward premium brands and healthier alternatives to traditional chocolate bars and crisps.

The UK premium popcorn brand Propercorn has capitalised on this shift to become one of the country’s fastest growing small businesses.

It has appeared in both the 2017 and 2018 FT rankings of Europe’s top 1,000 fastest growing companies by revenue. Founded in 2011, the company had a compound annual growth rate of 81 per cent between 2013 and 2016. Its popcorn can be found everywhere from corner shops to the sets of photo shoots.

As it has grown, Propercorn’s workforce has diversified: more than half its employees are women and 16 per cent are from ethnic minorities. According to co-founder Cassandra Stavrou, commercial success and a commitment to promoting diversity and sustainability go hand in hand.

“We want to be a relevant brand, and in order to do that we need to represent society,” she says.

Like many successful start-ups, Propercorn did not have diversity goals in its early years, but this has become a priority as it has grown.

“I disagree with businesses that say you don’t have to have some level of proactivity in recruitment to ensure you have diversity,” says Ms Stavrou. “It has to be a meritocracy, but the step before that is casting the net wide.”

Ms Stavrou’s leadership on this issue was one reason why Propercorn was highlighted as a diversity leader in this year’s FT Future 100 UK. The company provides guidance to staff on avoiding bias and focuses on making the job application process as fair as possible. It also has a policy preferring suppliers owned by women or people from minority backgrounds.

Workplace diversity has come under increased scrutiny in the UK this year. In April, new gender pay gap reporting regulations came into effect, revealing that three-quarters of UK companies pay men more than women. But other pay gaps — for ethnic minorities or disabled people, for example — also persist, where data collection is not enforced.

In the context of record low unemployment and a steep fall in EU immigration to the UK, the labour market has tightened. According to the Chartered Institute of Personnel and Development’s latest quarterly labour market survey, 40 per cent of employers said recruitment had become more difficult.

In the coming years it is “highly likely” this market will become more constrained, said the CIPD as it encouraged employers to broaden their hiring pools with “some urgency”.

Many of the FT Future 100 UK diversity leaders did not start out with an active policy.

Leicester-based Clifton Packaging, which makes packaging for the food industry, employs individuals from a wide range of ethnic backgrounds across all levels, from the factory floor to senior management.

Leicester is one of the few places in the UK where white Britons are now a minority population. “As the structure of the city has changed, we’ve followed suit.”

Having a diverse workforce has been an asset when it comes to languages, he says — a mid-level Polish employee recently travelled to Poland to help finalise a deal.

Two global studies by consultancy McKinsey and the Center for Talent Innovation found a correlation between those companies that had strong gender and ethnic diversity and those that reported above-average financial performance. Those with poor employee diversity were also more likely to lag behind the average.

At British counselling chain Harley Therapy, another company recognised by FT Future 100 UK for its progress on diversity, 75 per cent of management is female. The company also employs individuals from a range of ethnicities, one deaf therapist and several with childcare commitments working remotely.

Again, this development was organic. As a start-up with no external funding, the company did what it deemed “best for the business”, says clinical director and co-founder Dr Sheri Jacobson.

Given the workforce that emerged, she felt it prudent to offer flexible work hours. As well as driving employee satisfaction and loyalty, this saved on office costs. “Whoever is best equipped, we will make it work,” she adds.

Relying on organic growth “can only take you so far,” says Sue Coe, head of employment at the Equality and Human Rights Commission.

“It’s really important for employers to be aware of the shape of their workforce, who’s applying for their jobs, who’s being successful, who’s leaving and why,” she says.

In some respects, smaller companies have a competitive advantage: although they often have less capacity to collect and analyse employee data, they tend to be more agile and free from the formalised hiring procedures used by larger organisations, which can have “bias included in them”, explains Claire McCartney, diversity and inclusion adviser at the CIPD.

Nevertheless, it is important to tailor diversity policies to the requirements of each business, she says, adding that artificial or short-term fixes — such as sending managers to a one-day diversity training course — are unlikely to produce meaningful change. 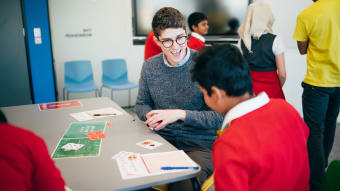