In the test-kitchen with ‘Spotify for foodies’

A new digital service offers a deep dive into great recipes past and present. We cook the books

There’s a lovely essay on cookbooks by the American writer Jane Kramer called “The Quest” from her collection The Reporter’s Kitchen. A cookbook addict, she confesses to owning more than a hundred titles and keeping a pile of them on her bedside table for perusal in the early hours. I don’t read cookbooks in bed but I see the appeal. Recipes can be soothing hypnotics. And what better way to drift off to sleep than pondering balsamic grilled pork ribs or raspberry clafoutis? Such habits seem tame compared with the practices of one couple from Los Angeles who, Kramer reports, read cookbooks aloud to one another in bed as part of their sexual routine. Which ones exactly, I’d love to know.

My relationship with my cookbooks is one of partial neglect. I own dozens in hardback (even more digitally) but only three or four get permanent residence in my kitchen. I also keep a folder of recipes clipped from magazines. But I rarely look at them, preferring to chase down new recipes online. There are some great apps – particularly worth having at your beck and call are The New York Times Cooking app (which features recipes from that newspaper’s pages) and Cooked (an app run by publishers Hardie Grant, Quadrille and Bloomsbury with recipes from their lists), but the one I’m most excited about is ckbk, a £4.99-a-month subscription service that bills itself as “Spotify for cookbooks”.

Ckbk brings together material from all over the world, with more than 100 licensing partners. And, unlike another app, Eat Your Books, which links to free online versions of cookbook recipes, it offers full access to the contents of books (not just ingredient lists) and features hundreds of titles that are almost impossible to find elsewhere. From its current (rapidly growing) inventory of about 500 books (or 100,000 recipes), just under half are out of print.

The starting point was the “1,000 Cookbooks” project, a list of recommendations from hundreds of chefs and food professionals. While the catalogue has noticeable gaps from big hitters such as Nigella Lawson and Yotam Ottolenghi, whose books you’ll be able to purchase as add-ons, it does include insider gems such as Nigella’s favourite, Classic Home Desserts by Richard Sax, and two of Ottolenghi’s essentials, How to Cook a Wolf by MFK Fisher and Food of Life by Najmieh Batmanglij. There’s also a constant stream of new titles, including Prue Leith’s latest, The Vegetarian Kitchen, and 2020 highlight 50 Ways to Cook a Carrot.

With the capacity to search by ingredient, dish, author, title, cuisine, course, complexity, era and diet, you can track down recipes at speed. And compare recipes from books you own with books you have no interest in owning and books you’ll buy after getting your first taste of them here.

The great joy of ckbk is being led down rabbit-holes of discovery. Or rediscovery. At Thanksgiving, thousands of Americans searching for the recipes for corn-bread-sausage stuffing or pumpkin pie from The Silver Palate Cookbook (after the beloved New York gourmet deli from the 1980s) were thrilled to find them online for the first time at ckbk. At Christmas, just as many hoping to locate Josceline Dimbleby’s definitive recipe for mince pies from her 1978 classic Cooking for Christmas (now out of print) unearthed it here. (You can access three recipes a month for free before joining.)

HTSI
In a pickle: the guru of food fermentation strikes again 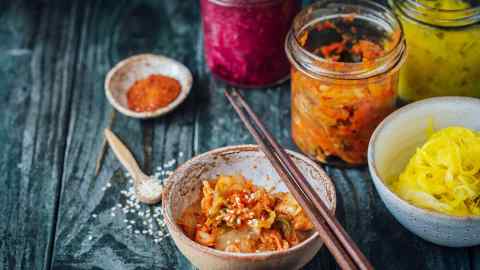 Among the wider selection, there are connoisseur titles such as Sauces by James Peterson and Professional Baking by Wayne Gisslen; reference books like On Food and Cooking by Harold McGee and Larousse Gastronomique (available later this year); and benchmark works such as Escoffier’s Le Guide Culinaire. There are also essentials like Alastair Little and Richard Whittington’s Keep it Simple, and national institutions including George Lang’s The Cuisine of Hungary (exemplary for goulash), Sweet Hands by Ramin Ganeshram (a Trinidadian primer) and the revered Mrs Balbir Singh’s Indian Cookery. The latter was first published in 1961 by romance imprint Mills & Boon, presumably because they recognised its worth as a tool of seduction. I daresay a certain couple from Los Angeles has already given it a go.