Team Canada ‘will come roaring back’

Not long ago, Chrystia Freeland had few friends in the White House.

During bumpy negotiations to overhaul the Nafta trade agreement, which includes the US and Canada, Donald Trump let it be known he was no fan of Justin Trudeau’s then foreign minister and negotiator. While Freeland touted the benefits of multilateralism and multiculturalism, the Trump administration sang “America first” and used trade tariffs as a foreign policy tool.

With Trump now out of the White House, Freeland, 52, who became Canada’s finance minister last summer, is eager to emphasise how blissful US-Canada relations have become.

She says she has “the highest possible regard” for Janet Yellen, the US Treasury secretary, with whom she has had “some very good conversations” and is “philosophically, in terms of economic thinking, well aligned”.

Even on the question of vaccine exports — Biden has reserved home-made jabs for Americans while Canada’s vaccine imports have been plagued by delays — Freeland sees the glass as half full. The new US administration was “extremely supportive”, she says, in agreeing to advance 1.5m doses of the AstraZeneca jab to Ottawa.

“We have an extremely collaborative relationship with this administration,” she tells the Financial Times. “On everything, including the vaccines.”

Foreign policy is one area of alignment that has brought relief in Ottawa. The two countries are both wary of Vladimir Putin’s Russia and staunch supporters of Ukraine’s sovereignty — Freeland is of Ukrainian descent and has been put on the Kremlin’s sanction list.

The Biden administration has also vowed, she says, to help Ottawa secure the release of Michael Spavor and Michael Kovrig, who have been detained in China for more than two years in retaliation for the detention of Meng Wanzhou, an executive at Chinese tech group Huawei, in Vancouver.

It is the countries’ economic responses that show the clearest sign of a renewed mutual understanding. Biden’s $1.9tn stimulus package is certain to boost Canada, which sends three-quarters of its exports to the US. Politically this has given Freeland the opportunity to persuade fiscally conservative Canadians to embrace a more Keynesian approach.

Freeland’s first budget, outlined in April, features C$101bn ($82bn) in fresh spending over three years. The measures throw a lifeline to businesses and workers and also fund long-term projects such as a national childcare and early learning system.

The first woman to hold the purse strings of the G7 economy is loosening them — and is counting on a rebound to improve public finances.

“At the beginning of the pandemic, we took the view . . . that this was a particular kind of recession — more a natural disaster, a wildfire or a flood, rather than an endogenous economic shock. We wanted to prevent hardship and misery but we also had an economic objective, which was to prevent economic scarring. What we observed in the 2009 recession is that scarring made the recovery slower.”

In this, Freeland is in tune with the anti-austerity stance that has driven western governments’ responses to the Covid-19 lockdowns. She says she has been influenced by the thesis developed in 2019 by Olivier Blanchard, a former IMF chief economist, who argued that the costs of public debt were smaller than thought, given that interest rates had generally been below growth rates.

She also believes in a “high pressure economy” in which strong consumer demand can drive companies’ innovation and productivity. 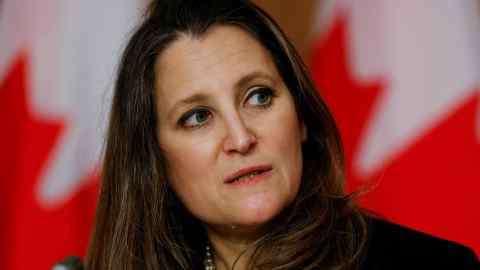 This approach is bearing fruit, she says, as shown by Canada’s economic resilience through the Covid crisis. Its central bank revised its projections for output growth this year to 6.5 per cent, up by 2.5 percentage points on January estimates. Covid is “not yet conquered”, but “Canada will come roaring back”, she promises.

Freeland’s signature budget reform is C$30bn of funding over five years to establish a national childcare and early learning programme, modelled on one in place in Quebec.

A longstanding ambition of Freeland’s Liberal party, the scheme is more likely to materialise because the federal government is ready to contribute, says Grace Skogstad, professor of political science at the University of Toronto.

There is a “patchwork” of provincial systems, Skogstad says: “It’s a provincial capacity. Quebec has a good one, others don’t and people have to use private care. So she is saying [that] we, the federal government, need to fund it and put some conditions to it.”

Freeland says that she is pushing this idea not just for “social and feminist reasons” — “I am a working mother and a feminist”, she says — but also because of the long-term economic benefits of more women joining the labour force. “We think it could be the most significant policy in terms of driving growth since Nafta. It could bump our GDP by 1.2 per cent,” she says.

For all this willingness to spend, Canada’s public debt is forecast to reach 51.2 per cent of GDP, which compares with 90.7 per cent in the EU and 108 per cent in the US at the end of last year. Prudence is part of Canada’s “broader political culture”, Freeland says.

The central bank recently became the first in a G7 country to scale back its monthly bond-buying, a support measure introduced a year ago to absorb the shock of lockdowns. Freeland says: “We are finding our balance between ambition and boldness on one side and being careful and prudent on the other.”

A cloud lingering over Canada’s recovery has been a third wave of infections fuelled by variants of Covid-19, which has overwhelmed hospitals and forced Ontario, the most populous province with 15m inhabitants, to impose restrictions on movement and business activities.

It did not help that Canada’s vaccine rollout was sluggish. This was despite boasts in November that it had placed the largest number of vaccine orders per person of any country.

[Covid-19] is the biggest crisis since the second world war. What Canada needs now is a ‘Team Canada’ approach

The reliance on imports left Canada exposed to vaccine production disruption and the tendency for countries to keep locally made doses. “We have allowed our domestic biomanufacturing capacity to be eroded,” Freeland says. But Canada is now “vaccinating fast and furious”, she says.

Health authorities allowed the use of the AstraZeneca vaccine — which had been under investigation over rare cases of blood clots — for all people aged 30 and over. Nearly four in 10 Canadians have received at least one jab, including Trudeau. While this is slightly faster than Germany or France, it lags the US and Britain.

Nevertheless, the pandemic has cemented Freeland’s reputation as a Trudeau ally able to tackle the hardest challenges. A journalist for two decades, mostly at the Financial Times in Moscow, London and New York, she entered Canadian politics in 2013 and has since earned the nickname “minister of everything” because of the influence she has gained.

After Freeland’s successful Nafta talks, Trudeau asked her to handle the fractious relations with the western provinces whose economies depend on fossil fuel — her native conservative-held Alberta and Saskatchewan. Then, when coronavirus struck, he put her in charge of the Covid-19 task force.

“The PM has huge confidence in her capabilities . . . Rather than minister of everything she is the minister of the hard portfolios,” Skogstad says. “In her short period of time in politics she has not stumbled on any one of them.” Freeland does “her homework”, Skogstad says. She reached “across the party lines” during the Nafta talks and is “an incredible role model for women and how you do politics in Canada”.

Freeland may be more prominent but could she be Trudeau’s successor? This is far from certain. Trudeau is her junior by three years. He would need first to step back from the helm of the Liberal party before a leadership contest in which Freeland could face people such as Mark Carney, the former Bank of England governor, Skogstad says.

For now, the question that preoccupies political circles in Ottawa is whether Trudeau, who has headed a minority government since 2019, will call for elections this year. Polls suggest he could regain his majority in parliament. Analysts see Freeland’s generous budget as a stepping stone.

But Freeland dismisses the idea of electoral manoeuvring while the country grapples with a virulent third wave of infections. “It’s the biggest crisis since the second world war,” she says. “What Canada needs now is a ‘Team Canada’ approach.”

Get alerts on Chrystia Freeland when a new story is published 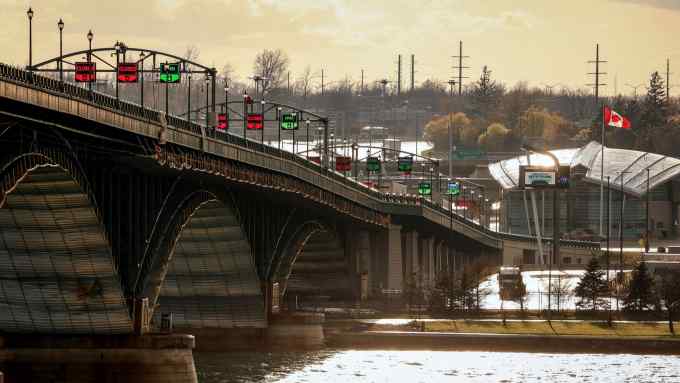