Shares in Tencent fell as much as 10.1 per cent in Hong Kong after Mr Trump issued an executive order that gave US companies 45 days to halt transactions with its WeChat app. A separate order targets transactions with ByteDance’s hugely popular video-sharing platform TikTok.

Tencent’s stock recovered some of those losses to close down 5 per cent. In total, the sell-off lopped off $75.7bn in market capitalisation from Chinese technology groups listed in Hong Kong.

Equity traders said the broad scope of Mr Trump’s statements left open the possibility that the US could bar all dealings with Tencent and ByteDance. That could potentially deliver a serious blow to Tencent’s US gaming business. The company also owns stakes in companies including electric car maker Tesla, games group Epic Games and music streaming business Spotify.

The losses extended beyond the companies named in the bans. Chinese internet groups Alibaba and JD.com fell as much as 6.7 per cent and 5 per cent, respectively. ByteDance, which has been in talks with Microsoft over a mooted sale of TikTok’s business in the US and elsewhere, is not listed on the stock market. 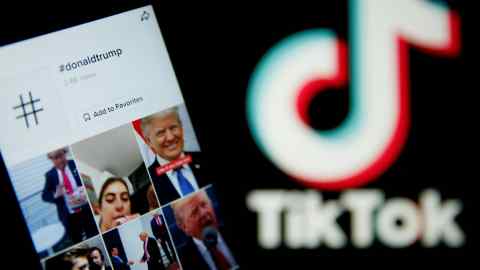 Blocking transactions with WeChat in the US would not seriously impact Tencent’s earnings, said Andy Maynard, a trader at China Renaissance in Hong Kong, but the wording of the executive order was “so ambiguous it can mean anything”.

If the US does ban all transactions with Tencent, “it’s a different ballgame, and that’s what the market is uncertain about at the moment”, he added.

The sell-off also follows a banner year for Tencent, which has profited as more users have flocked to its games during coronavirus-induced lockdowns. Even after Friday’s fall the company’s stock was up more than 40 per cent for the year to date.

“Tencent’s share price had already gone up significantly in the last month,” said Dickie Wong, head of research at Kingston Securities. “After this announcement from Donald Trump it was the perfect time for profit taking.”

The move to potentially bar dealings with some of China’s largest technology companies contrasts with a seemingly more conciliatory approach taken by the White House in recent days. The Trump administration had given a September 15 deadline for Microsoft and ByteDance to negotiate a deal.