A stuttering start to the year for exports of Swiss watches has put brands on alert, stoking fears that a slowing Chinese economy and political instability in Europe may choke sales growth in the coming months.

While the first half of 2018 saw strong growth in Swiss watch exports — up 10.6 per cent on the previous year, according to industry data — this slowed dramatically in the second half. By January 2019, exports by value were up just 0.2 per cent year on year.

This has sparked concern that a cooling-off in China, a disruptive Brexit, protests in France and political tensions in Italy and Spain could weigh on consumer demand for luxury goods.

The sector faces longer-term challenges around identity and relevance, too. As Swiss watch houses adopt an omnichannel approach to forge more direct relationships with discerning consumers, so too must flagship watch and jewellery fairs such as Baselworld — which takes place in the Swiss city of Basel this week — rethink how they serve their audience.

Baselworld, which is 102 years old, and attracts 100,000 visitors over six days, has been forced to reinvent itself after several years of falling exhibitor numbers — culminating in the event’s largest brand, Swatch Group, announcing last summer that it was quitting the show.

Stores are being more cautious with their order books

Exhibitors had long criticised what they perceived to be the organiser’s arrogance and reluctance to seek brands’ input. Market-watchers also say the relevance of trade fairs is fading in a digital era with more direct relationships between brands and consumers.

Baselworld’s owner MCH Group — which also runs motor fairs and ArtBasel among others — last year appointed Michel Loris-Melikoff as managing director of the event, with a brief to transform it for the digital age, review costs and improve dialogue in a bid to stop further exhibitors quitting.

This year’s show marks the chrysalis stage of the event’s planned transformation, with much of its vision for 2020 set to be unveiled over the coming days.

As well as turning the fair into what he calls an “experience platform” for retailers, influencers and collectors, Mr Loris-Melikoff says he is open to the idea of taking the show on the road, mirroring the format of MCH stablemate ArtBasel, which has a presence in other cities including Miami and Buenos Aires. “It could make sense to use this strong presence in Miami, but of course it could also be in other cities,” he tells the Financial Times.

The bigger question for watchmakers is whether the fortunes of their largest consumer markets are also likely to change.

Mainland China — the third-largest export market for watches behind Hong Kong and the US — imported $1.7bn worth in 2018, up 11.7 per cent on the previous year. Yet it reported its slowest economic growth for three decades last year, at 6.6 per cent. This is due in part to the ongoing trade war with the US, which has dented business and consumer sentiment.

The weak renminbi and Chinese government initiatives to drive up domestic consumption through tax cuts have also meant more Chinese would-be tourists are buying at home, which could sting retail demand across tourist destinations worldwide. Stores are being “more cautious with their order books”, says Thomas Chauvet, a luxury goods equity analyst at Citi. “There’s a bit of pullback from watch retailers.”

The effects are starting to be felt at big luxury groups. Swatch Group, which owns Omega, Tissot and the entry-level Swatch brand, blamed lower-than-expected growth in 2018 on a “downturn in demand” in Asia, as well as France’s gilets jaunes protests. Chief executive Nick Hayek told a press conference last week that tourism in France remained “hampered” going into 2019, and that the group’s sales there are “still in the red” compared with this time last year.

Swatch is slightly more exposed than its peers to competition from smartwatches and cheaper watches made in China, as its low and mid-priced ranges account for about a quarter of its revenues, Mr Chauvet notes. Its share price is down about 25 per cent year on year.

Richemont, which owns Vacheron Constantin and Cartier, was similarly forced to close stores in Paris for several weekends in the fourth quarter of 2018 due to the unrest, damaging its sales in Europe. Its share price is currently down about 14 per cent in the past year. 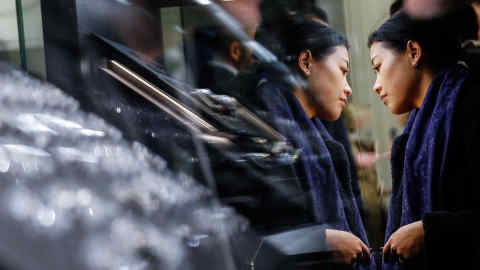 Although luxury group LVMH also had to close some French stores and has a large exposure to China, it has fared much better, in part due to the performance of its luxury goods beyond watches. The owner of Louis Vuitton, Bulgari and Tag Heuer reported record results in January, with net profits up 18 per cent to €6.35bn. “The market sees the glass as half empty. We see it as half full,” Bernard Arnault, chairman and chief executive, said at the time.

The industry’s renewed momentum in the US and Japan — where Swiss watch exports were up 9.1 per cent and 28.8 per cent year on year, respectively, in January — is cause for cheer. The growth goes some way to offsetting the gloomier outlook in Europe, where sales have softened in France, Italy and Spain as political uncertainty weighs on consumer sentiment and tourism.

The fall in sterling after the Brexit referendum initially was good news for domestic watch retailers, as tourists flocked to the UK to take advantage of the cheap pound. But a chaotic Brexit could see this trend reverse, warns Karine Szegedi, head of luxury at Deloitte Private, a division of the global consultancy: “Obviously if prices go up because of taxes and duties in the UK then there will be a direct impact.” 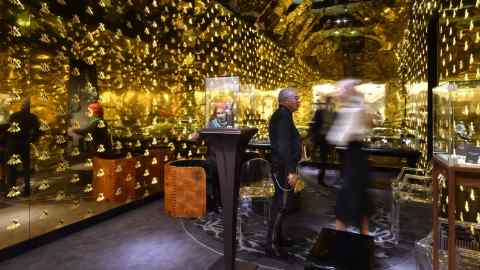 Last month, Britain signed a trade deal with Switzerland — its biggest since the Brexit vote in 2016. The UK trade department said the so-called trade continuity agreement would mean “precious stones and metals exporters could avoid up to £4m” in tariffs.

Still, in the event of a disorderly Brexit, new layers of customs checks risk a logjam at Britain’s border. Indeed, a peak in UK watch imports in January suggest distributors are “stockpiling” inventory ahead of possible disruption, observes Mr Chauvet.

At Baselworld, the mood is one of cautious optimism yet some remain sceptical about its chances of success.

Gianluca Maina, chief marketing officer at Geneva-based jewellery maison De Grisogono — which pulled out of Baselworld this year — says the way business is done is changing.

He commends Baselworld’s efforts to improve exhibitors’ experience, but brands like his are seeing the value of running smaller, targeted events. For De Grisogono, that means aligning product launches more closely to the fashion calendar.