“I’d rather not mention the first work of art I bought!” says the Hong Kong restaurateur, property investor and art collector Alan Lo. “It was a mistake! But I managed to get rid of it later.

“It was by a contemporary Chinese artist. I bought it at auction in 2008, at a time when everyone was going crazy about all things Chinese,” continues Lo, with a burst of laughter. “Things were very different 10 years ago!”

This is recounted with another burst of laughter, Lo swinging back in his chair to further emphasise the humour. We are speaking over Skype, Lo in Hong Kong and me in London. Looking younger than his 38 years, Lo is smartly dressed in a neat, pale raspberry-hued jacket with a small silk square tucked into the pocket and open-necked white shirt. Behind him hangs an ink painting by Nancy Chu Woo, the undated “Iceberg”.

Born into a family where art collecting was firmly established, Lo was already going to auction previews with his father, Victor, at the age of eight. Chairman of the manufacturing business Gold Peak Industries, Victor Lo has been an avid collector of Chinese ink painting for almost 40 years, as well as being active in the arts community. He is heavily involved in the long-delayed museum M+, as chairman of its board and acquisitions committee.

So it is probably inevitable that Lo would collect; even before he started buying, he had been asked to serve on the advisory board of Art HK, the international art fair founded in 2007, which was subsequently bought by Art Basel in 2011 and became Art Basel Hong Kong.

“That was an interesting time,” says Lo. “Art HK was quite an eye-opener; people weren’t used to buying from galleries on the primary market — the benchmark was auction. The fair opened up a whole new dialogue here.”

Lo qualified as an architect, but never practised — “I knew I wasn’t going to become a good one!” he says. He was more interested in the hospitality industry, and started founding stylish restaurants — of which there are now 12, in Hong Kong, Singapore and Shanghai. After his marriage to boutique hotel entrepreneur Yenn Wong, in 2013 they co-founded Duddell’s, the restaurant/club/art space that has now extended to London. “At the beginning, I was collecting contemporary Chinese art, but I slowly evolved into other areas — Japan, Korea and south-east Asia — and in 2011 I bought my first western work of art: a Sterling Ruby collage,” he says.

The idea of a museum ‘has definitely crossed my mind. But it needs to be relevant to the community’

Today his collection numbers about 100 works, and ranges widely — from Danh Vo to Zhang Enli, Yayoi Kusama and Paul Chan. “I am a bit of a sucker for large-scale works which don’t fit either in the lift or the stairs,” he chuckles. “And Hong Kong flats have low ceilings — for a long time I had to put a Liu Wei on its side!”

I wonder if there is a guiding line in his buying. “For a little while I thought I should be like my father, who has the ultimate, totally focused collection,” says Lo. “But after a while I gave up, now my collection is just growing organically. And I have a full-time career, so I can’t do all the homework, and if you aren’t doing the homework, let someone else do it. So I used an adviser.” That adviser was the Hong Kong-based Jehan Chu, who is now concentrating on another field; as a result, says Lo, “I’m having a break, exploring other options.”

He buys rapidly, and admits he sometimes makes mistakes. “Then I keep it in storage, I try not to think about it,” he says with a laugh. “I always hope some day some magic will happen . . . ”

So will he make a museum one day? Lo thinks a little before replying. “It has definitely crossed my mind. But you need to think what the purpose is. Is it a response to the needs of the local community? And you have to think how you would position it with artists and the public.” In fact, he would like to establish something — “I think there is something missing, I don’t know what — but I do know it needs to be relevant to the community.”

Lo knows what he’s talking about — he is already highly active in the arts community in Hong Kong and elsewhere — as chairman of the grant-making Design Trust, sitting on Art Basel’s Global Patrons Council, the Tate Asia Pacific Acquisition Committee as well as being a board member of the non-profit art space Para Site. I ask him about the M+ museum, the recently opened Tai Kwun cultural site and other such initiatives. Is Hong Kong now catching up, culturally, with other centres?

“We’ve come a long way in the last 10 years,” he responds. “And in fact it is wrong to think that the collector scene is so recent — decades ago people were collecting ink painting, classical furniture and so on. But the difference is today’s focus on contemporary art and design. I think there is some way to go, though. You can’t rely on one institution such as M+ to do everything, and to have a healthy ecosystem you need artists, curators — and we have a huge shortage of curatorial talent. And there are needs on the art logistics side! I would ask the government for land to build a first-class art storage warehouse!”

Speaking of the government, I wonder whether Beijing’s tightening grip on the territory can impact on Hong Kong’s art scene. “For sure, we are becoming more Chinese,” he responds. “And there are instances of self-censorship. No doubt M+ is being closely watched, but the saving grace is that their board has fought to protect the core values of the museum. I think here in Hong Kong, you can talk about everything except any discussion about independence. Neither the local government nor Beijing will tolerate that.”

We move on to talk about Duddell’s, which during Art Basel Hong Kong is showing works by two Chinese artists, Wang Guangle and Li Shurui. They are from the collection of Lo’s friend, Frenchman John Dodelande, and the show is curated by Jérôme Sans. “I was intrigued as to why John collected Chinese art, so I decided to do this project. And I am so happy to have Jérôme to curate it!” says Lo. And with that, and another burst of laughter, he bids me goodbye.

This article has been amended to reflect the fact that the painting ‘Iceberg’ was by Nancy Chu Woo, not Grace Woo

Explore the series
READ MORE
Ceramicist Lubna Chowdhary: ‘The language of white male artists was being presented to me all the time’ 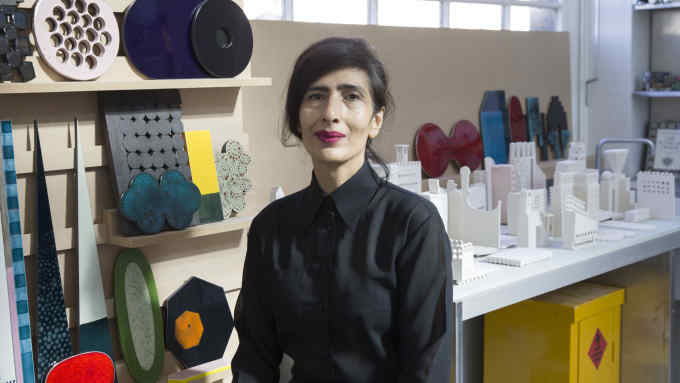