Half head, half guts: LVMH man’s maxim for leadership

As opening gambits go, Stéphane Bianchi’s is one of the more guarded. “I say no to most interviews,” begins the head of the LVMH watches division, which includes TAG Heuer, Hublot and Zenith.

“I don’t want to say anything about strategy because we’re working on it — and anyway, I don’t want to be too precise because it only benefits competitors.”

If that remains his position, Mr Bianchi will cut a very different figure from his predecessor, with whom inevitably he will be compared. In November, the mild-mannered Frenchman took over from industry veteran Jean-Claude Biver, a vocal character known throughout the industry for his candour and showmanship. Mr Biver, who had been suffering from ill health, has since moved into a non-executive role in the division.

Dressed in a modest blue suit and white shirt, Mr Bianchi looks comfortable in the plush surroundings of Geneva’s Kempinski Hotel. While he might come across as more reserved than his predecessor, he appears no less determined.

“[He] is very famous, but I’ve taken over from many great men and founders, and I’ve never looked at myself taking over from someone else. I’m taking over a brand. It’s completely different.”

I’m not here just to manage things as they are. I’m here to grow our brands

He arrived aged 54, with no watch industry experience, typically a prerequisite when taking the reins at the biggest names in watchmaking. His perspective is that he likes “working with family-owned companies — even if that company is huge”. LVMH describes itself as a “family-run group”, with more than 150,000 employees.

Mr Bianchi has form here. In 1994, after a stint with now-defunct accounting firm Arthur Andersen, he joined family-run French cosmetics group Yves Rocher, becoming its chief executive three years later, aged 33. He was tasked by Mr Rocher, the founder who died in 2009, with buying back shares that he had sold in the early 1970s, after he was told by doctors — wrongly as it transpired — that he was dying, according to Mr Bianchi.

At the end of 2012, he says, he had delivered the brief. “That was a good time for me to leave,” he adds — though the family convinced him to stay another three years.

“I wanted to buy my own company,” he explains. “To be alone without anyone looking over my shoulder.” By his own admission, it didn’t work out. “This was a failure because I did not succeed,” is his simple summary. “I could not find a very good brand, a brand I could fall in love with and for a good price.”

So in 2016, he joined the board of Maus Frères, a family-owned Swiss conglomerate that operates sportswear and outdoor brands Lacoste, Gant and Aigle, among others — a position he has retained since joining LVMH.

He had met Bernard Arnault, chairman and chief executive of LVMH, informally a few years before he was approached by him last year to take over from Mr Biver.

LVMH — whose other subsidiaries include Louis Vuitton, Dior and Bulgari — says its watches division contributed €4.1bn to group sales of €46.9bn in 2018. “This division might [be able to] occupy a bigger place within the group, but that’s a real challenge because this is a fashion group,” Mr Bianchi says.

While he holds back on details of the division’s current performance, he says growth is “not far off being in line” with 2018 export figures reported by the Federation of the Swiss Watch Industry, which grew 6.3 per cent year on year.

“I’m not here just to manage things as they are,” he insists. “I’m here to grow our brands and the division as well.”

Alongside his role leading the division, Mr Bianchi, who lives in London with his family, has also become chief executive of TAG Heuer, which is based in the Swiss town of La Chaux-de-Fonds.

He is a longtime watch collector and is enjoying getting under the skin of the division’s three brands, he says. “I’ve been working with brands for years and I need to understand them before launching a strategy,” he says. 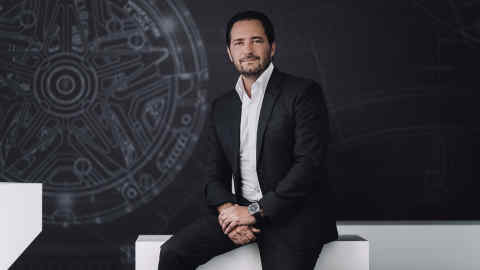 TAG Heuer has the highest revenues in the portfolio, he says. He describes its price positioning as “perfect” and the “entry to luxury”. Hublot has the strongest presence of the three in China, he notes, while Zenith and TAG Heuer have “huge work to do” in the Asian market. He believes Zenith, the smallest of the three brands, “deserves to be much bigger than it is now”.

Mr Bianchi admits he still harbours an ambition to have his own company. “Yes, it does remain, but now I want to build something within the division,” he says.

Still, that comes with its own risks. “I’m not paid to establish something wrong,” he says. “I’m paid to succeed.”