At a time of heightened public concern over the sharing of personal data, not to mention questions over the value for money provided by either lawyers or US healthcare institutions, Mark Barnes stands out as a true innovator.

The Ropes & Gray partner was praised by judges for the originality of his work to facilitate the sharing of clinical trial data for the greater good of furthering research into human health. The Vivli digital platform he co-founded tackles what he describes as the potential for collision between the benefits of big data and individuals’ push to own their personal information. He says the platform fulfils a collective need that individual institutions would be unable to meet in isolation while protecting the right to privacy.

He also contributed to a broader legal solution to such tensions with an article in the New England Journal of Medicine that he described as a charter for an “emerging national consensus supporting clinical data transparency”.
Leyla Boulton, Chair of judging panel
Profiles compiled by RSG researchers and FT editors.

After five years as executive vice-president at St Jude Children’s Research Hospital in Memphis and then as an adviser and senior associate provost for research at Harvard University, Mark Barnes returned to Ropes & Gray, where he had been between 2001-07, to continue his work in a legal practice that sits at the intersection of law and medicine.

In 2018 he co-founded Vivli, a non-profit organisation that promotes the sharing of data from clinical research trials. This allows the information to be aggregated, reused and analysed in order to advance scientific research into human health. The legal, ethical and practical issues involved are complex. Mr Barnes says: “We have two worlds in collision — on the one hand, with the promulgation and proliferation and uses of big data, is the idea of transparency and that data should be used and deployed and should bring good and bring profit; on the other, we have the push towards privacy with people saying they own their data and want to control their data.”

Over his career, Mr Barnes has contributed to healthcare programmes globally as an academic and policy adviser. While at St Jude, he established a vaccine study centre in the Eastern Highlands of Zimbabwe with Africa University. He also served as executive director of Harvard’s Aids treatment programmes in Nigeria, Tanzania and Botswana.

Mike Cowie worked at the Federal Trade Commission in the 2000s where he led a group looking at hospital mergers. His team’s approach placed less weight on market share and more on commercial realities and this has had a lasting effect on mergers in the industry.

Since joining law firm Dechert, Mr Cowie has given advice on some of the most complex antitrust approvals in the healthcare sector. In 2018, he worked on the $70bn takeover of Aetna by CVS Health. In the face of heavy opposition, Mr Cowie helped win antitrust approval. He spoke of the scale of the deal and convinced authorities that patient care would be better as a result. He also used various analyses to show that a larger company could draw on big data to improve efficiency. Six years earlier, Mr Cowie had been involved in the $29bn sale of Medco to Express Scripts.

Mr Cowie says the greatest change he has brought to antitrust practice has been to build in the views of other professionals, including public relations, investor relations and government affairs experts.

As an associate in 2015, Chantelle Cseh designed a model to conduct a paperless trial for the Husky Injection Molding Systems v Robert Schad litigation. It has been dubbed the “trial by iPad protocol” and has set a precedent for paperless trials in civil as well as family, criminal and personal cases in Ontario, Canada.

Ms Cseh’s model includes processes to allow judges and counsel to use iPads or other tablets to navigate documents. It increases efficiency and speed and reduces the costs associated with preparing court documents. She sees tablet computers as an equaliser. “Regardless of education, socio-economic status or ability, tablets have proven to be user-friendly and accessible to all,” says Ms Cseh.

Her role also includes directing her law firm’s paperless office initiative and its skills and training scheme to encourage lawyers to move towards technology-led ways of working. She has run seminars for other law firms and in-house lawyers to encourage them to embrace the digital practice of law.

Smaller businesses in Mexico contribute an estimated 40 per cent-plus of gross domestic product and account for nearly 80 per cent of employment. Yet access to capital and legal advice for companies is often unaffordable.

To help solve the problem while also building a sustainable practice, Jean Michel Enríquez created Creel Emprende, which offers fixed-fee support to emerging companies, start-ups and venture capital firms in exchange for a commitment to work with Creel on fundraising or other transactions. As part of the programme, the firm also provides training and introductions to international law firms.

To help remedy a lack of legal training in Mexico, Mr Enríquez also co-created Diplomado Creel, which was set up to provide clients with training.

He has helped transform the firm itself from the inside. With his partners, he turned the group’s remuneration system into a lockstep model that links equity partners’ profit share with length of service. He credits this with increasing collaboration.

Leading the corporate department at a 200-year-old law firm with a premium reputation is not without its challenges. To stay ahead of trends, Mark Greene believes the best approach is to “double down on the firm’s DNA”. This means investing more in lawyers’ training and development to turn them into creative, commercial and nimble generalists. One new initiative included a substantial orientation programme for new partners.

Mr Greene has also worked on many complex M&A deals, including pharmaceutical company Mylan’s pending $50bn combination with Upjohn, a division of Pfizer. In 2015, he advised Mylan on a successful defence against a hostile bid by Teva Pharmaceuticals. This involved setting up a foundation in the Netherlands to take advantage of an obscure aspect of Dutch law called a “stichting”.

When he took over leadership of the international practice of the New York firm, he rebuilt its network of international law firm partners to ensure that the firm can advise on large cross-border matters.

One of his first actions was to launch Project Redefine, which involved 35 initiatives designed to shape a more innovative culture. He also created an ideas competition and an innovation and new ventures partner position.

In 2017, Hogan Lovells achieved £2bn in annual global revenue, moving into the world’s top 10 largest law firms by revenue. This year, the firm tops the Financial Times ranking of the most innovative law firms in North America.

Roger Meltzer believes diversity and inclusion are moral and business imperatives, for his firm and for the profession. He has used his profile as a leader of one of the largest law firms to help develop new practices and organisational culture. DLA Piper was an early adopter of the Mansfield rule, inspired by the Rooney rule in the US National Football League, which requires teams looking to fill senior coaching jobs to interview at least one ethnic-minority candidate. The firm achieved Mansfield Certified Plus status in 2018 for not only ensuring 30 per cent of job candidates came from under-represented groups but also appointing at least 30 per cent into key leadership and partner roles. In its recent round of partner promotions, 14 of 23 were considered diverse.

Most recently, Mr Meltzer formed a partnership with the New York University School of Law’s centre for diversity, inclusion and belonging, to help it test its approaches. This involved the creation of interactive training workshops, rolled out for every lawyer in the US firm.

Staying ahead of a fast-moving and dynamic field is Karen Silverman’s speciality, and this has driven her to develop a new service for clients. Ms Silverman began a practice advising company leaders, boards and judges on the questions, risks and steps around the implementation of artificial intelligence and other technologies. She advises on a range of areas including regulation, governance, competition and cyber security.

She says: “The key is remaining relevant to clients who are moving quickly and looking for guidance based on both experience and an understanding of where things are heading.”

Ms Silverman is co-ordinating Latham & Watkins’ partnership with the World Economic Forum’s Centre for the Fourth Industrial Revolution and is part of its team seeking a way to assess and better understand the risks and opportunities around AI.

She was an early adopter of tools such as predictive coding, which is used to speed up the review of documents. It has given her fresh insights into both the benefits and difficulties associated with technology.

As a technology and then privacy lawyer, Kirsten Thompson recognised the importance of data early on. “While privacy law was still in its early days, I began to realise that the pressing issue was not going to be privacy per se, but the larger issue of the regulation of data more generally,” she says.

This year Ms Thompson launched Dentons Data, which combines legal advice with non-legal services including data mapping and IT security and process management to help clients with data strategies on fixed, project-based fees. The team can now offer an end-to-end service to manage cyber breaches covering the legal, forensic and technology aspects of the response. The multidisciplinary service draws on what Ms Thompson says she wanted while working as an in-house lawyer at a technology company.

Litigator Jim Walden set up his law firm in 2015 and has gone on to achieve success in public interest cases that range from class action litigation to public campaigns and lobbying.

Mr Walden helped draft the Rodchenkov Anti-Doping Act (passed in 2018), which criminalises doping fraud in international sporting events that include US participants. The act broadens punishment to include not only those who dope but also coaches, officials and doping rings.

He also brought a class action on behalf of parents against New York’s education department for failing to enforce school anti-bullying rules. The settlement led to new protocols and electronic reporting systems. 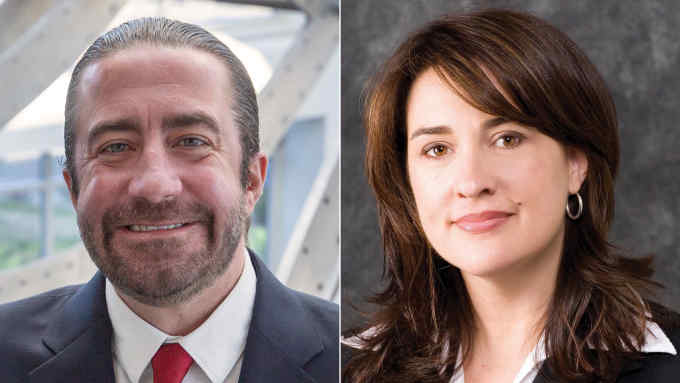