UK equity funds have bled more than $2bn over the past two months, highlighting the extent of investor unease as a no-deal Brexit becomes increasingly likely.

Investors have pulled a net $2.4bn from funds exposed to the UK stock market since the start of October, according to data provider EPFR Global.

Britain’s trade talks with the EU have become increasingly fraught in recent weeks, with both sides warning that the UK may crash out of its Brexit transition period without a trade deal in place. As the talks entered their final stretch ahead of the Sunday deadline, UK prime minister Boris Johnson said a no-deal Brexit was a “strong possibility”.

The latest withdrawals bring UK equity fund outflows since the Brexit referendum to $42bn — almost 17 per cent of total assets held in the strategies in June 2016. This figure is for flows out of open-ended UK equity funds globally until the end of October 2020.

The continued Brexit uncertainty has also hit the appeal of UK stocks among portfolio managers. The average level of UK exposure in global equity funds recently fell to an all-time low of 5.8 per cent, compared with almost 9 per cent at the start of 2016, according to Copley Fund Research, a consultancy.

Camilla Cavendish
On Brexit, the Tories have fallen prey to magical thinking 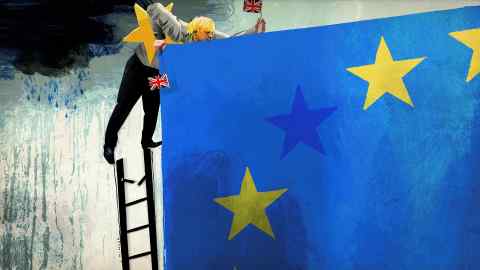 UK stocks have been battered by Brexit uncertainty over the past four years. This underperformance has been exacerbated in 2020 by the coronavirus pandemic, which has forced a wave of British companies to impose brutal dividend cuts.

The FTSE All-Share index is down 12 per cent since the beginning of the year, while the US S&P 500 has risen by 12 per cent.

However, the broad shunning of UK stocks has led some hedge funds, including Marshall Wace, to start betting on a rebound.

Global equity managers have scaled back their exposure to a number of previously dividend-rich UK sectors, such as energy and financials, Copley found.

Just 28 per cent of the funds in Copley’s sample have exposure to UK energy companies, compared with 46 per cent at the start of 2019. Meanwhile, 51 per cent of funds are invested in UK financial stocks, against 64 per cent two years ago.

Deal or no deal, the end of negotiations should lift some of the uncertainty that has plagued UK equities for the past five years

Managers have instead piled into technology and consumer goods groups elsewhere, such as Chinese ecommerce giants Alibaba and JD.com, and Taiwanese chip manufacturer TSMC, said Copley.

Despite the no-deal fears, some investors are upbeat. About $100m flowed into UK equity funds while the UK-EU talks were taking place during the week, before ending on Wednesday, said EPFR.

Alex Wright, manager of the Fidelity Special Situations fund, said he was reassured about UK companies’ preparedness for no-deal by the “robustness” of supply chains in the pandemic.

He added: “Deal or no deal, the end of negotiations should lift some of the uncertainty that has plagued UK equities for the past five years.”

But veteran UK equity manager Richard Buxton of Jupiter Asset Management, warned that international investors who had cut their UK exposure would not necessarily rush back once clarity emerged about Brexit.

“I believe that the process will be slow, and that many will want to wait and see how the UK fares outside of the EU,” he said.