The perfect age to plan a round-the-world trip

Turn your silver years into golden moments of discovery

They say that youth is wasted on the young, but in reality, time and money are two limiting factors making it hard for younger people to properly appreciate the worlds they encounter.

As a foreign correspondent, I frequently travelled on business to far-flung destinations that my peers could only dream of visiting. But this was no holiday — there were always serious wars intruding, and tomfool requests from HQ about where to put the “ka-boom” flash on a map marking a Vietcong explosion. On the more sedate missions, days were filled with interviewing dull bankers, while fielding endless demands from the newsdesk to chase elusive bigshots of the moment.

Nevertheless, I managed to squeeze in some short breaks to try to understand the wider world. After interviewing the president of Afghanistan, I went by road to Jalalabad to see the most exquisite Buddha statues being excavated, and then on through treacherous twisting mountain gorges where British forces were slaughtered in 1842. While writing a large FT survey of India, I managed to infiltrate ordinary life in a poor village into the paper.

At every turn, my lack of time and money cut the adventure short. For every trip, editors back home wanted tomorrow’s story yesterday, and the accountants would allow only strict newsgathering expenses.

It was a similar story for my homebody colleagues with mortgages and 2.2 kids, which constantly squeezed their focus to the here and now.

But now with our children grown, mortgages paid off, and the daily working grind easing towards retirement, the pressures of time and money are fewer. Opportunities abound to turn our silver years to golden moments of discovery.

If you’re anything like me, you will have a very long list of destinations that you want to tick off. One way to explore the globe is to buy a round-the-world air ticket, allowing you to circumnavigate the planet from west to east or east to west, so long as you keep moving round in the same direction.

Legendary round-the-world airlines like Pan Am and TWA have gone, and their successors are not interested in the romance of epic voyages.

“Round-the-world is not profitable,” said a senior executive of an airline whose predecessor once girdled the globe. “These days, we prefer hub and spoke flights.”

Modern aircraft can fly longer distances. Nonstop flights from London to Hong Kong and Tokyo, and from New York and Washington to Asia are commonplace. If you have the stamina for a 17-hour flight, London to Australia has now started.

But you don’t get much of a view from 39,000 feet in a metal cigar tube, especially if the lights are out and the blinds down even in broad daylight. 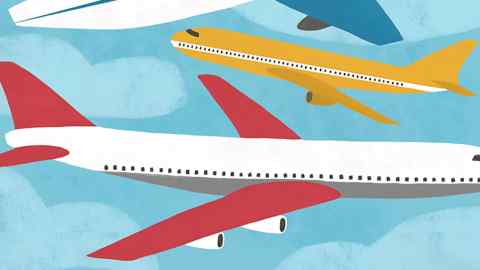 The round-the-world way to fly is via airline alliances, of which there are three majors:

All the alliances offer round-the-world deals bookable on one website, but they do not headline the prices. You have to sketch your itinerary and may have to put in individual flights to persuade prices to appear.

I tried a route from London to Prague, then to Delhi, Bangkok, Tokyo, Sydney, San Francisco, New York and back to London in business class — since it is important to have a modicum of comfort for such a long journey that may embrace 16 stops and take up to a year.

Star Alliance came in the cheapest at £6,260. SkyTeam offered £7,056. Oneworld was £7,206.90. In all cases, a large chunk of the fare was taxes. Note that I started with a short hop from London to Prague to avoid the swingeing London long-haul departure tax — £156 for anything beyond vanilla economy and set to rise to £172 from April 2019 — whereas the short-haul tax for business is £26.

Most travel gurus claim it is easy to beat a single alliance’s round-the-world price through judicious swapping between alliances and maybe throwing in a few budget airline fares. But there may be an exorbitant price to pay if you have to reschedule flights, whether this is because you fall sick or want to stay longer or even to leave a place earlier.

Airlines have got greedy. In the old days of paper tickets, a round-the-world journey could be a concertina of tickets written by hand. But provided you did not change the itinerary, ticketing staff would cheerfully change the dates for free. In these computerised days, airlines demand payment for any slight change.

On a recent journey, I had a return economy ticket from Asia to Seattle costing $1,500 which I upgraded to business class using frequent flyer certificates. I asked to return a day earlier. The airline said I would have to pay $2,900 for the economy one-way ticket to Asia — that day’s price — plus I could not upgrade to business, and they would charge an extra $250 for reissuing the ticket.

Whereas if all you are asking is a date change on a single alliance round-the-world ticket, you may get away with a $150-200 penalty to keep the computer happy.

Round-the-world is not for everyone. If you want to explore the great museums of Europe, the Louvre, the Uffizi, the Vatican, or to compare and contrast the magnificent architecture of the churches of England, France and Italy, better to take local flights and short journeys, or go by train. If you only want to visit friends and relatives abroad, it is better to look at point-to-point fares.

But if you have the ambition of exploring the civilisations of Egypt, India, China, America, or thirst to experience the world’s great deserts, rivers, mountains or waterfalls then start planning your trip today. Sketch out an ideal itinerary, check this against dates and flights and prices, and consider going to a trusted travel agent to check the fine print and penalties before you buy. Bon voyage!