Inside the interiors store reinvigorating the city’s cultural centre

“We wanted a place that was accessible, warm and welcoming,” says Joel Malin of Modern Times, the vintage furniture, art and design shop that he opened with his wife Amy in Melbourne in 2012. “It doesn’t matter if you’re a student, an architect or someone who works in a café down the road – if you’re interested in design and you want to talk about it, learn about it and look at it, you’re one of us.”

Fitzroy has a long history of nurturing artists, designers, makers and musicians – it has been the cultural centre of Melbourne since the early ’80s – so it was a natural choice to build a store there, says Malin. The showroom itself is open, spacious and bright: vintage furniture sourced in Europe and restored in their Melbourne workshop, contemporary Australian art, and all manner of curios are arranged into vignettes suggestive of how the pieces could look in a home. “Sometimes there’s a specific theme, sometimes we’re just going on a vibe,” says Malin.

One such scene recently included a reupholstered 1970s Sesann armchair by Gianfranco Frattini for Cassina (A$8,900, about £4,800) paired with a sinuous set of shelves by designer Nicole Lawrence (about £657). Original artwork by Melbourne-based painter and designer Taj Alexander (from about £323) and local photographer Cricket Saleh (from about £756) complete the tableau.

As much a furniture showroom as an art gallery, the space frequently features pieces that blur these lines. “We’ve evolved over time, but currently we see ourselves at the intersection between furniture, design objects and art,” Joel says. One example of this melding is the handmade-to-order pink Cosmos coffee table (about £2,670, limited to an edition of 10) by Adelaide-based ceramicist Ebony Heidenreich. It’s a generously proportioned, showstopping piece made from reclaimed clay from the artist’s studio. “It’s also very sculptural and textural,” adds Amy. Call it “functional art”.

Both Amy and Joel are immersed in Melbourne’s art community, so discover talent at artist-run spaces and exhibitions as well as through word of mouth and Instagram. One artist they have a long relationship with is American-Australian photographer Brooke Holm, whose dramatic landscape pieces have been an ever-changing fixture for seven years. Her latest series, Sand Sea (from about £1,177), beautifully captures stretches of the Namib Sand Sea.

HTSI
Cult Shop: Labour and Wait – the store that made a £6 loo brush a must-have luxury 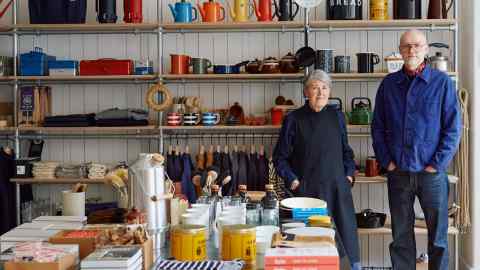 Building relationships between artists, designers, makers and customers is a big part of Modern Times’s practice. “It’s an opportunity for people to try out new designs, and for us to give new artists a platform,” says Amy. “We are more than the products we sell on the showroom floor. More than anything, it’s about the community.”