In the week he debuted his new label in Florence, the creative dynamo talks canvases, collages — and clothes

I am talking to Sterling Ruby, the 47-year-old American artist described as one of the most interesting to emerge this century. We are speaking via phone because Ruby is based in Vernon, California, roughly five miles south of Los Angeles. There is a lot of banging on the line, because someone close by has decided to begin work welding one of Ruby’s monumental sculptures together. He drops the line and calls me back from a quieter space.

We are talking because Ruby is getting into fashion.

That is actually a misnomer: Ruby has always been into fashion, has been working in fashion for a while, and his pieces have been in fashion for a decade or so. His art is known for being rampantly multidisciplinary; he creates paintings and sculptures, but also ceramics and textiles, and has an affinity for collage where he can combine all of the above. Many pieces involve textiles specially treated with splatters of bleach or paint, or have bits of American-style patchwork quilts attached. His spray-painted works, enigmatic vistas of pigment, set collectors back more than £400,000. Those collectors include every major museum of note — MoMA, the Whitney, Tate, Centre Pompidou — and private individuals, notably the Belgian fashion designer Raf Simons.

In 2012, when Simons was artistic director of womenswear at the house of Dior, Simons translated one of those spray paintings to a chiné woven silk for his debut haute couture collection, as documented in the film Dior and I. He texted a picture of it, delighted, to the artist. Two years later, Simons and Ruby collaborated on a commercially and critically successful fashion line, one that bore both their names on the labels. Samples were shunted back and forth across the Atlantic to be treated and tailored, collaged and hemmed by the different teams. For its catwalk debut models marched through Ruby artworks of hanging vampire teeth crafted from print evocative of the American flag. After that show, Ruby told American fashion magazine W: “Everybody was standing up, cheering. At that moment I thought, ‘F**k being an artist — this is wonderful.’”

He still feels the same way. On Thursday evening in Florence, Ruby launched his fashion label with a fashion show. When we spoke in late May, Ruby and his team were working on the soundtrack; they had started to think about the casting, and outfits had been assembled into looks. “I love the fact that all of these things can be mixed together,” says Ruby. It can be such an impactful five to 10 to 15 minutes of bodies and space and form and flow and speed and sound of rhythm.”

Ruby’s label is named S.R. STUDIO. LA. CA. — perhaps owing a debt to Calvin Klein 205W39NYC, the label designed by Simons until December last year, and with whom Ruby collaborated on installations for the show space, and the brand’s now-shuttered Madison Avenue boutique. But this brand is Ruby’s own creation. He describes it as autobiographical, and in a sense its clothes chart Ruby’s own life — his youth in rural Pennsylvania, with crafty patchwork and references to Amish and Mennonite dress, through to his time in California, where Ruby has lived since 2003, via denim workwear splattered with signature Ruby drips and drabs. Throughout, there is an interest in the idea of what America means, the same interest that informs his art.

In practical terms, the brand comprises four separate lines, rising up from an egalitarian main line through to unique pieces handcrafted by Ruby himself. “I envision this becoming our atelier’s bastard version of haute couture,” Ruby laughs. They will doubtless carry a hefty price tag: the line with Simons included a hand-painted parka that sold for $30,500. Compared with a Ruby canvas, it is a steal; placed next to a Barbour, not so much.

The main line is what most people will buy. “I always wanted to figure out a way to make quantities of things at a relatively inexpensive price point,” says Ruby. “It’s not the price point of a drawing, not the price point of a painting, not the price point of a sculpture or ceramic.” The in-between Ruby lines mimic the art world: one piece is labelled ED. 50, where only 50 of each will be produced, like a lithograph; another, called SOTO (named after the street where Ruby’s studio is located), is created from textiles hand-created in that space — a four-acre compound with 122,000 sq ft of interior space — and will have the yardage produced noted on labels, to give an idea of scarcity. Production for the lines is based in Los Angeles, but also Italy, Japan and Hong Kong, and pieces have been made available through online retailer ssense.com and on srstudio.com. The clothes themselves are some of the most interesting and exciting I have seen in a long time.

Ruby’s accent is soft, a little Californian, his appearance leaning towards the surfer. We first met two years ago when he was working with Simons. He looks younger than his age, and he doesn’t look like an artist. He worked in construction before pursuing an art degree. But before all of that, Ruby had a sewing machine.

Ruby was born when his Dutch mother and American father were stationed on a US Air Force base in Germany. They moved to the US when he was a child, first to Baltimore, then to Pennsylvania, where his hippyish, self-sufficient parents emulated The Good Life in a community that saw them as dangerous outsiders, son included.

His mother gave him the sewing machine when he was 13. Ruby used it to create his own clothes and mark himself out even more so as unusual. “I quickly came to the realisation that many people in the area were suspicious and hostile to anything that didn’t look or act like them,” he says. “For me, as a teenager, that was both provocative and powerful.”

Part of Ruby’s journey through art has been embracing and acknowledging his past, something about which he now admits a degree of embarrassment. “I knew quilt-making before I knew Ellsworth Kelly,” he says. Around a decade ago he began creating clothes again. “I’d set aside a certain amount of yardage from a project, to make a very simple outfit for myself,” he says. These “cannibalised” art offcuts became an unofficial uniform for Ruby. “For the past six years I’ve really mostly worn what I made,” he says, softly. He even had special branded zips and labels made. These wearable works, though not conceived as art, were nevertheless displayed at Sprüth Magers gallery in London in 2016. For Ruby, this latest fashion label has been a natural extension of his working practice, his interest, his life.

Art and fashion have been enjoying a fruitful crossover of late. But, generally, the enthusiasm comes from fashion towards art, as if using the medium as a way to legitimise the endeavours of designers and, maybe, distract from the sordid topic of coin. Ruby’s enthusiasm for fashion is near unique.

“When I did the collection with Raf, the people who I worked with, the galleries, and some of the collectors, they were so against it,” he recalls. “They were like, ‘Don’t do this. Please don’t do this.’ And I did it.” Ruby laughs — he laughs a lot, in a very unpretentious, unartsy way. “They were really upset by it. But, over the years, I started to understand that there was a younger generation that was not bothered by it. Music, film, art, fashion — all of those things were levelled for them, and I really appreciated that. They were so at ease with being fluid between both the genre and industries and cultures that they didn’t even think there was a difference. I like that.”

Ruby is interested in the idea of the creative director. To some degree, his work, which he describes as sincere, emerged 12 years ago as a repudiation of the slick production values and philosophy of artists such as Jeff Koons. “Most of the art that was made at the time was ironic, or it was kind of cynical, or it was theoretical,” says Ruby of the work that manages to be both deep and shallow at the same time — and is generally created by an army of others. Ruby has assistants, of course — like the welder. “I can weld a bit,” he allows, “but I’m not very good at it. I might make a sculpture and we put it out in the world and it falls on somebody.” Nonetheless, he likes to work on pieces himself, and their tactility and imprecision are very much evidence of the artist’s hand at work.

Ruby’s art is complex and simple, big and bold. His fashion is an extension of that. “I don’t ever want to give up the autonomy that I have as an artist,” he asserts. “Having run the studio now for the past 20 years, I know there are certain things that I don’t want anybody else’s hands on. Sometimes I go through phases where I just want to work by myself. That being said, I do like working with a team — and fashion started to seem like a better way to do that, to work with a lot of different people, work towards producing something, and then being able to put it out into the world.”

Ruby has previously referenced the Bauhaus in relation to his practice — both in its crossing of mediums and its lack of hierarchy — and it rings true. “For me, it doesn’t matter whether I make a sculpture out of that fabric, or a pair of pants, or a big flag, or a theatre backdrop, or a jacket,” he says. How modern. How new. 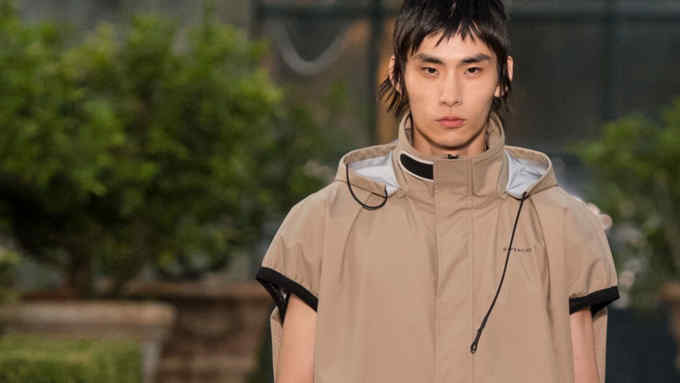