Train guards working for the troubled South Western Railway franchise have announced five days of strikes as their dispute with the train operator shows no sign of ending.

The industrial action, which began last November, will take place for 72 hours from 00.01am on Friday and on September 8 and 15.

The RMT union, which represents 500 guards on the line, is in conflict with SWR’s owners, FirstGroup and Hong Kong-based MTR Corporation, over the future role of guards.

The RMT claims that SWR, which took over the franchise last August, wants to run trains without guards. The union has said that having no guard would compromise accessibility for disabled people and the safety of the public. It denied that the 11 days of strikes so far were about preserving its members’ jobs.

Referring to a likely 3.2 per cent rise in 2019 fares, Mr Cash said: “We don’t think the paymasters of South Western Railway . . . should be exploiting the rail network for profit while they’re compromising safety and access.”

Jane Lee, a spokesperson for SWR, said the franchise hoped to run two-thirds of services on Friday and half at the weekend. Ms Lee said the RMT had rejected a framework for talks and that SWR did not intend to remove guards, only to ensure that its new fleet of trains could run without them if none were available. “We have guaranteed to continue to roster a guard on all our trains,” she said. “We know our passengers value having a second person on the train.”

The RMT has been staging industrial action on several lines because of disputes over guards; its strikes on Southern rail are now in their third year. Its members recently agreed a deal protecting guards on Greater Anglia.

The Department for Transport said: “This pointless action by the RMT is not about jobs or safety. The independent rail regulator has ruled that driver-controlled trains, which have been used in this country for 30 years, are safe. Staff have also had jobs and pay guaranteed for the length of the franchise which runs until 2024.” 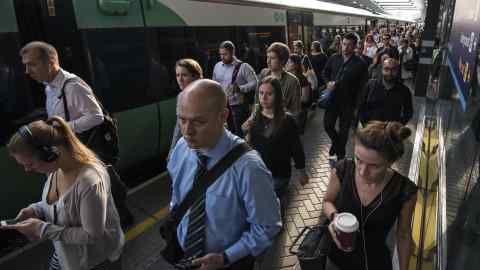 FirstGroup has been renegotiating its SWR franchise, as first reported in The Times, because of a delay to its revised December 2018 timetable. This has meant that the franchise’s revenues will not grow as envisaged, so FirstGroup may find it harder to meet its premium, the contractual payment due to the DfT.

The FTSE 250 company reported a poor set of annual results in May, losing £327m before tax in the year to March 31 2018, down from a profit of £153m last year. Chief executive Tim O’Toole resigned after the announcement.

As well as South Western, FirstGroup also runs Great Western Railway and TransPennine Express franchises. TPE has fallen below ambitious expectations and the company has forecast a loss of up to £106m for the rest of the contract until 2023.

FirstGroup is bidding for the West Coast rail franchise, which will include the High Speed 2 line.

Get alerts on FirstGroup PLC when a new story is published