Six years ago, the late Richard Lugar, then the most senior Republican on the US Senate foreign relations committee, argued that because of Argentina’s “outlaw behaviour”, it did not deserve to be part of the G20. It had nationalised assets of the Spanish oil company Repsol, manipulated inflation statistics and refused to submit to an International Monetary Fund review.

How times have changed. Indeed, after the centre-right President Mauricio Macri came to power in December 2015, putting an end to 12 years of populist rule, Argentina’s bid to assume the temporary presidency of the G20 this year was received with open arms.

The reformist leader’s efforts to put an end to more than a decade of isolationism that followed Argentina’s 2001 financial crash were greeted with enthusiasm by the international community. He promised a new era of “intelligent reinsertion” into the world, based on dialogue with all countries and seeking new export markets.

Radically and rapidly, Argentina sought to recast its image abroad as a responsible global stakeholder. Mr Macri became the star attraction at the World Economic Forum in Davos in January 2016, and soon after won international acclaim for settling a long-running legal dispute with “holdout” investors that had kept the country locked out of global credit markets since 2001.

Much has also changed since the early days of Mr Macri’s presidency. Since then, a wave of populist and protectionist leaders have rocked international relations — none more so than Donald Trump in the US.

“Argentina tried to be a player in the pro-globalisation agenda, but [the government’s] diagnosis clashed with the reality that globalisation as we know it was being seriously questioned around the world,” says Juan Gabriel Tokatlian, an international relations specialist at Di Tella university in Buenos Aires.

While the Macri government’s “ideological DNA” is rooted in “deregulation, privatisation, transnationalism, free trade, [and] free capital flows”, it has faced “an international dynamic that went against it very quickly”, he says.

“In many ways Macri was born at the wrong time,” says Benjamin Gedan, director of the Argentina Project at the Wilson Center in Washington, DC, and previously at the state department. It was Mr Gedan who organised former president Barack Obama’s trip to Argentina in 2016, which was seen as a foreign policy triumph for Mr Macri at the time.

“Macri’s pro-trade government emerges in Argentina at a moment of protectionism in Washington,” he says. “That’s the very unfortunate and disappointing reality for Argentina,” Mr Gedan adds, noting that the Macri government’s dilemma is compounded by the rest of the major economies “moving in the other direction”.

Even so, Jorge Faurie, Argentina’s foreign minister, mounts a spirited defence of the country’s strategy.

“Globalisation is a reality. In a global world it is very difficult to close yourself off,” says Mr Faurie, arguing that while protectionism may be on the rise, “it’s about how you react”. In the past three years, he adds, Argentina has opened up 160 new markets.

“Argentina has already tried [protectionism] and it went terribly. Poverty increased,” Mr Faurie says. Still, the fruits of trade liberalisation will be slow to appear. “It’s a fundamental change, but it doesn’t happen overnight.” 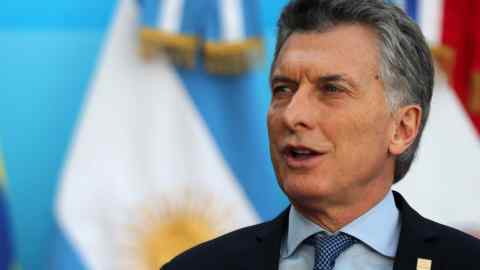 While the world has changed since Mr Macri came to power, so has Argentina. The initial optimism that greeted the reformist leader has all but evaporated since a currency crisis in late April, triggered in part by rising US interest rates. That forced Argentina to seek a $56bn rescue loan from the IMF as foreign investors were no longer so willing to lend to the erstwhile emerging market darling.

Buenos Aires had hoped the G20 summit meeting would be a kind of “debutante moment” for Argentina, when it would be “showcasing the fruits of its economic opening”, says Mr Gedan.

“This would be the moment to persuade anyone who still associated Argentina with the dark days of the Kirchner administrations that a pro-trade stance had produced a different business climate and generated strong growth and investment. Of course, none of that has come to pass. Now Argentina is more associated with emergency bailouts,” he says.

Indeed, the “rain of investments” from abroad predicted by some officials never arrived, trade relations have scarcely improved, and the economy is expected to contract about 2.5 per cent this year after the currency lost half of its value in that time, leading to a worrying surge in inflation.

This has sparked criticism that Argentina has little to show for opening to the world except a pile of new debt now worth about 80 per cent of gross domestic product, while a standby agreement with the IMF greatly limits its freedom to shape fiscal and monetary policy.

“Did we re-enter the world, or just the IMF?” asks Jorge Argüello, a former Argentine ambassador in Washington, DC, who says the expectations of Argentina’s international reinsertion have not materialised.

In many ways, Macri was born at the wrong time

Nevertheless, Adalberto Rodríguez Giavarini, a former foreign minister and president of the Argentine Council for International Relations, a private non-profit institution, says the speed and scale of the IMF loan was a direct positive result of Mr Macri’s foreign policy.

“It is notable that Macri implemented a foreign policy from the very beginning that allows Argentina to find a way out of the economic crisis,” he says. “Without the return to the world, the help of the IMF would have been impossible. It is very rarely that you can evaluate foreign policy in numerical terms.”

Video: Argentina: a life of boom and bust

Undoubtedly, the IMF loan is a political achievement that shows clear interest among western powers, in particular the US, that Mr Macri reaches the end of his mandate and that there is continuity in economic policy.

Political support from international leaders of the G20 countries may have been useful for Argentina in securing a loan from the IMF. But hosting the G20 meetings is unlikely to sway the foreign investors who have so far remained reluctant to invest in Argentina’s real economy — which is what Mr Macri so desperately needs.

“For the country itself the G20 doesn’t mean more trade or investment,” says Mr Tokatlian, who admits the G20 could still provide a symbolic dividend for Mr Macri’s voters. “Not for the G20 is the financial world suddenly going to say: ‘Wow, now I really am going to invest in Argentina.’”

READ MOREG20: Argentina and the World
G20: US and China tensions dictate against multilateralism 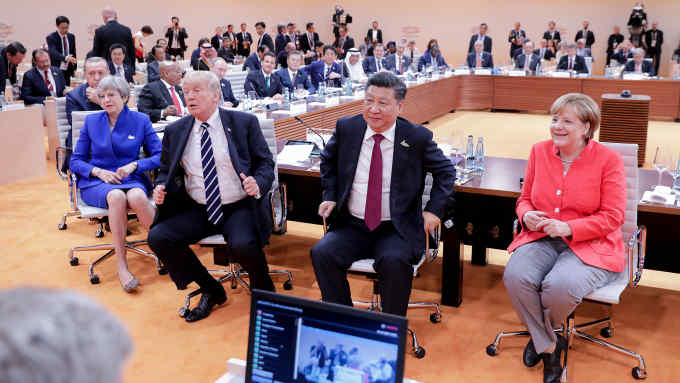