Bulgaria strives to become tech capital of the Balkans

Darin Madzharov, studying for a PhD in computer science in Belgium, was growing impatient with his sister’s calls on Skype seeking help with her Sofia high school science course. So he responded with a stream of video tutorials, which her classmates and friends snapped up.

“They became so popular that I gave up my PhD, came back to Sofia and launched an educational website,” the 28-year-old says.

His site, Ucha (“learn” in Bulgarian) took off thanks to €30,000 in funding from Launchub, a local accelerator backed by the European Investment Fund (EIF) and the EU’s Jeremie tech start-up programme. Two Bulgarian angel investors came up with €200,000 in a further raising and this year Ucha.se is set to make a profit.

“For 70 lev (€35), the price of a meal, you can sign up for a year’s worth of lessons covering any national curriculum subject,” says Mr Madzharov.

Bulgaria is striving to catch up with central Europe, where economies based on low-cost manufacturing and exports are shifting to innovative and creative industries. A generation of westernised engineers and programmers with a global outlook now underpins the country’s emergence as the technology capital of the Balkans.

Computer science and engineering graduates are no longer migrating in droves to the US and Germany. Local companies employ about 40,000 software engineers while the IT sector contributes more than 3 per cent of the country’s output, compared with less than 1 per cent four years ago.

“Bulgaria is an interesting hub for IT development with higher-quality [people] and lower costs than elsewhere in Europe,” says Asparuh Koev, chief executive of Transmetrics, an award-winning start-up that uses big data and predictive analytics to improve efficiency in the transport industry.

Sofia and Plovdiv, Bulgaria’s second city, have become flourishing outsourcing centres, providing jobs for thousands of IT graduates. Some of these go on to develop products that attract the attention of technology watchers and foreign venture capitalists.

Innovation is what sets Bulgarian outsourcing companies apart, according to Dimitar Mantchev, managing director of Programista, a software developer based in Sofia and Plovdiv. “You make customised software and build a client base, then one of your teams develops a new product and you grow much faster.”

Bulgarian IT skills were born under communism. Its state-owned electronics companies specialised in computer hardware and basic programming for the Soviet bloc countries. “It’s a strength that we’ve already had two generations of engineers with a strong R&D background,” says Daniel Tomov, founder of Eleven, an accelerator fund backed by the EIF and the Jeremie programme.

Until this year, a lack of venture capital had left fast-growing start-ups short of funding. But the situation has now improved because investors are willing to commit more cash, says Lyuben Belov, co-founder of Launchub, which has backed more than 40 start-ups using EU funds.

Mr Belov is setting up Launchub Ventures, a €20m fund with private backers, to provide up to €1.5m of funding for later-stage companies. “We have all the ingredients of a successful ecosystem — mentors, recycled capital, angel investors and investment funds. And there are about 30 companies that are doing really well with 30-50 employees and revenues above €2m.”

Let's Launch in...
Sofia, Bulgaria: shaking off its dour reputation 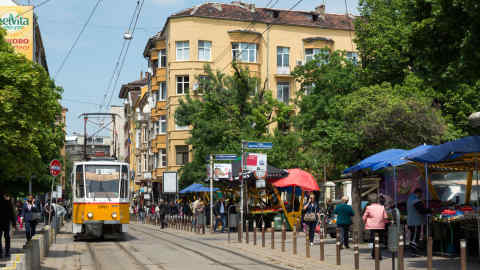 Neveq Capital Partners, which has pioneered investments in Bulgarian IT companies, has launched a fund supported by the EIF to invest between €300,000 and €3m in local start-ups targeting the global market. Its portfolio has more than a dozen businesses, among them Vayant, a leader in airfare search technology backed by Lufthansa.

“Funding is still going to be a challenge for later-stage companies but international venture capital funds are showing more interest,” says Pavel Ezekiev, a partner at Neveq.

Yet some entrepreneurs worry that a looming skills shortage risks undermining Bulgaria’s regional IT hub hopes.

“Universities don’t have the resources to teach cutting-edge skills so we’re going to face a situation where demand outstrips supply,” says Roddy Dervishev, founder of Sibiz, which designs high-performance microchips. A 13-year veteran of Silicon Valley who came back home, Mr Dervishev is one of several leading entrepreneurs committed to sponsoring IT facilities at Bulgarian universities.

Some industry watchers insist the only way for Bulgaria to sustain growth is to source IT skills from outside the EU, from neighbouring Serbia and Macedonia and even Russia and Ukraine.

The country is also attracting businesses to move here. Last year Vlad Ellis moved his company, Speedflow Communications, which provides customised billing software and voice-over-internet-protocol services for international telecoms operators, from Ukraine to Bulgaria. Half his 50-strong workforce moved with him.

Now based in Plovdiv, Mr Ellis says: “The costs are a bit higher but there are talented people here and you don’t have political risk.”