My personal style signifier is clothing by British designer Nigel Cabourn, whom I first came across 15 years ago. Now I buy nearly all my clothes from him. It’s workwear, really, often in Japanese fabrics or tweed. I like Harris tweed because it’s made with natural materials, in natural colours. I don’t wear any accessories or jewellery. It’s simplicity I like.

My floral style is influenced by the brutality and fragility of nature, and this comes from my childhood in the Baie du Mont-Saint-Michel in Normandy. It’s very rural there so I grew up surrounded by nature, which awakened me to its beauty and mystery. thierryboutemy.com

My favourite commission was creating the flowers for Sofia Coppola’s film Marie Antoinette. It allowed me to get out of the everyday existence of running a flower shop and fully express my creativity in a work of art. I also love working with an events producer called Guendalina Litta at beautiful locations in Italy.

The best gift I’ve given recently is jewellery by London designer Ruth Tomlinson to my wife, Hiromi. I’ve given her several pieces – all with an organic feel, crafted in recycled gold. The most recent one was a ring set with rough black diamonds.

And the best gift I’ve received is a 19th-century Japanese lantern from a client, the Belgian art dealer Gisèle Croës. It’s made of bronze and decorated with delicate maple leaves that cast beautiful shadows around my living room.

Recently, I have relied on walking – more often than usual – in the forest next to where I live in Brussels. This is where I feel most in balance and in harmony with my origins. I often get in my car and head to the Hautes Fagnes, a nature reserve an hour and a half away. There’s never anyone there.

In my fridge you’ll always find water and kefir. I don’t drink alcohol. I don’t generally like to keep food there. Cheese, vegetables, fruit – they lose a lot of taste if you keep them in the fridge. It’s like flowers. I never put them in cold rooms, because they lose their secret. The fridge is like a box of lies. I keep food in a cupboard.

The best souvenir I’ve brought home is a sculpture by a contemporary artist called Klara Kristalova, who lives in Norrtalje, Sweden. This piece has the body of a woman with the head of an animal – a creature between a wolf and a boar. Kristalova uses forms that are close to nature, but her use of animals is fantastical.

The best film I’ve seen in the past year is called Lazzaro felice (“Happy as Lazzaro”), by the Italian film-maker Alice Rohrwacher. It has become an obsession. What struck me was the mélange of fiction and reality; it’s magical realism. It’s a film about kindness. And ferociousness. I was also touched by her film The Wonders. She really moves me.

The last meal that truly impressed me was at Bruno Verjus’s restaurant, Table, in Paris. He works simply, with produce that is extremely fresh. I left with a feeling of happiness without remembering exactly what I ate. I also love Olivier Roellinger’s restaurant Le Coquillage – now run by his son Hugo – at the Maisons de Bricourt resort in the Baie du Mont-Saint-Michel. I have been going there for more than 20 years. Hugo has total respect for the area and its fishermen.

A recent “find” is the Blue Mountain School in London. I love what this concept space sells and shows. It’s elegant without being snobbish. I saw an exhibition there by ceramic artists Steve Harrison and Tyler Hays, who make teacups and teapots – functional objects that speak of the people who made them.

The work of art that changed everything for me was one of James Turrell’s Skyspaces, which I first saw 25 years ago. I was struck by the way it considers the sky as an artwork, and the importance of light. It was the first time a work of art made me ask, “Where am I, what is my role in life?” Without saying anything, it released so many feelings and thoughts. There’s also a dancer and choreographer called Ohad Naharin whose work is a great source of inspiration and power for me. I’ve seen all his productions for the Batsheva Dance Company over the past 20 years.

My style icon is Alessandro Michele [the creative director of Gucci]. I’m not particularly interested in fashion but I like him as a person. I like his universe – the subversion, the audacity, and how he mixes genres. I also admire the eccentric style of writer and artist Edward Gorey. He was crazy, as was his house in Massachusetts.

The best book I’ve read in the past year is Embers, a novel by Hungarian writer Sándor Márai. It takes you to another time – it was first published in 1942 and is set in the early 20th century. I loved its vivid descriptions of nature and interior scenes. It brought me so much pleasure reading it that I stopped before I got to the end – I wanted to keep it alive. I also like Truman Capote’s first novel, Other Voices, Other Rooms. It’s the story of a young boy growing up; he is very solitary and quite feminine. It reminded me of myself when I was young.

I have a collection of Native American kachina dolls. They’re wooden carvings of spiritual beings. I like their connection with agriculture and the environment. I’ve been buying them for around 15 years and now have 30 or so, sourced from three dealers – Laurent Dodier and Julien Flak in Paris and Brant Mackley in Santa Fe.

The last item of clothing I added to my wardrobe was a jacket and a shirt by Sono, the fashion label created by my friends Stephanie Oberg and Simon Homes. I like their spirit and their style, and the clothes are made in Europe in a sustainable way. Provenance is important to me, just as it is with flowers. I’m not an ecological militant, but in the past 26 years since I’ve had my shop, I always pay attention to what I buy and how things are produced. It’s a complicated issue. Sometimes, for example, it’s better to buy flowers from Africa where they are being grown naturally than from a European country where they are using a lot of energy to grow them in the winter.

The one artist whose work I would collect if I could is Paloma Varga Weisz, whose work caught my eye recently at Barbara Gladstone gallery in Brussels. I fell in love with her sculptures in wood. One that I particularly like is called Bumped Body. I find it intriguing because we don’t know what it really represents or what it means, but it feels iconic to me.

The last music I bought is the album Wave by Canadian singer-songwriter Patrick Watson. I love his voice and the way he sings. He was quite incredible when I saw him in concert. It also doesn’t take too much energy to listen to his music. Connan Mockasin is another favourite – for his madness and his great knowledge of music.

The podcast I’m listening to is France Culture’s La Compagnie des oeuvres, which is about writers, filmmakers, architects, artists, singers – looking at the life and ideas of each person in depth. The last one that really surprised me was about Frank Lloyd Wright. Everyone knows his work, but it focused on his relationship with nature, which was something I’d not heard much about.

The last thing I bought and loved was a wooden sculpture of the Archangel Michael that I picked up in Greece. It’s about 80cm high, very naive, very primitive. For me, it’s a magical object with real power.

An indulgence I would never forgo is gardening. It’s quite odd because I don’t really like the cultivated aspect of gardens, but I do love planting things and watching them grow. I have an obsession with ferns. They’re wild. I like that.

My favourite room in my house is the living room. It has big windows and lets in lots of light, and I like that it’s among the trees. I also have a lot of treasured objects in here: a painting by Romanian art duo and twin brothers Gert and Uwe Tobias, and another by Belgian artist Sanam Khatibi. There’s a framed Swedish textile, some Japanese vases and ceramic statuettes by British artist Claire Partington.

My favourite website is Thisispaper – an online magazine about architecture and design. But I don’t look at the internet a lot, it tires me. I’m rather old-school. I still have a lot of DVDs. 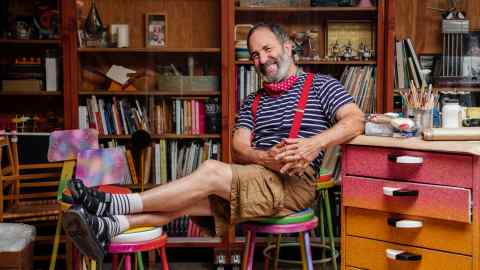