Media and marketing start-ups proliferate across platforms, making it harder for some to get their message heard

We’ll send you a myFT Daily Digest email rounding up the latest Media news every morning.

Traditional media and advertising companies have recast their business models for a digital age in which a borderless internet is spawning upstart rivals as well as opportunities.

“The social media platforms are just middlemen,” says Jamie Bolding, founder and chief executive of UK-based social media marketing specialist Jungle Creations. Content on Instagram, YouTube or WeChat is created and uploaded not by these platforms but by users and by a new generation of media and advertising companies.

Jungle Creations, which tops the media category of the FT’s 2020 ranking of Europe’s fastest-growing companies, is one such example. With a 2015-18 compound annual growth rate (CAGR) of 242 per cent, it is 25th on the overall list.

The company began in 2014 as a Facebook page where Mr Bolding shared viral articles and videos “for friends to enjoy”. It now produces social media-friendly content on topics such as food, home improvement and gaming, and has 116m followers across the Facebook, Snapchat and TikTok platforms. 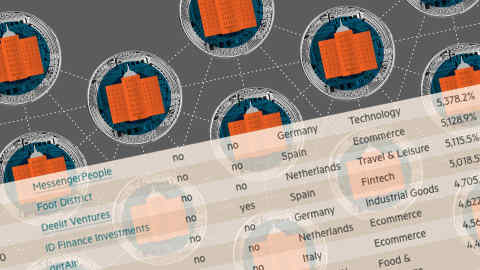 “We make money through ad breaks and by sharing revenues with the platforms,” Mr Bolding says. Jungle Creations also produces videos for its advertising clients, which include Disney, Diageo and the UK’s National Lottery.

Thomas Singlehurst, media analyst at Citi, says it has “never been more important” for media and advertising companies to have a direct relationship with audiences.

Industry incumbents, such as WPP, one of the world’s largest advertising groups, or British broadcaster ITV, have struggled to adapt as a growing share of people’s attention turns to the internet and smartphones.

The shift has brought about an explosion of start-ups that are trying to connect the world of advertising with new technology and platforms.

“Historically, your ability to offer a service to a brand was linked to your ability to phone up a company like ITV and negotiate a slot in their air time,” Mr Singlehurst says. “Marketing companies today do not have to be part of a group with private access,” he adds, noting how almost anyone can now broadcast and advertise over the internet.

This, he says, means that strategic investments in media and advertising happen less often and with greater caution.

“Investors are in general sceptical about traditional players in media and advertising because of the perceived structural risks, so they are asking a lot of questions before pulling the trigger,” he adds.

Nevertheless media and advertising combined account for roughly one in 20 of the companies in the ranking, with Italy (16), France (11) and the UK (8) the leading hosts by number. Italy dominates in advertising while France leads in media.

Italy’s position can be attributed in part to changes taking place in the retail sector, says Erika Pagin, general manager at Velvet Media, a digital marketing company based in northern Italy. It is 176 on the list, with clients including Burger King and Spanish group NH Hotels.

Ms Pagin says Italian companies trying to “survive the retail apocalypse” have learnt to establish a direct relationship with consumers through content, adding that this move to digital has created a way in for “smaller and more nimble marketing companies”.

Matthias Riedl, co-founder and chief executive of Berlin-based DCMN, an advertising company ranked 453 on the list, says the business owes much of its success to the diversity of the city, in spite of other criticisms. “The secret ingredient is the people you hire,” he says, adding that he has had to compete for tech skills with other industries and regions when hiring, in central and eastern Europe in particular.

“The [central and eastern European] region’s increasing wealth, combined with a large talent pool for developers and tech-focused roles, has led to soaring investment,” he says.

Yet investors face a challenge in picking winners this year — not least because the coronavirus pandemic could hit European stocks in media and advertising by more than 40 per cent, according to Citi.

In recent years, digital media trailblazers such as BuzzFeed, Vice and Vox, attracted high valuations before they had figured out how to translate large audiences into revenue. Disney, which in 2015 invested $400m in Vice, last year said it doubted that it would see a return on its investment.

“Venture capitalists come with terms that favour them, and all these companies that raised all this money with fantastic headlines actually locked themselves into a dark future,” Jungle’s Mr Bolding says. “I didn’t raise money until 2018, after we had grown organically to 120 people and had over £10m in revenues.”

Sarah Simon, an analyst at Berenberg Bank, says many media companies are struggling. “Look at the share prices,” she says. “Not every listed company is declining, some are looking to rejuvenate their business, but it is a very tough environment.”

Investors backing small start-ups should be careful of companies too dependent on the algorithms of Google and Facebook, she adds. The two platforms will win 55 per cent of global digital ad spend this year, according to eMarketer, a research company.

Despite market challenges, DCMN, which turns 10 this year, has lofty plans for the next decade. Its co-founders’ goal is for “everyone on the planet” to be using a product or service belonging to one of their clients, which they plan to achieve by working with companies that have a “truly global reach”, says Mr Riedl.