Each spring in the sleepy city of Taif, which rests on fertile mountains in the western part of Saudi Arabia, members of the Kamal family return from nearby towns to help run a small factory that produces perfumes from local roses.

These efforts form part of the annual Taif rose festival, which is organised by the local government and attracts thousands of tourists, including pilgrims who stop at the factory shop to buy gifts.

“This year is better than previous ones,” says Bader al-Kamal, a member of the family that has run the factory for eight generations. “We have many more pilgrims and tourists than usual,” he adds, surveying a storage room full of bright pink petals.

As crown prince Mohammed bin Salman moves to diversify the Saudi economy away from its dependence on oil revenues, companies from home and abroad are jostling for opportunities in newly unlocked sectors such as tourism and leisure. They will be central to attracting foreign investment and creating jobs for the kingdom’s young population.

While the country received 18m visitors last year, the majority of them came for the Muslim pilgrimages of hajj and umrah. The Saudi commission for tourism and national heritage said last month that it had submitted work on new rules for tourist visas to the government for approval.

Prince Sultan bin Salman, president of the commission and half-brother of the crown prince, says he expects approval to be granted soon.

“I wish I can tell you tomorrow but we are waiting for higher authorities to give us the green light,” he adds. “We are more eager than anybody else because for people it’s a new economy and tourists will definitely put [money] into the economy.”

Beyond tourism, other sectors are witnessing a flurry of activity as authorities push ahead with a social liberalisation agenda deemed essential to the success of the reforms.

Since shortly after the government announced in September that it would lift the ban on women driving, auto manufacturers and distributors have been courting female drivers through advertisements and marketing campaigns, even though the issuing of licenses will not start until June.

Yet they might struggle to reach female customers because many of the auto companies, as well as their advertising agencies, do not have Saudi women on their staff, says Ghassan al-Khaldi, a strategic planner at Dubai-based BPG Bates, a communications agency.

“The challenge I see to [auto] brands and agencies is a challenge that all other brands face. I look at their ads and I think: whoever did this ad doesn’t know Saudi Arabia.” They really do not “get it” adds Mr Khaldi, who has experience of working on campaigns in the region for companies such as Ford and Volkswagen.

The entertainment industry has piqued the interest of both local and international investors keen to take advantage of the loosening of restrictions on recreational activities.

In March, the kingdom approved licensing regulations for cinemas, which opened the door for AMC Entertainment, the Chinese-owned group, to launch the first commercial cinema on Saudi soil in April, ending a ban that had lasted more than three decades.

AMC signed the agreement with Saudi Arabia’s sovereign wealth fund earlier this year and announced the deal during the crown prince’s visit to Los Angeles, where he met executives from Walt Disney and other Hollywood studios.

Dalian Wanda-controlled AMC plans to open up to 40 cinemas in 15 cities in the kingdom over the next five years. It aims to have between 50 and 100 cinemas in operation in 25 cities by 2030.

Other companies are similarly poised to take advantage of a rare opportunity for growth at a time when consumers elsewhere are moving to online platforms like Netflix to watch movies.

These include Vue International of the UK, which has signed a deal with Riyadh-based Abdulmohsen al-Hokair Group to open 30 cinemas in the kingdom within three years. In the same time span, Imax of Canada, plans to open up to 20 theaters in Saudi Arabia.

A Saudi official says the cinema market is expected to reach 80bn riyals ($21.3bn) over the next 10 years.

“It is going to be like the gold rush that took place in San Francisco,” says Abdulaziz al-Muzaini, co-founder of local animation studio Myrkott. Eager not to be left on the sidelines, his company recently signed a distribution deal with Dubai-based Vox Cinemas.

The latter runs 29 cinema complexes and 294 screens across the Middle East and north Africa, and plans to invest $533m in 600 cinema screens in Saudi Arabia between now and 2023.

The government anticipates that more than 350 cinemas with over 2,500 screens will be open by 2030. Saudi household spending on culture and entertainment is expected to rise from 2.9 per cent of income to 6 per cent by that year.

Mr Muzaini said he is optimistic about the growth outlook in the entertainment sector, even if reasons to be cautious remain. “There are unknowns,” he says. “The Saudi market has many variables that makes you somehow uncertain.” Among them are concerns about censorship and fear of a backlash by conservative elements of a traditional society, which may feel alienated as the government continues its push to dilute the influence of clerics.

“Entertainment in Saudi Arabia is more than just fun and games,” Kristin Smith Diwan, a senior resident scholar at the Arab Gulf States Institute in Washington, wrote in March. “It is a tool for opening the economy and courting a key demographic, depriving the once allied religious movements and religious establishment of their hold over the public.”

About half of Saudi Arabia’s population is estimated to be aged under 25 and officials insist that society is ready for change.

Prince Sultan downplays fears of a backlash as the kingdom prepares to open up for foreign investment and tourists. Every citizen has a right “to express themselves”, he says. “We’ve always been a country that is destined to be open and to continually develop,” he adds. “We cannot afford[to] nor we can stop moving forward and developing.” 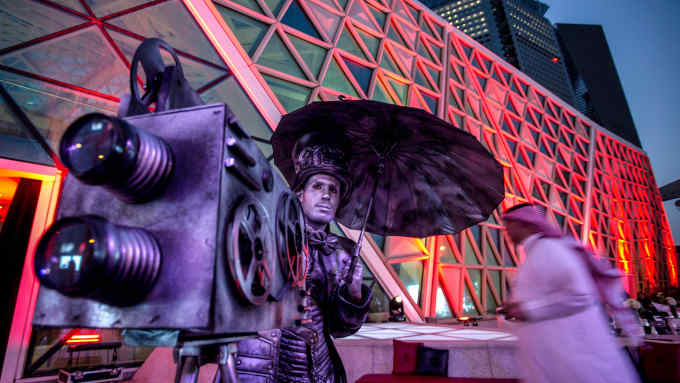