Marshall Wace, one of the world’s biggest hedge fund managers, is planning to open an office in Singapore, the latest firm to establish a base in the city-state while doubts grow over the future of rival financial centre Hong Kong.

The firm, which was founded in 1997 by Paul Marshall and Ian Wace, already has an office in Hong Kong and two years ago it established a presence in Shanghai. The Singapore expansion is to target asset raising and attracting new portfolio managers, the person said. The chief executive of the new Singapore office is listed as Timothy Luke Quah Lai Hock, who previously worked at Marshall Wace in Hong Kong.

In June, the Financial Times reported that some hedge funds in Hong Kong were exploring uprooting their operations, fearing they could fall foul of Beijing’s initiative to target “interference” from foreign countries.

Gideon Rachman
Why Hong Kong cannot be another Singapore 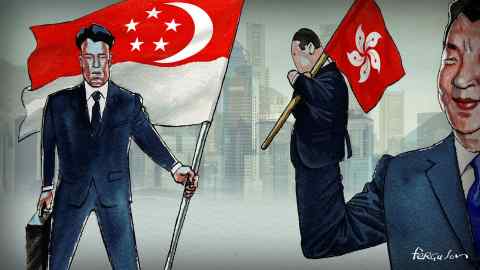 Earlier this month nearly 300 people were arrested in Hong Kong as crowds protested against the new security law and the government’s decision to postpone Legislative Council elections.

Against this backdrop, Singapore has embarked on a push to become the region’s top financial hub. As part of this, earlier this year the city state launched a new corporate structure designed to attract the assets of fund managers and family offices.

The move into Singapore comes after a period of strong growth for Marshall Wace, one of the few main UK hedge fund success stories in a sector feeling the pressure from better-performing US rivals, the impact of coronavirus and Brexit.

The firm’s computer-driven Market Neutral Tops fund, which analyses buy and sell recommendations from around 1,000 external analysts at banks and research houses to determine its bets, has gained 11.7 per cent this year, according to investors.

Its Tops China fund is up 36.2 per cent, while its Eureka fund, which is run by chief investment officer Mr Marshall, is up 4.6 per cent. The firm was recently revealed as having taken a record bet against Lloyds Banking Group.