Hongkongers turn to Brexit Britain as a haven

The market for newly built luxury homes in London has been in the doldrums for almost five years, battered by oversupply, tax changes and worries over Brexit.

Now, though, it has received a boost from a territory whose political troubles have eclipsed even the UK’s: Hong Kong. Residents of the semi-autonomous Chinese city have been buying up London homes, while in the commercial property sector purchasers are eyeing big deals, according to analysts and estate agents. The turmoil in the former UK colony stemming from anti-government protests has revived longstanding links with London and made Brexit appear comparatively unthreatening, propelling a fresh wave of buyers westwards.

“We are seeing masses of [Hongkongers] again,” says Steven Herd, chief executive of MyLondonHome, an estate agent. “What is going on in Hong Kong is driving people to look for a safe haven. It is partly about wealthy families making sure they have property elsewhere that is suitable for them to move into at short notice, and partly about them wishing to get their funds out of a volatile region.”

The number of Hong Kong buyers in London has increased in the past three to four months, many of them seeking homes in the £1m-£2.5m price range, says Herd. The weakness of sterling and falling luxury property prices have added to London’s allure, he says. “Undoubtedly they have helped to underpin the market and stop it sliding.”

Hongkongers tend to prefer new properties. Molior, a company that monitors property developments in London, says 5,156 new homes in the capital were sold in the third quarter of 2019, the highest figure in a year and a half. About a fifth of these went to overseas purchasers, many of whom were from Hong Kong and China. “It is [homes] at the [upmarket] £1,000-£1,200 per square foot level, which haven’t sold well for several years,” says Tim Craine, a director at Molior.

He adds that, despite worries about Brexit, the trend taps into London’s reputation as a haven for wealth from unstable parts of the world. “It is the flight to safety,” he says. “A decade ago it was buyers from around the Mediterranean as the Arab Spring took place, then maybe four to five years ago it was Saudi Arabia. The tide has come in at this particular time because of the trouble in Hong Kong.” By way of illustration, about one in 10 homes sold so far in a new housing scheme by developer Ballymore in Brentford, west London, has gone to a Hong Kong buyer, the company says.

Buyers from Hong Kong are able to defy a broad drop in outbound capital from mainland China, partly because the mainland’s tighter capital controls do not apply in the territory. But more political certainty in the UK would cement the trend, agents say.

There are uncertainties in the US or China and difficulties in the UK, but it is more stable

The “flailing” of sterling “is definitely a contributing factor”, says one British national who grew up in Hong Kong and is considering a purchase in the UK. “I have been considering it for about a year now, but I have put a hold on the process as I think prices will continue to drop [in the UK]. I just have a total lack of confidence in how the government is handling Brexit, so I feel like I have time,” she says.

Estate agents note that for Hongkongers, London is not purely an investment destination but also a place to live, full or part-time. The city has a thriving community from the territory, including the children of wealthy and middle-class Asians at London’s highly rated schools and universities.

Caspar Harvard-Walls, a London-based buying agent with Black Brick, has been meeting prospective clients in Asia. “Some potential [Hong Kong Chinese] clients have raised concerns about their children becoming caught up in the protests and see the appeal of sending them overseas for their secondary or higher education. They are looking for accompanying accommodation,” he says.

Harvard-Walls uses the discount on prime London houses compared with the market peak in 2014 in his pitch — that is, a 34.4 per cent reduction in Hong Kong dollar terms from five years ago, thanks to the depreciation of sterling and the fall in house prices from that peak.

The inflow of capital has been less pronounced in commercial property, where London transaction levels have been dwindling because of Brexit worries — not least because sellers fear exposing properties to an uncertain market. A run of big purchases by Hong Kong and Chinese buyers two years ago — including landmark skyscrapers in London’s financial district such as the Leadenhall Building (the “Cheesegrater”) and 20 Fenchurch Street (the “Walkie Talkie”) — has been followed by a quieter market.

In August, however, CK Asset Holdings — the company founded by Li Ka-shing, Hong Kong’s richest man — bought UK pubs and brewery group Greene King in a £4.6bn deal. The brewer’s £3.5bn freehold property portfolio was most likely one of the attractions. This followed a failed bid in 2018 for a portfolio of railway-arch properties ultimately sold for £1.5bn. CK Asset is now run by Li’s son Victor Li, but its activities are still followed closely by other Hong Kong investors, says one Chinese lawyer operating in London. “Where Li Ka-shing moves, others follow,” he says.

New entrants from Hong Kong are arriving in the UK commercial property market. In September, a first-time Hong Kong buyer, a client of investment company Goldstone Commercial, bought the Forum St Paul’s office building in the City of London for £80m.

“[Investors] see Brexit as possibly reaching its endgame, and it is all outweighed by the fact that the rioting [in Hong Kong] is pretty horrendous,” says Nick Braybrook, a partner at estate agent Knight Frank in London who advised the buyer. He says people in the UK “don’t register how emotive it is — it’s splitting companies in half, families in half”.

In another City of London deal, Cheung & Sons, a Hong Kong-based property developer, in June bought the freehold of 28-30 Cornhill, a 1930s-built office building near the Bank of England, for £32m. “Buying property in London is quite attractive at this moment,” says Ronald Sin, a senior associate at Cheung & Sons. “Many wealthy people from Hong Kong or in Asia are looking at the market in London. In China or the US, there are many uncertainties. There are also difficulties in the UK, but it is more stable,” he says.

Investors see Brexit as reaching its endgame, outweighed by the rioting in Hong Kong

Interest in London’s office sector is strong, says Antonio Wu, deputy managing director at estate agent Colliers International in Hong Kong. He says for investors, offices will be the “most interesting sector by far”, adding that “occupancy is still very strong and very healthy”.

Many of the big Hong Kong property groups are also looking at other types of investments in the UK, according to a London-based property lawyer. “There is strong interest, but not this time as a pure real estate play,” he says. At the same time, investors are looking at technology, fashion, leisure and green energy, he adds, but are “nervous” about the possible election of a Labour government led by the leftwing Jeremy Corbyn. “Let’s face it, these investors are some of the most neoliberal people in the world,” he says. 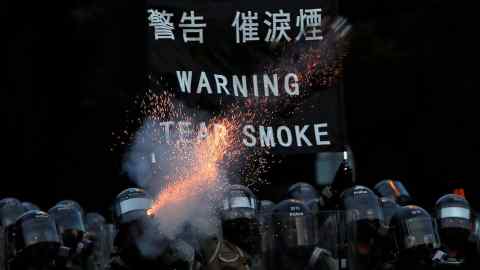 Elsewhere in the world, Hong Kong homebuyers have strong links with Vancouver, New York and Sydney, while commercial buyers have been increasingly active in Singapore and the US, according to data from Cushman & Wakefield, a property services company.

Savills’ residential division notes a steep rise in enquiries from Hongkongers — from 1,045 in the whole of 2018 to 1,620 so far this year — in most cases, about UK homes. But not all have resulted in purchases. Mark Elliott, head of international residential at Savills in Hong Kong, says many enquiries have come from “people who watch the news at night, get a little bit scared and pick up the phone, but you don’t hear from them again”.

Simon Smith, senior director of research at Savills in Hong Kong, says a more stable UK political environment would attract yet more investment from the territory. He says many Hong Kong investors have “accumulated a war chest”, ready to deploy should there be “a form of Brexit that is acceptable, and that might provide a lift to the real estate market”.

Get alerts on UK property when a new story is published