How Paula Rego is exploring new paths at 84

Solo presentations are rare in the main Galleries section of Art Basel, where the eclectic artworks displayed in most booths betray the need to sell, sell, sell. This year, however, London’s Marlborough Gallery has permitted Paula Rego to play solitaire.

Various factors motivate the gamble. Right now, the Portugal-born, London-based artist, who was born in 1935, is in vogue. Having finished a monograph at the L’Orangerie in Paris earlier this year, her solo show at MK Gallery in Milton Keynes opens this weekend. A solo exhibition is also planned for Tate Britain in 2021.

Equally pertinent is Marlborough’s custody of two sculptures by Rego that have never been shown before. Entitled “Gluttony” (2019) and “Pride” (2019), the works mark a turning point in the artist’s practice as she decides to make three-dimensional objects not merely as props for her paintings — as she has done for years — but as expressions in their own right. There is also a third sculpture for sale, “Prince Pig” (2006-19), although this has featured in various pictures. The sculptures are priced from £200,000 to £300,000.

Rego is known for her sinister lexicon, which often draws on dark folk tales and stars ruthless female agents devoid of fear or meekness. Nevertheless, even those familiar with her scary, imaginary kingdom may find this new departure gives them the shivers.

Like a silent warning to the Botox-smooth, selfie-snapping tribe who prowl Art Basel’s halls, “Pride” sprawls on her vintage chair like a cross between Miss Haversham and Marie Antoinette. Made from papier-mâché and mixed-media, with her grey tresses piled up in a rococo beehive, adorned in cheap baubles, ruffled gown faded beyond redemption, she stares vacantly into the distance as if blind to the sickly crew of dolls and animals scattered about her.

As you might expect from an artist tormented by bad dreams since, she says, she had a vision of death in childhood, “Gluttony” is also the stuff of nightmares. An obese woman, her flabby frame crammed into a tasteless coral jumper and long black skirt — Rego sources clothes carefully, using the internet and shops in London and abroad — she holds a spoon in which lies an amputated hand. Meanwhile dolls in various stages of dismemberment lie on her lap and at her feet.

As if defying us to be disgusted, these sculptures crackle with grotesque charisma, yoking them into the vision of a painter whose command of line and composition has allowed her to bestow even the most satanic narratives with a surreal grace.

Here at Art Basel, as well the sculptures, there is also a clutch of paintings by Rego which include her monumental canvas, “The Fitting” (1989) and the painting “Olga” (2003), an image of a man in a dress with a young girl kneeling at his feet with her head between his legs. That the latter evokes not outrage but curiosity speaks volumes for Rego’s sensibility for mood, colour and light. It’s exciting that she is exploring new paths in her ninth decade. Given that she plans to fashion all seven sins, there should be a few more shivers in store. 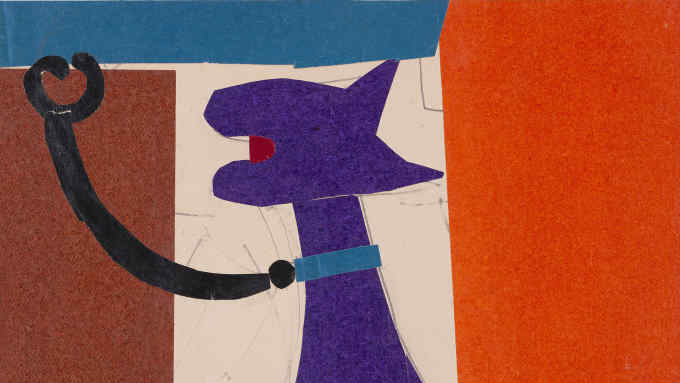