The new smart-casual dresscodes for men

Suiting or sportswear? The post WFH wardrobe is all about the mix

“When I think about high-low style, I always come back to the phrase ‘duality of man’,” says podcaster Lawrence Schlossman, on the phone from Brooklyn. “‘High-low’ can sound like a pejorative, but really, we’re talking about mixing the fly-est designer stuff with sportswear, vintage finds and those foundational basics that don’t need to cost a ton of money.”

Schlossman and his co-host, James Harris, are the self-professed “menswear bros” behind cult New York-based style podcast Throwing Fits. They’re known for their bombastic presenting style, somewhat frenetic conversations with fashion personalities, and inclination for mixing high-end luxury with sportswear and vintage. “New York is always about the mix,” says Harris. “You can be on the train with a millionaire entrepreneur, next to a construction worker, next to a rapper or just a dude who plays a harmonica on the street.” Schlossman adds: “There are so many different kinds of people here who care about their personal style. They don’t just want to look like another statistic in a suit.”

The concept of mixing luxe tailoring with contemporary sportswear has been simmering away over the past few years, but has really come to a head for AW21. It’s been spearheaded by independent NYC brands that draw heavily on aesthetics associated with hip-hop and skate culture: at Noah, double-breasted suits with pleated trousers are mixed with sweaters, beanies and white socks; while Aimé Leon Dore collaborates with Brooklyn-based bespoke tailor Martin Greenfield (who created the tailoring for HBO’s hit series Boardwalk Empire) on its formalwear, and will style statement overcoats or double-breasted blazers with sweaters and track pants.

Further afield, brands such as Hermès are mixing wide-legged tailored trousers with track tops and parkas, Louis Vuitton combines punchy, strong-shouldered overcoats with drapey shirts and bottoms, while Alexander McQueen plays with a hybrid jacket, the top half cut in suiting cloth and the bottom half in stonewash denim, paired with matching jeans. This smart/casual look is perhaps no more evident than at Wales Bonner, whose collection for AW21 includes Victorian-style tailored greatcoats with sheepskin collars sitting over ’90s-looking triple-striped sports hoodies and track pants, as well as “Savile Row-esque” dinner jackets styled with louche pyjamas or baggy chinos.

It’s easy to see why this look has taken off: high-low style relaxes suiting and sharpens up sportswear, making the former less stuffy and the latter a little dressier. As an exercise in contrast, and artfully mixing different garments, it feels particularly relevant following the rollercoaster ride of the past 18 or so months. What’s more, it’s a way to revisit the tailored pieces in your wardrobe without feeling overdressed.

“I felt a need to express how the wants and desires of our customers have changed,” explains Ermenegildo Zegna’s artistic director Alessandro Sartori of his AW21 collection, which experiments with the idea of a low-key, louche wardrobe for men to embrace this “next normal”. Tailored pieces are deconstructed with slouchy silhouettes, jersey knitwear replaces formal shirting and oversized blazers are treated as outerwear. “Now men need fluid silhouettes and multifunctional yet comfortable outfits,” Sartori adds. “Clothes need to blend an indoor and outdoor sensibility to reflect the way we’re living and working. This season was all about re-tailoring the modern man, and finding a way to blend comfort and style into a new aesthetic.”

What does a suit look like that’s as comfortable as a sweatsuit, but that speaks to the elegance of having a suit on?”

This is a sentiment shared by Jerry Lorenzo, the founder of high-powered streetwear brand Fear Of God, which collaborated with Zegna this time last year. The collection was, as Sartori puts it, a “cross-pollination” of Zegna’s tailoring heritage and Fear Of God’s contemporary sportswear. While an unexpected tie-up, the collection was met with acclaim and shifted Lorenzo’s attitude to tailoring, which Fear Of God had never offered before. Now, suiting and tailored outerwear are a core part of Lorenzo’s Seventh Collection, layered over jersey sportswear and varsity-style sweaters. “In a way, the collection not only shows a young man how to mature but gives the older guy freedom to approach his wardrobe in a different way,” says Lorenzo. “It’s all about answering the questions: who is the modern man, and what does a suit look like that’s as comfortable as a sweatsuit, but that speaks to the elegance of having a suit on?” Fear Of God’s California blazer is the answer, constructed with a voluminous fit, low button-stance and dropped peaked lapels. “It has a very balanced and lightweight feel, refining the classic sport coat,” explains Lorenzo. “I try to create designs that speak to American luxury and my Californian roots. Working with Zegna allowed me to learn tailoring at the highest level, and gave me the confidence to propose this category within our mainline collection.”

In Paris, a long-time advocate for high-low style is Gauthier Borsarello, the creative director of menswear label Fursac, editor-in-chief of style magazine L’Etiquette and co-founder of Le Vif, a vintage store and showroom. Borsarello’s own approach to style values eclecticism above all else. “To me, high-low style is all about quality,” he says. “Nothing poorly made should be in the mix. You can wear a bespoke suit with a Swatch watch, or a pair of crocodile loafers with ’90s Levi’s. The provenance of your clothes shouldn’t matter as long as they are made with quality.” It goes without saying, given his work with Le Vif, that mixing contemporary fashion with vintage matters to Borsarello too: “It’s just about mixing well-made clothes, they can be from yesterday or today, it doesn’t matter so long as you’re choosing wisely.”

Damien Paul, MatchesFashion’s head of menswear, says the high-low trend is here to stay. “We’ve seen a huge uplift in pieces that speak to craftsmanship, with tactile fabrications in bright colours and prints,” says Paul, “but our customer is interspersing these with casual comfort designs. He enjoys experimenting with separates from the likes of Bottega Veneta or Lemaire, paired with sporty, high-performance pieces such as tech sneakers from Salomon.” 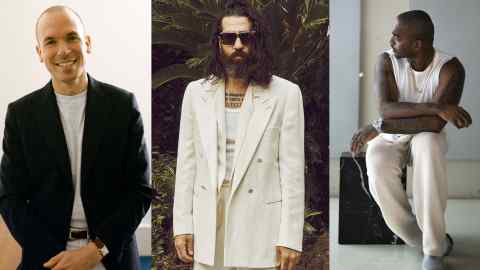 Back in New York, another high-low aficionado is Jack Carlson, the founder of Rowing Blazers, a brand whose identity is built on mixing preppy casualwear with college-style tailoring. To him, mastering the high-low look is easier said than done. “Mixing tailoring and sportswear takes some taste to do it well,” he says. “You’re mixing formal and casual, modern and vintage, and you’re bringing things together from different contexts in unexpected ways to reflect who you are. This trend isn’t about being a cookie-cutter from any one brand’s lookbook, and it’s not about wearing things because someone told you they’re cool.”

“High-low is all about finding your own personal sweet spot on the spectrum, with tailoring on one end and sportswear on the other,” Schlossman concludes. “In terms of wearing it well, I just want to see something that inspires me – someone who’s put a tailored piece and something casual together in a way that makes me step back or re-contextualise something. This look is all about unlocking the swag.”