The football captain on why he set himself a different goal

Vincent Kompany has won plenty of accolades in his football career but the Manchester City captain believes his latest achievement is among his greatest: an MBA. Kompany, 31, studied part-time for five years at Alliance Manchester Business School. He received his Global MBA in 2017 and has no doubt it has improved him as a businessman and as a person.

“I started like someone going to war with just his bare fist,” Kompany says, raising it to emphasise how unprepared he was. He realised early on that he was “out of his depth” when the topic was corporate finance. “I had to research the name of the course before I could even start,” he says, smiling. “It’s daunting when you have to look up the title of the book before you can open it.” But with the dedication of a professional athlete and help from his tutors he set about “learning how to learn”.

Grasping technical language was part of the battle. “It’s terminology really. If you talk to a top accountant about his field of expertise, it’s mind-boggling. I got a lot out of it.”

Kompany is a central defender and stands almost 1m 93cm tall. It can be an ugly position to play but his strength along with pace is his calmness, the way he reads a situation to intervene before it gets desperate.

His relaxed appearance playing in front of 50,000 fans and millions on TV is no illusion, he says. “You know that you’re really good at something and you know that you’ve practised it all of your life, so you feel comfortable.

“Actually doing something in front of a very small audience, but it’s out of your comfort zone . . . I find the second one a lot more challenging than the first.” That is what the MBA forced him to do.

“That [process of] evolving is something that I will keep for myself for the rest of my life,” he says.

He began playing at the Anderlecht academy in Brussels at the age of six, so football comes easily — but study was hard. Did he ever think of giving up? “Yes, many times.”

Rather than City’s Etihad Stadium, where he has played since 2008, he picks the John Rylands Library for our interview. The University of Manchester-owned Gothic revival building, with a reading room reminiscent of a church nave, opened in 1900. Such environments inspired him to work — and put up with teammates’ jokes when he opted for a book rather than a film on flights to games.

“It was banter constantly and you knew whenever you opened a book you got hammered a little bit,” he recalls. But it was brief and good-natured, he says. 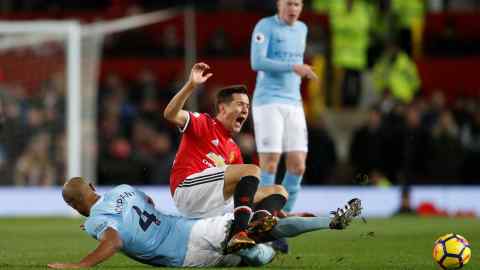 Kompany lights up when he sees the old books on the Rylands’ shelves. He is focused as he talks, with an occasional smile when talking about his family or home city.

The footballer was born in Uccle in Brussels in 1986. His father is an activist from Zaire, now the Democratic Republic of Congo, who had fled from the dictator Mobutu. His late mother was a Belgian trade union official. At their insistence, he ignored offers from some of Europe’s biggest clubs and stayed with his home town team Anderlecht to complete his final school exams.

After an injury, some of those offers were withdrawn and he was bought by Hamburg, in Germany’s first division, in 2006. Two years later he joined Manchester City, just before its takeover by Sheikh Mansour of Abu Dhabi’s ruling family. A club that had not won the league since 1968 has since become one of the richest in Europe.

He is the only regular left from 2008 and has survived four managers, several injuries and won two championships, two League Cups and an FA Cup. City is on course to win the league again this year and make a serious assault on the Uefa Champions League. He also captains Belgium.

Kompany says the MBA and his family — he is married and has three young children — kept him going throughout the injury lay-offs. “It allowed me to take away a lot of the pressure . . . from my day-to-day job, which is football.”

His next mission is to learn Spanish, the language of coach Pep Guardiola. Challenging himself is “something that’s vital to me. I need it in my life.”

He had talked to business schools in Belgium and Germany and France but they could not offer the flexibility to fit the course around that all-consuming day job.

I find football much more powerful than what grown-ups want it to be. It’s a community

Manchester’s Global Part-time MBA is based on self-study with lectures and seminars grouped into blocks to allow busy executives and footballers to carve out time to do it. Kompany says lecturers ensured he did not fail because he had to miss a deadline or seminar for a match. He was also given longer than the normal two years to complete the course. “There was a general approach that made you feel like they wanted you to succeed. It was tough . . . but there was enough to say OK, you’re making progress, we’re seeing that you’re coming to terms with the material and just helping at the right moment,” he says.

“Everyone in Manchester in general has a positive mindset,” he says and that was true of the university, too.

Xavier Duran, interim head of MBA programmes at Alliance Manchester, says that while students without an undergraduate degree have taken the course, it was a big step up. “We tend to take people from all sorts of different backgrounds and every single walk of life.”

The amount of turnover from communication agency Bonka Circus, which Mr Kompany invested in

The fact that Kompany had already demonstrated leadership skills on and off the pitch was in his favour. The course uses the “Manchester method”, which aims to apply learning to practical situations. This involves a lot of “do-it-yourself”, Kompany explains.

An MBA will help him develop his business career once he finishes playing football. Kompany says he has experienced success and has learnt from his failures, in particular through a chain of sports bars in Belgium. Inexperience and enthusiasm led him to sink money into the bars. Revenues did not meet targets and he had failed to take into account overheads such as leases, stock and staff costs. He lost about £2m. The two bars he opened shut after a year. He learnt a lot about responsibility, “having to unwind it all whilst remaining a good human being. You don’t want to lay off anyone [or] have an impact on other businesses that would bankrupt them or cause problems for families”.

The MBA will help him present a proper business plan and account for the unexpected next time, he says. His Bonka Circus, a communication and advertising agency in Belgium, has gone better. Kompany invested in Bonka Circus in 2011 when it became a profitmaking company rather than a social enterprise. Turnover is more than €5m. “I’m proud of it because it started with absolutely nothing which is, I think, the right way to start a story,” he says.

His advice is to find the right people and reward them with stakes in the business rather than big wages early on.

“The success of Bonka Circus is 100 per cent down to the people. You find the right people, you motivate them and you kind of nudge them in the right direction after that or at some stage if they do really well you almost ride on the wave of success.”

Business people are often eager to learn from sport and Kompany says there are parallels. Captaincy is like middle management, he says. “You’re a captain but you don’t really have any power over anyone. It’s a very challenging way of being a leader because you have no tools to exploit.” He learnt how to deal with different players. Some responded to a telling-off, others to an arm around the shoulder.

2013 Buys third division Belgian club and renames it BX Brussels, to provide opportunities in a deprived part of the city

2014 Sets up Good Kompany sports bars in Belgium. They close a year later. Ambassador for SOS Children’s Villages, a charity helping children who cannot live with their families

Kompany’s final dissertation could also help businesses, he says. He examined the link between home form and the atmosphere in a stadium. He asked top players around Europe at which grounds they performed well as home players and which intimidated them as away players. The same venues came up time and again for a good atmosphere, including Dortmund, home to Europe’s tallest football terrace, and Celtic Park in Glasgow. He says these clubs had cheaper tickets and a close relationship with their city and the fans. Few were in the Premier League, he notes. Business could learn how to create a “fortress” in their institution that rallies people to a “common purpose”.

Kompany will stay in the game after retirement. He has worked in it for 25 years and says leaving would be like qualifying as a doctor and giving up medicine in your 30s.

“I’d rather give up most of my wealth to have the guarantee that I can carry on working for the rest of my life.”

He already owns, with his sister, a community club in Brussels used to help children in deprived neighbourhoods stay out of trouble and break down racial barriers. “I find football much more powerful than what grown-ups want it to be. It’s a community to me, it’s something very meaningful in the life of many, many people and especially the youth. And, therefore, I think it can bring social cohesion,” he says.

The African refugee’s child, who came to live his dream in Europe through football, seems to be trying to preserve something of that idealistic spirit.

Meanwhile, Kompany is able to joke that he is one of few people to do an MBA who are likely to earn less afterwards. He reportedly receives a basic salary of more than £6m a year. But a long retirement would be his “worst nightmare”. “I’d rather give up most of my wealth to have the guarantee that I can carry on working for the rest of my life.”