Uncertainty is the byword for investors dealing with the fallout from last year’s political surprises. When considering how long the ageing bull market will last, US savers must make predictions about the stability of the EU and the plans of President Donald Trump’s administration.

It is therefore as important as ever for investors to have a steady source of advice upon which to rely. Against this backdrop we present the 2017 edition of the Financial Times 400 Top Financial Advisers, which provides a snapshot of the very best professionals at traditional US broker-dealers.

Just like their clients, the advisers in the FT 400 are having to deal with uncertainty. They are waiting to see if the US Department of Labor delays implementing its so-called “fiduciary rule” agreed under the Obama administration, which would require retirement plan advisers to put their clients’ interests before their own. The rule is due to take effect in April, but the Trump administration is trying to block it. Yet many brokerages and advisers have already revamped parts of their businesses to comply with the rule. 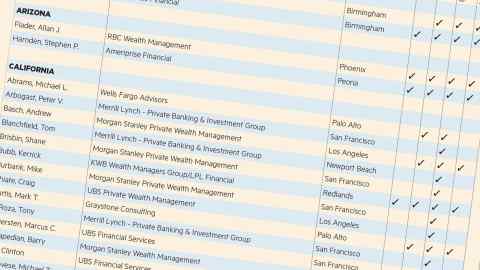 Even if the regulation is repealed, the investing industry has been shifting to lower costs and less risk to serve clients’ interests. For instance, when we asked this year’s FT 400 advisers for the top reasons to choose an investment fund, 38 per cent cited low cost, up from 28 per cent last year.

This is leading more advisers to use passive funds, which carry lower expenses because they merely track indices rather than making active decisions. Passive investments account for 26 per cent of the assets the FT 400 advise on that are held in mutual funds and exchange traded funds, up from 20 per cent last year.

In recognition of advisers’ commitment to their professional development, they were awarded bonus points for having earned top industry certifications. More than half (57 per cent) of the FT 400 advisers have at least one credential, and 22 per cent have two or more.

Experience counts, especially when uncertainty is greater than usual. The average FT 400 adviser has been in the business for 27 years — compared with 26 in last year’s list — and 90 per cent have been advisers for more than 16 years, meaning they have managed money through at least two bear markets.

The average FT 400 adviser managed $1.7bn in assets as of September 30 — 14 per cent higher than the year before. Listed advisers come from 20 different broker-dealers, with the biggest Wall Street companies best represented: 19 per cent of the advisers are at Morgan Stanley and 18 per cent at Merrill Lynch.

Financial Advice
Methodology behind the FT 400 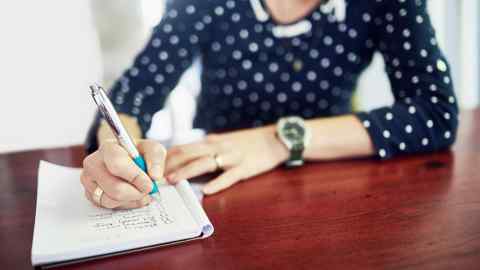 Many high-quality advisers just missed the list this year — sometimes the difference between those who made it and those who did not was a few more years of experience or a slightly higher rate of growth.

The FT 400 is listed by state and, as usual, the larger states with higher concentrations of wealth have more advisers. This year’s advisers came from 38 states plus Washington DC. New York has the highest concentration of advisers, accounting for 14 per cent, and California is close behind with 13 per cent. Texas and Florida are the next most-represented states.

Advisers find it consistently difficult to meet their clients’ demands individually, as 40 per cent of the FT 400 cited this as a top challenge for the second year in a row. So it is understandable that so many advisers work in teams, which allow for specialists to handle different aspects of planning, investing and customer support. Ninety per cent of this year’s advisers work in teams, similar to the 89 per cent last year. The teams are growing, with the average FT 400 comprising 6.7 professionals dealing with clients, up from 6.3 in 2016.

Every Monday, keep up to date with the big stories that matter to IFAs and their clients, picked from the FT, FTfm and FTAdviser.

Top advisers are able to prioritise client service because they focus on the wealthiest investors: 85 per cent of this year’s FT 400 have some clients with $1m-$10m in investable assets and 91 per cent serve some investors with more than $10m. Investment advice at this level has traditionally involved personal discussions in hushed, wood-panelled offices.

Nowadays, investors will increasingly find more technology used in their customer support. Three-quarters of FT 400 advisers provide online, interactive tools for their clients and 37 per cent of the advisers have held client meetings via Skype or similar videoconferencing services. This is a matter of efficiency, as even the top advisers must keep up with the so-called “robo advisers” that offer low-cost automated investment accounts.

Will clients come to miss the old-fashioned, low-tech approach? That is yet another uncertainty with which investors and advisers must grapple.