I’ve always been fascinated by the work of outsiders and maybe that’s because as a working-class creative from Glasgow arriving at Central Saint Martins, I felt like an outsider too,” says fashion designer and artist Christopher Kane. “With outsider art – I prefer Jean Dubuffet’s term ‘art brut’ – there’s a purity and honesty. You see the raw intention and the works vibrate within.”

Kane is chatting in a light-filled gallery space, the world-renowned Galerie Gugging, which is tucked up in the forested hills of Lower Austria outside Vienna. He has been invited by the gallery’s director Nina Katschnig to show his own figurative paintings alongside pieces from resident artists from the House of Artists, a permanent home and studio for 14 creatives with psychiatric conditions.

The show, Curated by Christopher Kane, is a bold move for the designer, who found salvation in art during lockdown when the fashion industry had come to a grinding halt. “Painting and drawing have always felt so natural, and as a boy I used to ask my mother to pose for me. When you are running a fashion business your passions take a back seat, but I picked up my brushes and pens again and that practice became my sanctuary, a way of maintaining mental health,” says Kane.

Kane first struck up a friendship with Katschnig in 2016, on the discovery of a work by Johann Hauser titled Woman in a Yellow Dress. It reminded him of a dress in his spring 2011 collection called Princess Margaret on Acid and on visiting Galerie Gugging he found a kindred spirit. Their first collaboration, an exhibition of Gugging artists in Kane’s Mount Street store, was shown during Frieze London 2016. There was further cross-pollination: Kane featured vibrant motifs by Johann Korec and Heinrich Reisenbauer in his pre-fall 2017 collection. He shot the look book on site at Gugging.

“I had no idea Christopher was painting until I saw his pictures on Instagram,” says Katschnig. “I approached him about showing with the artists here. There’s an honesty about his work. He’s not painting for money or to be famous but because it must be.” Curated by Christopher Kane is the third in a special series Katschnig has masterminded, whereby creatives are invited to curate shows, selecting works by Gugging artists from an extensive on-site archive.

The exhibition is bold in its scope yet intimate in its revelations and ultimately life-affirming. Kane’s works feature large-scale semi-abstract figures, with limbs cut from lace that extend beyond the canvas edge, shimmering glitter lips and textural plays of skilful collages made from paper, paint and remnant fabric.

Art became a sanctuary, a way of maintaining my mental health

The voluptuous, confrontational silhouettes appear like visions from a fever dream: smaller heads in pop-art-bright colours ogle the viewer while figure studies in layers of glitter shimmer like bizarre phantasmagoria from a cabaret. They hang alongside the wild, pulsating work of Arnold Schmidt, who has been working at the House of Artists since 1986. By contrast, the repetitive ideograms of Heinrich Reisenbauer – smiley faces and the sun – capture the euphoria of making. “To me his work symbolises freedom, simplicity and happiness,” says Kane. His selection also encompasses erotic line drawings by Karl Vondal. All eight of the artists in the show with Kane are collected internationally and several have work on show in museums and galleries across the world.

Over the centuries, interest in outsider art and the art of those with psychiatric disorders has often gone in tandem with breakthroughs in the study of mental health. In the 19th century, French artist Théodore Géricault visited the Salpêtrière hospital in Paris (an asylum for women) for his series of Portraits of the Insane, which aided studies in the field. In the 1920s, the surrealist artists became fascinated by the workings of the subconscious, chiming with Sigmund Freud’s groundbreaking work. During the 1970s the act of creativity once again surfaced as a subject of fascination, accompanied by a groundswell of interest and appreciation of art brut.

“So much art is judged by the conventions of good and bad taste but who is to say what is good or bad?” asks Kane. “Or that it cannot be art because the artists are not formally trained. I know self-taught seamstresses, tailors, people who write bestselling novels and these are all artists, but they did it by their own accord and with gut instinct.”

Katschnig’s own introduction to Gugging was equally serendipitous. “I first came here as a student of psychiatry when writing a thesis on art and schizophrenia. I interviewed the [founder of Galerie Gugging] Johann Feilacher, and asked for a job on the spot,” she smiles. “That was 25 years ago.” Back then the House of Artists was a residential psychiatric clinic housing 20 men of all ages, some of whom took to painting through therapy sessions. Feilacher’s vision (he is also a collected sculptor) was to establish an artist’s retreat and to build a museum dedicated to art brut. “It’s not that art makes people healthy or offers a cure – what they express is their inner world,” explains Katschnig, who has been director of the gallery since 2000, “but it elevates the individuals, heightens esteem and attracts attention and support from the outside.” The entire Gugging complex, including the museum, gallery, House of Artists and accompanying atelier, took time, labour and sweat to realise, and was eventually completed in 2006.

“There was scepticism initially regarding the gallery’s commercial operation but soon everyone could see that the intentions were good and understood how funds from sales of work would go to the artists, pay for living costs and help fund the work at Gugging,” says Katschnig. Today, as society works to lift the stigma attached to mental health, there is a new wave of study and interest. It is fitting that Gugging, near Vienna, the birthplace of modern psychiatry, is at the leading edge of successfully combining community, commerce and entrepreneurship. So impressive is the venture that Feilacher is now invited as an adviser on government boards on culture and health issues.

Kane is one of several creatives who have been invited to Gugging over the decades. David Bowie visited in 1994. Now, collectors, academics and art world figures drop in by appointment, while the artists are represented internationally at fairs and in exhibitions. 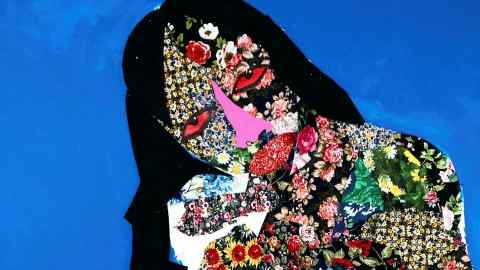 Kane is remarkably unprecious about his art, and his connection to Gugging and Katschnig made instinctive sense. He set about curating the show by working with a scale model of the hanging from his London studio. The process has supercharged Kane’s work for the brand he runs with his sister and creative partner, Tammy. “We are now more hands-on than ever,” he laughs.

At the show opening, the Kanes’ “pals” including actress Laura Carmichael, writer Lena Dunham (who commissioned him to design her wedding dress) and fellow designer Erdem Moralıoğlu gathered for the private view with the artists. “It is amazing to be able to shine a light on Gugging,” Kane smiles. “If people love it, great! If they don’t? Good for you!”