Coronavirus has accelerated an analogue-digital showdown that Japan had hoped could be postponed for years: the clash between selling insurance online and the country’s 230,000-strong army of seiho ladies, the nearly all-female door-to-door salesforce.

Months of closed offices in city centres have taken away one of the seiho salesforce’s most concentrated source of potential customers, say analysts. Companies are now allowing staff to use messaging and videoconferencing apps to win contracts.

New sales channels using smartphones and other online tools have also opened up. Mitsui Sumitomo Aioi Life Insurance, for example, is offering cancer insurance via multi-function copiers at 7-Eleven convenience stores across the country from this week.

Analysts say these moves could be a turning point for an industry that has been stubbornly slow to embrace digital transformation. Most sales are still done physically, with female staff making up 90 per cent of the companies’ salesforces.

Hayanari Uchino, managing director at Daiwa Research Institute, said the survival of insurance companies would depend on their willingness to shift to a digital approach. “As sales channels diversify further, it will likely be necessary for the industry to consider what the appropriate total number of salespeople should be,” he said.

Large life insurers such as Dai-ichi Life Insurance and Meiji Yasuda Life Insurance stress that no job cuts to their salesforce are planned, even as they place digital strategy at the forefront of their longer-term strategies.

Still, Mikuri Kinoshita, a 29-year-old saleswoman at Orix Insurance, is concerned about the future as customers are exposed to the convenience of buying policies online during the Covid-19 crisis.

“Once it becomes possible to do, I’m worried that there will be more customers who would opt for the internet option. If sales are completed online, it won’t be counted in the performance of salespeople,” she said.

Starting in mid-May, the company cleared Ms Kinoshita to sell policies to customers using videoconference tools. Previously, she was required to meet them in person to check their health conditions before a contract could be signed. 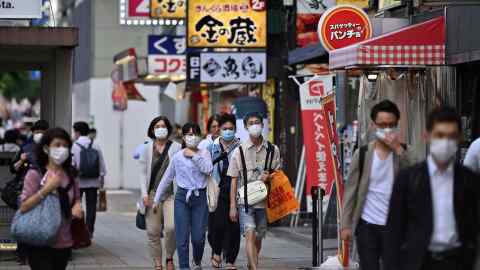 While her monthly income is not based on the number of contracts agreed, many saleswomen at other life insurers with commission-based salaries have suffered a decline in earnings as customers put off buying policies during the lockdown.

Analysts warn that job losses are inevitable. “In the longer term, the salesforce is going to shrink. Will they say it officially? Not for the time being,” said Hideyasu Ban, a financial services analyst at Jefferies.

Company officials caution that the digital transformation will not be achieved overnight.

Despite the recent diversification of sales channels, life insurers have strengthened their staffing levels, with the number of salespeople increasing 2.8 per cent during the past four years to 234,286, according to the Life Insurance Association of Japan.

The most recent data from the Japan Institute of Life Insurance show that only 3.3 per cent of life insurance products were sold via the internet between 2013 and 2018, while salespeople accounted for 54 per cent.

Nonetheless, the case for digitalisation has strengthened as online insurance companies have delivered stronger performance during the pandemic. At Lifenet Insurance, the annualised value of contracts with new customers in April rose 87 per cent from a year earlier to ¥456m ($4.2m), hitting a new record as traditional insurers cut back on face-to-face sales.