The next best table in London?

Jesus Adorno, legendary maître d’ of Le Caprice, on why he made the move to Brown’s Hotel

In his near 40-year career as the genial face of the celebrated Mayfair haunt Le Caprice, Bolivian-born Jesus Adorno seated everyone from Diana, Princess of Wales, to Mick Jagger. Last June, the iconic London restaurant shut its doors. Despite much talk of reopening, the restaurant has yet to resurface. Even when it does, Adorno won’t be there. He will, instead, be a stone’s throw away as director of hospitality at Charlie’s, in Brown’s Hotel on Albemarle Street, where I met him recently for lunch.

Adorno was first approached by Rocco Forte, who owns Brown’s, four years ago. “I wasn’t ready to move,” he says. “I had this pea-brain idea of doing 40 years at Le Caprice.” He ended up at Charlie’s because, just as when he walked into Le Caprice in 1981, he experienced a coup de foudre. “This room makes me salivate,” he says. A naturally shy but charming man, he comes alive discussing the possibilities.

For one, he wants to install more banquettes (what he calls “power tables”) to provide the comfort and discretion his customers want. Only with the right number of desirable tables, after all, can he work the miracles he managed at Le Caprice, where regulars could call up at the last minute and Adorno would move things around to accommodate everyone. At Le Caprice, it was table seven (in the corner) that everyone was after, where Lord Archer, Lord Snowdon and Diana, among others, would sit. It was also the table the then chairman of Condé Nast, Nicholas Coleridge, would take you to if he were giving you a promotion. “If you sat there,” says Adorno, “it confirmed you had status.” Good service, he tells me, is about ensuring everyone feels loved: personal touches like knowing a regular’s favourite drink or newspaper. Details matter. “There’s nothing worse after a great dinner than waiting too long for your coat,” he says. 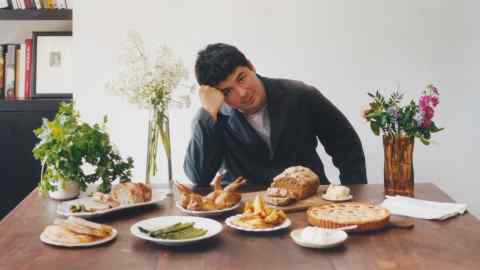 Adorno wants Charlie’s to be the Establishment lunch spot in Mayfair. With chef-director Adam Byatt (of Michelin-starred Trinity) and head chef Matt Starling (formerly of Fera at Claridge’s) in the kitchen, the menu promises accessible dishes with flourishes. My lunch comprises succulent pink Cumbrian lamb with artichokes and roasted peppers, followed by a delicious lemon tart with hibiscus syllabub. Adorno opts for a tartlet of spiced summer squash, chicken curry and strawberry sorbet. By his reckoning, the standout dish is the beef tartare (once a fixture at Le Caprice), which I have as a starter. This version is voluptuous and sublime. But it looks nothing like beef tartare (it comes topped with tiny white cubes of chestnut mushroom and creamy peaks of bone marrow emulsion) until you dig in and unearth the lovely red morsels of meat. It is both comfortingly familiar and excitingly new. As a metaphor for what lies ahead under Adorno’s helm, it couldn’t be better.