Michael Kors on the fight to save Broadway

Fashion’s ultimate showman talks about his 40-year career, his theatre obsession and his mission to keep the lights blazing on The Great White Way

When the curtain came down on Midtown’s theatres in March last year, no one anticipated New York would be without show tunes and Shakespeare for so long. For many New Yorkers, life without Broadway is no life at all.

For Michael Kors, one of fashion’s greatest showmen, the shutdown was felt especially acutely. “He has a mania for the theatre that started when he was five,” says his long‑time friend and collaborator Bette Midler. “Everything about it is an inspiration to him and feeds his work, which is all about glamour and the good life. He must have seen Hello, Dolly! about a hundred times.”

So in planning his 40th-anniversary collection earlier this year, Kors knew precisely where he would show it – under the spotlight of the Great White Way. On a fine night in late April, Kors’ favourite models from the past four decades – including Naomi Campbell, Shalom Harlow, Helena Christensen, Karen Elson and Alek Wek – walked out of his beloved pre-theatre haunt Sardi’s, down the middle of West 45th Street and into the Shubert Theatre as Rufus Wainwright bellowed out Billy Joel’s “New York State of Mind”.

As short a performance as it was, it was also a perfect Broadway moment. “This collection was all about people stepping out,” says Kors from his office a few blocks from the theatre district on 42nd Street. “It was about strutting your stuff. For too long the highlight of our days was a walk in your own neighbourhood – and that was a global experience. I wanted to capture the energy of making an entrance in a restaurant, or that feeling when you rush to the stalls just before the curtain goes up and everyone turns to see who is arriving. It was about going for drinks, then to a show, then on to The Lambs Club or Joe Allen for supper. It was the thrill of being out and about.”

While Kors’ anniversary show was moving for many fans of Broadway, it was particularly emotional for those who, during this pandemic, have been furloughed or forced out of work (according to the Broadway League, the theatre district accounts for 97,000 local jobs). Kors’ support for the community is well known throughout the industry: “His generosity to The Actors Fund and the Aids charity Broadway Cares is legendary,” says Midler. For some of the technicians involved, the Kors show was their first time since last spring to light a stage. Kors also used the opportunity to pull focus onto the plight of the industry and attract donations for The Actors Fund, a cherished safety net for everyone in film, theatre, television, music, opera, radio and dance; anyone employed in the industries can apply for financial aid. The Michael Kors company donated $100,000 to the fund, while the designer himself also gave an undisclosed personal sum.

“We need to shore up these people who are on shaky ground,” says Kors. “You come to New York with a dream, and we don’t want to lose the dreamers. Everyone who was there, who helped set up the show that night, was feeling the same, and every single one of them had at some point questioned their careers.”

Just as he supports the community, Kors has also always dressed its leading actors: in addition to Midler, there’s Blake Lively, Emily Blunt, Nicole Kidman, Kate Hudson and her mother, Goldie Hawn. Most recently, he fitted the British actor Cush Jumbo in a black sequinned gown with a plunging neckline for the Baftas. “It was the first red carpet I’d done since moving back to the UK, and I wanted to arrive in Broadway style,” says Jumbo.

Kors remains as enraptured by Broadway glamour as he was when he was five years old. “I like things that are indulgent and glamorous but casual,” he says of the inspiration for his collections, which typically combine classic Manhattan glamour with masculine asides. “My favourite thing is when a woman is out in evening clothes and it gets windy or cold, and she grabs her husband’s or boyfriend’s jacket, and there’s the swagger of wearing something too big for her. I can trace it back to childhood memories – I was always late for school and missing the bus, so my mum would throw a big coat over her nightgown and drive me there.”

And he’s full of Broadway stories: like the time he was at Sardi’s – where he likes to go for shrimp cocktail and a vodka with fellow theatre lover Anna Wintour – and nearly missed the start of a show. “Me and my husband, Lance, were going to see something that Rupert Everett was starring in, and we were already running late so were trying to eat fast. Jane Fonda walked in, and I had never seen her in person before. I’ve always been a huge fan. She has worn my clothes in the past, but I was too shy to introduce myself, so I was just staring until the waiter came over with the bill and said, ‘You haven’t touched your food and you’re going to miss the curtain! Go!’”

HTSI
The Cause: the refugee crisis, expressed in a shoebox 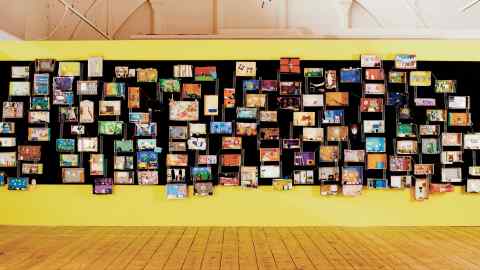 The designer’s taste in theatre is varied – the event, craft and medium more fascinating to him than the subject matter. He went back to see Bruce Springsteen perform at the St James Theatre this summer – the first full-length show to reopen since last March – and he was there when Patti LuPone stopped a performance of Gypsy because she noticed a member of the audience using their mobile phone. Like many Broadway obsessives, he’s a Sondheim superfan. He loves the 91-year-old composer for his complexity and contradictions: “He makes you feel elated and entertained, but also gets us to question our lives before we walk out. I also really like that new directors can take the balance of his work and shift it. I love to see new ways to peel an onion. I saw a small revival of Sweeney Todd downtown, and it was set up so you were in the shop, and we were all served pies and tankards of ale. I thought I’d seen every incarnation until then. It’s like a little black dress or a camel coat or a pair of jeans – you are never finished with it. There’s always a new way to do it.”

Broadway has been dark for longer than ever before in its history, and everyone in the city is looking forward to seeing it lighting up again. Kors is most excited to see LuPone in Sondheim’s Company when it reopens in December; he last saw it in London before it transferred to New York. And, of course, he’ll be staging new fashion shows of his own.

“New York is always a surprise,” says Kors of the city’s constant drama. “But the show will still go on.”