Tim Cook was left with one of the hardest acts to follow in the history of business when he succeeded Steve Jobs as Apple‘s chief executive in August 2011.

Just six weeks after Mr Cook’s appointment, Mr Jobs succumbed to pancreatic cancer, with many fearing Apple would go into decline — the vision and genius that had inspired the company’s revival dying with him.

“I know this sounds probably bizarre at this point,” Mr Cook told the Washington Post earlier this month, “but I had convinced myself that he would bounce.”

Instead, in the five years since, Mr Cook has slowly had to define his own Apple. It has become a company in some ways more open and approachable, even as its valuation surged, at one point, to new all-time highs for any company in the world.

“I think you could make the argument that Tim Cook was the perfect man for the job at the point he took over,” says Ben Wood of CCS Insight. “The company went from a small player in a massive market [of mobile phones] to a massive player. That required a very different skill set to an entrepreneurial visionary.”

Yet despite reporting the most profitable quarter ever in January last year thanks to the huge success of the iPhone 6, some critics continue to challenge whether Mr Cook can ever deliver the same kind of technological breakthroughs as his predecessor. In 2012, he was forced to apologise for the bungled debut of Apple Maps, something he now admits was “clearly a screw-up”.

In 2014, he unveiled a range of new products including the Apple Watch and Apple Pay, but the company is still more dependent on the iPhone for revenue growth and profits. As the easier growth phase of the smartphone market comes to an end, Apple has been forced to rethink the iPhone line-up to unlock new sources of growth, first with the underwhelming plastic 5C and then with the more successful SE earlier this year. In the meantime, Apple’s customer base has swelled from a couple of hundred million to perhaps more than 600m people.

“Cook gets a hard time for not being Steve Jobs, but Apple’s success is grounded in some of those mundane requirements that a lot of the companies fail at,” Mr Wood says, from manufacturing and quality control to diplomacy when dealing with governments such as the US and China. “On balance, Apple has consistently delivered really reliable products.”

1. The success of the iPhone

Soon after selling the billionth iPhone last month, Tim Cook described the smartphone category’s growth as limited only by the number of people on the planet in range of a cellular tower. 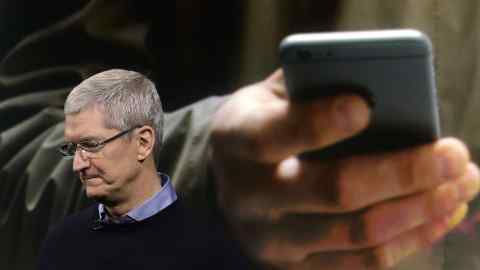 “Over time, I’m convinced every person in the world will have a smartphone,” he said in a Washington Post interview. “That may take a while, and they won’t all have iPhones. But it is the greatest market on earth from a consumer electronics point of view.”

That thesis underpins Mr Cook’s confidence that whatever the cyclical gyrations of the market, the iPhone can continue to grow for many years to come. Just getting this far is a huge logistical accomplishment, analysts say. “Scaling up hundreds of millions of units in a relatively small space of time is a remarkable achievement,” says Ben Wood of CCS Insight.

However, the iPhone’s huge success also makes it difficult for any other Apple product to stand out. “For any other consumer electronics company, the Apple Watch would be a success beyond their wildest dreams,” Mr Wood says. “Juxtaposed against the iPhone it looks like a disappointment . . . It’s not necessarily the stellar product that everyone hoped it would be.”

2. Dealing with a pile of cash

One of the first clear departures Mr Cook made from his cash-hoarding predecessor came in March 2012, when Apple announced that it would pay shareholders a dividend for the first time in 17 years, alongside a $10bn share buyback scheme. At the time, it had $121bn in cash, a figure that has since swelled to $232bn. Because 93 per cent of that cash is held offshore, Apple has taken on a total of $85bn in debt in the US and elsewhere to fund its payouts.

Cook gets a hard time for not being Steve Jobs, but Apple’s success is grounded in some of those mundane requirements that a lot of the companies fail at …Apple has consistently delivered really reliable products

During the same period, regulators have taken aim at that offshore cash pile in one form or another. In 2013, Mr Cook was forced to defend Apple’s tax practices before the US Senate, after an investigation accused the company of using legal loopholes and subsidiaries in Ireland to minimise its payments. “We don’t depend on tax gimmicks,” he told senators. But the issue has not gone away: Apple is still awaiting a final ruling from the European Commission after it accused the Irish government of giving Apple illegal tax breaks.

3. Growing the workforce and expanding beyond Infinite Loop

The number of people working at Apple, in its Cupertino campus and in its retail stores around the world, has almost doubled in the past five years. While most of its secretive research and development work is still done in and around headquarters at One Infinite Loop, it has expanded further afield under Mr Cook’s watch, including in Cambridge, England and Israel, as well as planned facilities in India and China.

While some observers have questioned Mr Cook’s ability to match his predecessor in product and design leadership, he has rallied staff behind him by taking a strong position on civil rights issues and by standing up to the US government over privacy. “Steve was the big thinker, the great communicator, and the founder,” says Ben Bajarin, analyst at Creative Strategies. “Tim is developing his own way of inspiring his troops, by caring about human rights and being green.”

However, Apple’s swelling ranks — and ever-growing supply chain — makes it increasingly difficult to keep details of forthcoming products secret. “We can do very few things without it being reported somewhere,” he told the Washington Post.

Mr Cook this Wednesday marks half a decade in the top job at Apple, at a time when many on Wall Street see little to celebrate. Apple’s market capitalisation has doubled in the past five years, overtaking ExxonMobil to become the world’s most valuable company and, for the most part, maintaining that position despite a huge surge in Alphabet’s stock price last year. 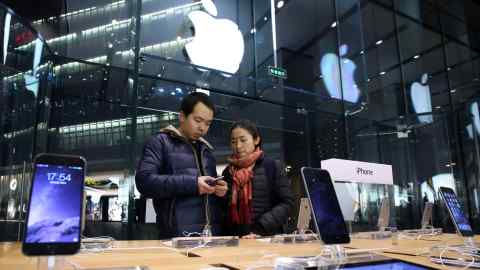 Nonetheless, Apple has come under pressure over the past 12 months as iPhone growth went into reverse for the first time.

Even though his communication with shareholders has been much more transparent and forthright than Jobs’, Mr Cook’s relationship with investors has not always been smooth. He has clashed with activists Carl Icahn and David Einhorn, who pressed for increased returns to shareholders. Yet his strategy recently won an endorsement from Warren Buffett’s Berkshire Hathaway, which increased its stake as the stock price has rallied over the past few months.

Apple analyst Horace Dediu notes the company has always earned a far lower price-to-earnings ratio than other Silicon Valley companies such as Facebook, Alphabet and Amazon. “It’s priced like a steel company going out of business,” he says.

“Apple is a global empire, much bigger [five years on] in terms of sales, headcount and customers. In some ways that means they may have lost that sharpness of innovation but at the same time this is not a bad place to be.”

Tim Bajarin of the Creative Strategies consultancy says Mr Cook does not worry too much about pleasing shareholders from one quarter to the next. “Tim’s mantra has always been, ‘If we make the best products, the stock will be fine’.”

Mr Dediu argues that Wall Street is looking at Apple all wrong. Instead of being another hits-driven consumer electronics company that could go the way of Nokia or BlackBerry, he views it as a luxury brand with recurring revenues from a growing base of loyal customers.

Mr Cook tried to convince investors of this view earlier this year when he put a spotlight on Apple’s services business. He revealed that Apple now has more than 1bn unique devices in active use — a metric closer to the “monthly active user” figure by which internet companies are often judged.

Apple customers together spend enough on apps, music and mobile payments to generate revenues approaching the size of a Fortune 100 company. Mr Dediu estimates that, including hardware and software, Apple customers spend around $1 a day. “Apple will at some point in time have a billion paying customers,” he predicts. “A billion dollars a day from a billion customers is not inconceivable.”