Lead the way with 50% off
Equality & Human Rights Commission

Sign up to myFT Daily Digest to be the first to know about Equality & Human Rights Commission news.

Hundreds of companies that failed to file gender pay gap data before this week’s deadline must be forced to comply or face tough sanctions, the parliamentary equality committee demanded on Thursday.

About 1,500 qualifying companies missed Wednesday’s midnight deadline, according to the Equality and Human Rights Commission, which is overseeing compliance with the rules.

Under rules introduced last year, UK employers with 250 or more workers are required to report the difference between what they pay men and women.

Maria Miller, the MP who chairs the Commons women and equalities committee, said making sure those companies that had not filed would comply with the law was “a real test” of the EHRC “and they need to get it right”.

She added that her committee would be asking for monthly progress reports of action taken against non-reporting organisations. “I will want to make sure that any companies that haven’t complied are taking the appropriate action and that this issue is not simply kicked into the long grass.”

The EHRC had “open, clear routes” to taking legal action, including unlimited fines, Ms Miller said. “They have to do that, and not fall into the trap of bending over backwards to work with companies who have no intention of complying with the law.”

The EHRC said: “We have a strong record of legal success and using our legal powers in the most effective way.”

Video: What you need to know about the gender pay gap

With more than 10,000 private and public sector employers hitting the deadline, the figures showed that more than three-quarters of UK companies pay men more than women, with an average pay gap of 9.7 per cent.

The private sector overall performed better than the public sector, with average median pay gaps of 8.1 per cent and 14 per cent, respectively.

On Monday, the commission will begin writing to employers who have missed the deadline and give them 28 days to do so before launching an investigation. It can obtain court orders to get companies to obey and, if that does not work, seek further court action that can ultimately lead to unlimited fines.

Chris Weaver, an employment lawyer at Payne Hicks Beach, said the EHRC’s initial approach would be to “seek to persuade rather than rush in to fine”. But he added that the reputational risk of failing to report the pay gap data was as much of an incentive. 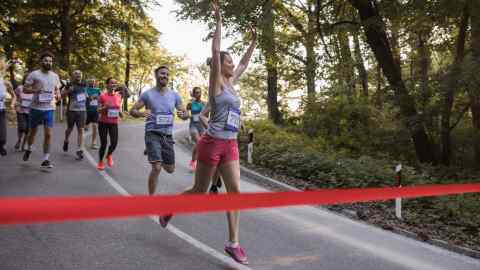 “This is a hot topic at the moment. The highest levels of government, including Theresa May, have spoken of a desire to address this issue. It is key for organisations to be seen to be complying.”

One problem facing the EHRC will be assessing exactly how many organisations have or have not reported their gender pay gap data, given that there is some confusion over the numbers.

The Government Equalities Office, which manages the portal where gender pay gap data are registered, originally estimated a total of 9,000 entities. On Thursday, however, 10,147 had done so — with both public and private sectors overshooting expected numbers.

In addition, some companies have reported data that is statistically unlikely, such as having a zero average gender pay gap measured by both the mean and median. Several companies have resubmitted their figures as a result.