Lead the way with 50% off
Brexit

Theresa May on Tuesday inflamed the Conservative civil war over Europe after she offered to work with the opposition Labour leader to end the Brexit impasse, opening the door to a softer exit deal that could include membership of an EU customs union.

After a cabinet meeting lasting more than seven hours, the UK prime minister made clear she was willing to face down Eurosceptic Tories, announcing she would seek a further delay to Britain’s exit from the EU as she tried to forge a new cross-party approach with Jeremy Corbyn on future ties with the EU.

But she added that any joint plan would have to endorse the 585-page exit treaty she has negotiated with the bloc.

Mrs May said she hoped to agree a new Brexit plan with the Labour leader before next Wednesday’s emergency meeting of EU heads of government, at which she intends to seek an extension to Britain’s current April 12 exit date.

If talks with Mr Corbyn fail, Mrs May would hold a “run-off” vote in the House of Commons between her thrice-rejected Brexit deal and other options, promising to honour the result — provided the Labour leader made the same commitment.

Mrs May risked enraging Eurosceptic Conservatives by rejecting the case for a no-deal Brexit in a televised address to the nation after the marathon cabinet meeting.

“This is a decisive moment in the story of these islands and it will require national unity to deliver the national interest,” said Mrs May.

“I have always been clear that we could make a success of no-deal in the long term but leaving with a deal is the best solution.”

While Labour backs a customs union with the EU and close ties with the bloc’s single market, Mrs May had previously insisted that Britain should forge its own trade policy and leave the single market. The Labour and Conservative parties are also at odds over a second EU referendum, which Mr Corbyn has ordered his MPs to vote for, but which Mrs May opposes.

If the prime minister is forced to embrace membership of a customs union or the EU single market, such a shift would split the Tory party.

“It is very disappointing the cabinet has decided to entrust the final handling of Brexit to Jeremy Corbyn and the Labour party,” said Boris Johnson, the Eurosceptic former foreign secretary.

Jacob Rees-Mogg, leader of the pro-Brexit European Research Group of Tory MPs, said: “What was announced . . . was an attempt to overturn Brexit in an attempt to do a deal with socialists. It’s very serious.”

Some business groups also expressed unease at Mrs May’s move. Adam Marshall, head of the British Chambers of Commerce, said: “The prime minister may have issued a revised road map, but business communities still have little sense of the destination. It’s like being asked to follow a satnav to an unknown location — with the nagging worry that the directions may yet lead to a cliff.”

But senior business executives who held a conference call with Greg Clark, business secretary, later in the evening were reported to be more sanguine.

“There were loads of grandees falling over themselves to compliment the prime minister,” said one industry figure.

The cabinet meeting had been fractious, with many Eurosceptic ministers opposing a long extension to Brexit. “I hope the deal holds,” said one pro-European minister.

Chancellor Philip Hammond was “shot down” according to one cabinet colleague after he suggested a second Brexit referendum or a general election might be needed to resolve the parliamentary deadlock over Mrs May’s deal.

Brandon Lewis, Conservative chairman, warned the cabinet that a snap election would be “catastrophic” for the Tories, according to one person at the meeting. He said Labour might win the poll. 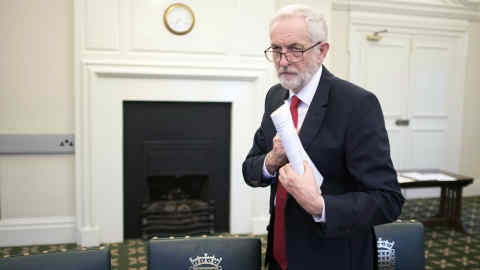 Mr Corbyn said he was “very happy” to meet the prime minister. “We recognise that she has made a move,” he added.

“I recognise my responsibility to represent the people that supported Labour in the last election and the people who didn’t support Labour but nevertheless want certainty and security for their own future.”

But another senior Labour MP said: “Why on earth should we trust them? It’s as late as it possibly could be. Why not do this when she went into minority government . . . Now, with minus-four days, she claims she wants to talk.”

The Democratic Unionist party, which props up Mrs May’s government, said the latest announcement was not a “surprise” given her “lamentable” handling of the Brexit negotiations.

In a statement, the party said: “It remains to be seen if subcontracting out the future of Brexit to Jeremy Corbyn, someone whom the Conservatives have demonised for four years, will end happily.”

Mrs May said that while the UK needed once again to delay the date of Brexit — which has already been postponed from March 29 to April 12 because of MPs’ rejection of her agreement — any extension needed to be “as short as possible and . . . ends when we pass a deal”.

Ministers said the extension could last up to a year — but could be cut short as soon as Britain ratified the withdrawal treaty.

Mrs May hopes to enact the legislation for Britain to leave the EU before the date of European elections scheduled for May 23.

However, Downing Street confirmed that Britain would make preparations for European elections, including incurring expenditure on them, by laying a parliamentary order on April 11. Mrs May’s spokesman said the poll could be cancelled at any date up until May 22.