Hedi Slimane staged his debut Celine men’s only show in a plastic box on the Place de la Concorde. That locale has cycled through a few changes of identity — rebranding, we might say today. It was originally Place Louis XV, envisaged during his reign in 1755. Then it became Place de la Révolution — it was where Louis XVI was executed. On Sunday, it was the site of revolution again.

Well, kind of. Many have painted Slimane’s Celine as a Terror, the tearing down of a fashion Bastille, the storming of its parapets. Yet in inaugurating Celine’s menswear line, no revolution was necessary — Slimane had absolute liberty. Not that he doesn’t take that with the women’s, but perception has been hampered by the hangover of the label’s last resurrection, under former creative head Phoebe Philo. But with menswear, he didn’t need to erase, simply assert.

Assert Slimane did. This collection followed the lines he established more than a decade ago in his final collections for Dior Homme — drawing from music subcultures and creating styles that both pay homage and, intriguingly, appeal enough to the protagonists that they wind up wearing a reflection of their own aesthetic. It’s very meta — most widely known when Slimane did a Pete Doherty collection that Doherty himself was papped sporting, in various states of distress.

Men like dressing like their idols — we know blokes zigged make-up across their faces like David Bowie and tucked ties into military shirts a la Bryan Ferry in the 1970s. What Slimane does, cleverly, is to commodify that. And give it integrity by knitting his work with that of the musicians he idolises.

That said, this wasn’t Slimane on autopilot — although mining the same creative source as his work for Dior Homme, and latterly Saint Laurent, his Celine output was distinct and different. Here’s how: through cut — importantly — and detail. Slimane’s Celine tailoring is wider and more forceful at the shoulder, his trousers squarer with a wide hem cropped well above heavy boots.

Speaking of cut, in a written missive issued after the show, Slimane cited a new haircut — “the Celine Classic Bowl Haircut” — which is, arguably, pushing even Slimane’s level of total creative control to an extreme. The hairstyle (and a few undercuts with wavy fringes that resembled Joanne and Susan from The Human League) made you think of 1980s issues of The Face — styles revived by the young musicians that Slimane finds inspiration in, and here reflected rather than invented.

But when Slimane talked about “rectangular volume”, the change was evident as his ragtag teenage models lurched around his catwalk at breakneck speed. Refreshingly, they were slim but didn’t seem as painfully skinny as they have in the past (maybe it was those bigger trews). It was also refreshing to hear Slimane discussing volume in clothes rather than volume of music, to feel his engagement with tailoring — wide coats, slouchier suits — at which he is superb.

In a season dominated by suits, here were ones that could be worn both by the young as badges of cool, and by men who don’t watch fashion shows but who want things that are quiet but perfect. In short, these felt like clothes with absolute relevance to generations of men — and not just Slimane’s rabid fan-base, who whooped and screamed and cheered and stamped their feet like they were at a rock concert when the attenuated figure of the designer shyly took a bow.

What remains to be seen is if that all-important, deep-pocketed man-on-the-rue will detour into the unfamiliar enclaves of a Celine boutique to see and shop for himself. In a weird way, I wonder if the feminine name of the house will put him off — we don’t like to consider toxic masculinity when thinking of fashion consumers, but name another men’s business operating with runaway success under a distinctly female moniker? You can’t just play to a mosh pit of fashion fanatics. But if this wide-ranging and (yes) democratic offering suggested anything, it was that Slimane has no intention of doing so. 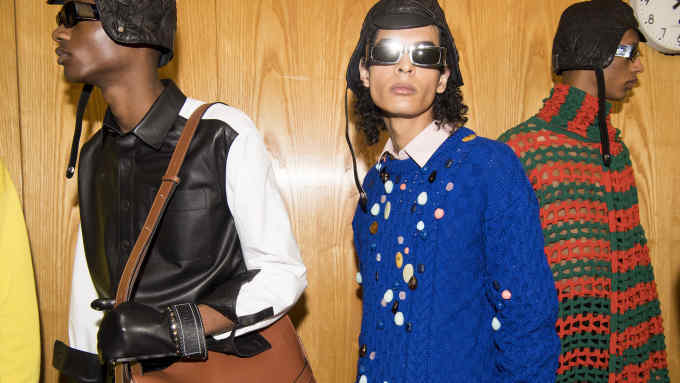