Mercedes-Benz parent Daimler on Thursday announced a major restructuring designed to better “tackle the rapid pace of change” as the car industry grapples with new competitors in the shift to shared, electric and self-driving vehicles.

The Stuttgart-based group said it would split up Mercedes-Benz cars from Daimler Trucks and its financial arm — now to be called Daimler Mobility — and then place the three divisions under the umbrella of Daimler AG.

The hope is to give all three divisions greater entrepreneurial freedom, position them even closer to their markets and customers [and empower] them to enter partnerships more easily and quickly.

“The new structure positions Daimler to tackle the rapid pace of change in the mobility sector and the corresponding strategic challenges,” said Manfred Bischoff, chairman of the supervisory board, which approved the new structure. “Legally independent divisions will sharpen our focus on the future success of the business.”

A wide range of well-established German groups are coming under pressure to be more nimble and offer investors the opportunity to invest in “pure play” companies rather than conglomerate structures.

Siemens has been the most prominent, spinning off its renewable energy, healthcare and rail units into separately listed companies in what chief executive Joe Kaeser calls “a fleet of speedboats” model rather than an oil-tanker conglomerate.

ThyssenKrupp, meanwhile, lost both its CEO and chairman this month in a battle with activist investors who are pushing for efficiencies.

Earlier on Thursday, parts supplier Continental received the green light from its supervisory board to split off its power-train division from its automotive and rubber divisions.

Daimler’s revamp, which the group flagged in October, will be voted on by shareholders in May 2019 and, it hopes, come into being in January 2020.

The move was confirmed just hours after Daimler posted its lowest second-quarter earnings in at least five years, causing chief executive Dieter Zetsche to complain: “The automotive industry, and therefore we too, have many challenges to overcome.” 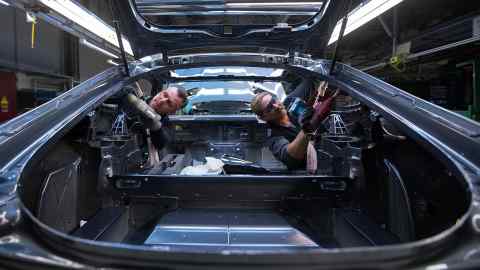 Daimler had issued a profit warning a month earlier, blaming so many factors that JPMorgan analysts said they were “kitchen sinking guidance”. Among the culprits were an escalating trade war, a diesel recall and costs needed for new emissions standards.

Christian Ludwig, analyst at Bankhaus Lampe, said second-quarter earnings of €2.6bn were 17 per cent below his estimates. Despite the shortfall, he expects only a slight decline from the record results last year and said “the relief of tensions in the tariffs discussions between the USA and the EU should help”.

Bodo Uebber, finance chief at Daimler, said the one-time cost of implementing the new structure would be close to €1bn.

“We examined the pros and cons of the new structure very closely and reached the conclusion that the advantages clearly prevail,” he added. “We will sharpen our focus, increase entrepreneurial responsibility and protect our synergies and economies of scale.”