The world is on the road to “hyperinflation” and could be heading towards its worst financial crisis since the second world war, according to Elliott Management, one of the world’s biggest and most influential hedge funds.

The Florida-based firm, which was founded by billionaire Paul Singer and manages about $56bn in assets, has warned its clients of an “extremely challenging” situation for the global economy and for financial markets where investors will find it difficult to make money.

An “extraordinary” set of financial extremes that come as the era of cheap money draws to a close “[has] made possible a set of outcomes that would be at or beyond the boundaries of the entire post-WWII period”, it wrote in the letter, which was seen by the Financial Times.

“Investors should not assume they have ‘seen everything’” just because they have experienced financial crises such as the 1970s bear market and oil price shock, the 1987 market crash, the dotcom bust or the 2008 financial crisis, it added.

The group’s warning comes during a dismal year for markets, in which global equities have shed $28tn in value, according to Bloomberg data, and bonds have also tumbled, leaving investors with few places to seek shelter.

The fund manager laid much of the blame for the looming crisis on central bank policymakers, which it said had been “dishonest” about the causes of high inflation by blaming it on supply chain bottlenecks in the wake of the pandemic, rather than on ultra-loose monetary policy put in place at the height of the coronavirus crisis in 2020.

The world is “on the path to hyperinflation”, it said, which could lead to “global societal collapse and civil or international strife”. While such an outcome is not certain, this is currently the direction that the world was headed, it added.

Its warnings come as investors try to assess the economic damage likely to be felt from a rapid series of large interest rate increases in the US and elsewhere, as central bankers race to try to curb soaring inflation.

The S&P has dropped 20 per cent since its peak at the start of this year, while the Nasdaq is down by one-third since its high a year ago.

However, Elliott said markets had not fallen far enough, given the many risks present, and warned of a further reversal of the so-called “everything rally” seen near the top of the bull market of recent years, as sky-high investor exuberance lifted all manner of risky assets.

There are so many “frightening and seriously negative possibilities” that it is hard not to think that “a seriously adverse unwind of the everything bubble” is coming, it said.

The hedge fund estimates a 50 per cent fall from peak to trough would be “normal”, suggesting further large falls to come in major equity markets, although it added it was impossible to know whether or when that would happen.

Martin Wolf
Geopolitics is the biggest threat to globalisation 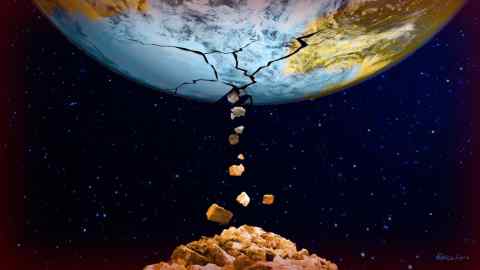 Elliott, which is up 6.4 per cent in 2022 and which has only lost money in two calendar years since launch in 1977, pointed to a handful of areas of potential stress that could accelerate market falls. It highlighted banks’ losses on bridge financing, potential markdowns of collateralised loan obligations and leveraged private equity as areas of potential risk for markets.

The firm was also critical of investors who believed market falls will always prove shortlived and can be “ignored”.

The idea that “‘we will not panic because we have seen this before’ does not comport with the current facts”, it said.