Shaun Leane: All That Glitters proves TV gold for the industry

Shaun Leane describes his eponymous brand as “the untold secret”, known mainly to those in the fashion, film, arts and jewellery industries. But, thanks to his recent stint on primetime UK television, word of the jeweller is reaching the public. “People who walk past our concessions in Selfridges and Liberty, now they’re stopping — going, ‘Oh, this is the guy on All That Glitters’,” he says.

The increased footfall has translated into sales, although in-store growth has not been as significant as the digital surge on the back of the BBC talent show for jewellers. Online purchases were up 100 per cent in May, year on year. This experience suggests the show might have achieved what Leane had hoped for when he signed up to be a judge, alongside fellow British designer Solange Azagury-Partridge: to bring jewellery to the forefront of the public’s mind, benefiting an industry that needs to continue to attract designer-makers.

“What I was hoping from this programme was it would bring to a national audience the craftsmanship, the skillsmanship, the detailing, the intricacy, the dedication and concentration that is needed to make a piece of jewellery,” he says. He felt this public appreciation of the craft would feed into the industry by creating “a value relation to jewellery”.

The six-part series — full title All That Glitters: Britain’s Next Jewellery Star — aired in April and May, attracting an average of 2.3m viewers per episode. Hosted by comedian Katherine Ryan, it had a similar format to reality TV hits such as The Great British Bake Off and The Great British Sewing Bee. Each week, contestants completed bestseller and bespoke challenges, making a piece to appeal to the mass market and one to a client’s brief, respectively.

The winner was 24-year-old diamond mounter Hugo Johnson, who works for RTFJ near Haywards Heath, East Sussex, which specialises in handmade bespoke pieces. After meeting a mounter at his taekwondo class as a teenager, Johnson did work experience with him and was attracted to the trade by the “endless possibilities” of metalwork. He completed a foundation course at the Goldsmiths’ Centre, a UK charity for the training of goldsmiths, and a five-year apprenticeship.

“He reminded me of myself,” says Leane, who is also classically trained, having completed a seven-year apprenticeship in Hatton Garden, London’s jewellery quarter. “He had the skill and he was passionate and dedicated, and ready and willing to learn, which is the most important thing.”

Johnson says his work has not changed since the show, but the response to it has. “A lot of people within this trade are so talented, but they don’t get their work necessarily recognised,” he says. “I feel so grateful to have had my work exposed on a platform like this.” He has had to close his order book for the next eight months and has put customers on a waiting list.

But Johnson, who is developing his own collection of bangles, lockets, pendants, earrings and objets d’art, believes everyone in the industry is benefiting from the programme. “It’s really shone a beautiful light on where jewellery actually comes from,” he says.

Leane agrees. He says the traditional sector can be slow to adapt to change and was initially “quite rigid about jewellery being used for a TV competition”. But, then, it saw the benefit of people being educated about jewellery. “What the industry can learn from this programme is that jewellery making is a beautiful skill . . . and it should be shared through all media channels to grow and save our industry,” Leane says.

He points out that, 15 years ago, while designer-makers were coming through university courses, the number of apprenticeships for traditional goldsmithing was on “a really strong decline”. Today, there are many schemes. “It’s coming back now, thanks to programmes like All That Glitters and YouTube and social media because it’s made it more open,” he says.

Jewellery was not presented to Leane as a career option at school, but he thinks the show will encourage young people to enter the industry. He already knows of new recruits: two of his godchildren, aged five and eight, tuned in every Tuesday — and now talk about nothing else. “Their mums are like, ‘You’re going to have to take them on as apprentices’,” he says.

The show was made at Birmingham City University’s School of Jewellery, which reported an increase in visitors to its website during the broadcast run. Social media engagement also grew, with some jewellery accounts increasing follower numbers by more than 50 per cent.

Similarly, the Goldsmiths’ Centre recorded an 80 per cent increase in page views, year on year, for the Goldsmiths’ Company Apprenticeship Scheme between the first show airing on April 13 and June 1. And page views for the centre’s foundation programme for 16- to 19-year-olds more than doubled over the same period.

Leane says that, just as MasterChef, another TV reality show, contributed to cooking becoming “part of our culture again, so hopefully will jewellery become the beating heart of the [design] industry in the UK again”. Production on a second series of All That Glitters is due to begin soon. 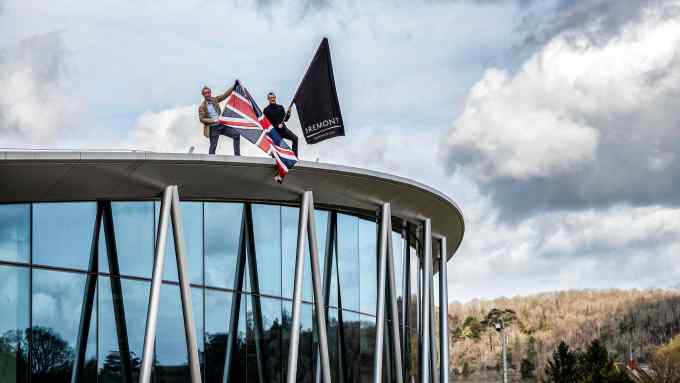