Sign up to myFT Daily Digest to be the first to know about UK manufacturing news.

UK car manufacturing in the first half of this year fell to the lowest level since rationing ended, with output falling 42 per cent to 381,000 vehicles, the worst six months since 1954.

The drop, caused by an industry-wide shutdown during March and April and weak customer demand since then, puts Britain on track to make 880,000 vehicles this year, figures from the Society of Motor Manufacturers and Traders released on Thursday show.

Aside from 2009, when the country was in the immediate aftermath of the financial crash, UK car output has not fallen below the 1m level since the 1980s. Even in January, before the pandemic hit, the industry was forecast to turn out 1.25m vehicles.

“There isn’t too much to be celebrating in these numbers,” said SMMT chief executive Mike Hawes.

The pandemic caps a perfect storm for Britain’s car industry, which has been facing falling investment levels and uncertainty since the 2016 vote to leave the EU.

Before the Brexit poll, the UK was on course to make 2m vehicles a year, a record high, by this year.

Now the best-case scenario plotted by the SMMT, which includes a full trade deal with the EU from January or soon after, will see UK plants produce about 1.2m vehicles a year by the middle of the decade.

“[The car industry’s] long-term future now depends on securing a good deal and a long-term strategy that supports an industry on which so many thousands of jobs across the country depend,” Mr Hawes said.

“We don’t want bailouts, we just want to be competitive.”

More than 11,000 jobs have been shed across the industry this year, from carmakers such as McLaren and Aston Martin to dealerships such as Lookers, according to SMMT calculations.

Far more jobs are expected to be lost, particularly across dealer groups, as the government’s furlough scheme unwinds in October. September will be a key sales month for the sector, which would show the true level of underlying car demand in the economy, said Mr Hawes, who warned that more pain was coming.

“The real contraction of the economy is expected to happen in the fourth quarter,” he said. 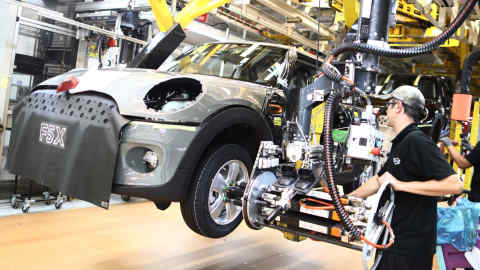 Despite the downturn, the industry has held off calling for government sales incentives, which have helped to sustain sales in France and Germany.

Mr Hawes warned that consumer confusion about the prospect of a government incentive scheme had led people to delay car purchases, compounding the demand problem for manufacturers. “The last thing we want is consumer hold-off,” he added.

The SMMT has devised an incentive scheme for use by the end of the year, once the true scale of the economic impact is clearer. This would aim to drive sales as well as protecting UK plants, which tend to make more expensive cars.

He said a 2009 government scrappage scheme drove sales of small cars made outside the UK.

“We would prefer something that benefits the entire market, but we want to see the natural level of demand first. You can only do it once, and it has to be at the right time.”

Get alerts on UK manufacturing when a new story is published