The actress loves teapots, Enstrom toffee and her boots by SJP

My personal style signifier is bold silver jewellery – usually Native American, Indian or Moroccan – especially a collar necklace that I never take off. I sleep in it and it makes me feel armoured and powerful. I also always wear a single flower on a chain that I bought in New Mexico – it’s by James Faks, who is affiliated to the Blackfeet and Oneida Nations – and a star that was my SATC character Miranda’s back in the day. They just make me feel great.

The last thing I bought and loved was an enormous teacup that says “Queer” that I found at Fishs Eddy in New York.

The best souvenirs I’ve brought home are colourful rugs I bought while filming in Morocco. We have them scattered throughout our house in Montauk. Because we have so much sunlight, they have faded over time, but I love that they aren’t heavy or ornate.

The best book I’ve read in the past year is Smile: The Story of a Face by playwright Sarah Ruhl. She developed Bell’s palsy after the birth of her twins, which impaired her ability to smile or show emotion. Her story is intimate and revealing about what it is to smile and what it means when you can’t. I am her friend and didn’t know the details, and her personal story touched me deeply.

A recent “find” is the restaurant Hwa Yuan in Chinatown. The Peking duck, cold sesame noodles and other Szechuan dishes are on another level.

The podcast I’m listening to is Little Known Facts with Ilana Levine. She’s an actress who interviews all kinds of artists and celebrities and she’s like Barbara Walters in the way that she puts them at ease. For SATC fans of the character Stanford Blatch, I highly recommend the two-part episode she did with Willie Garson, who played him. I’ve also been listening to Sounds Like Hate, which is a revealing examination of white supremacy.

An indulgence I would never forgo is toffee. I give boxes as gifts and people make it for me as well. My freezer is filled with homemade toffee, but I also love Enstrom’s almond version, which is made in Colorado. From $26.75 for 454g

My style icon is the actress and producer Christine Baranski. We’ve been friends forever and she is endlessly chic; her hair, her sense of style, the way she lives her life. There is no better comedic actress – or kind person – and she is a role model. It was a joy to work with her again on The Gilded Age.

I’ve recently rediscovered an old VHS tape of Howards End with Helena Bonham Carter and Emma Thompson that I watched with a close eye. It’s still every bit as wonderful as when it was released.

The best gift I’ve received recently is a pair of fur-lined, low-heeled taupe boots from Sarah Jessica Parker’s line. She gave them to me when we wrapped And Just Like That... and they are so comfortable that I just love them.

I have a collection of teapots from all over the world, some of which I inherited from my mother and grandmother. I drink tea all day, every day and typically have three pots going at once. I have glass ones, metal versions, seashell-shaped pots, Russian and Japanese pots, and a Chinese one that my son brought back from his time studying abroad.

The gadget I couldn’t do without is a pineapple slicer-corer from Williams-Sonoma. It removes the tough core from the pineapple, making it easier to cut into chunks. I directed a play in 2014, and the cast and crew were so accustomed to my pineapple that everyone got one of these corers as an opening-night gift. $24.95 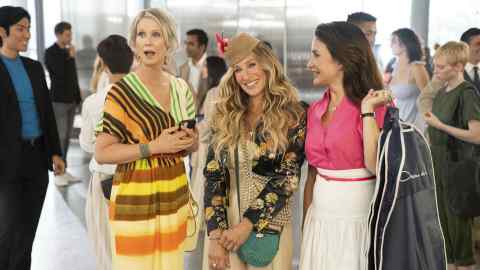 The best bit of advice I ever received was not given directly to me, but I love the sentiment. Laurence Olivier was once asked by a young actor what was the most important piece of advice he could share, and he replied: “How to become an old actor.” In other words, why are you in this and what will sustain you? You don’t start to get good for 30 years…

The last item of clothing I added to my wardrobe was a thigh-length black raincoat with bell sleeves from Sweaty Betty. It’s stylish and practical. $198

An object I would never part with is a corner cupboard that my mother bought for my grandmother. After we bought our house in Montauk, I finally had a place for it and it’s full of dishes, teapots and all kinds of ceramics.

The one artist whose work I would collect if I could is Kara Walker. Our kids went to school together and I bought one of her works at the school auction. I’d love to have more. I’d also like to own some Lucian Freud paintings. They’re not necessarily flattering, but I find his work beautiful, grotesque and psychologically penetrating.

The place I can’t wait to go back to is Nantucket, off the coast of Massachusetts. I haven’t been in many, many years, but I remember the landscape, the light and the charm of a New England town.

My favourite room in my house is my kitchen in New York. It’s the central hub for family and we all sit around a central island with me at the head, so I feel like Captain Kirk. I like to sit here and read, putter, drink tea and pay bills – it’s warm and feels like the control station of the home.

My beauty and wellbeing gurus are Rebekah Forecast, who has been cutting my hair since 2000, and Matin Maulawizada, who does my make-up and is very much about healthy products. Alicia Lombardini is my stylist – I need a lot of help in this department – and we really listen to each other after so many years. 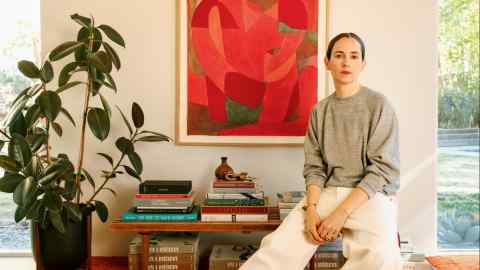 My favourite app is The New York Times Spelling Bee. I’m obsessed. The idea is to make as many words as you can using seven letters, and it changes daily. It’s a constant that I check in with every morning.

If I weren’t doing what I do, I would be a director, which isn’t so far from what I am doing now, but I love to be involved with TV, film and theatre and directing is a great way to do that. I’d love to be a writer, but it’s too solitary as I’m a very social person and love connecting with people. Being a therapist interests me too.

The Gilded Age is available on Sky Atlantic and NOW TV