It is February, a few days or so after WeWork’s valuation has jumped to $15bn, and Adam Neumann, chief executive of the office space start-up, is fussing over what kind of tea to serve me. “Not the lime one,” he says to an assistant in WeWork’s new headquarters in Manhattan’s Chelsea district. “It had a triangular bag. You know, the really yummy one you made.”

Near his office, WeWork employees buzz through a food hall, sipping lemon water and eating organic snacks. Ellie Goulding plays in the background.

Neumann, a 6ft 5in former Israeli navy captain, co-founded WeWork with Miguel McKelvey in 2010 to transform normal offices into what he describes as “the future of work”.

WeWork says it has 50,000 “members” — or customers — spanning 78 locations in 23 cities in the US, Europe and Israel. It expects the number of members to more than double by the end of the year.

At its core WeWork is a property company, but has branded itself as a sharing economy start-up, attracting investors — such as Goldman Sachs and JPMorgan — that have pumped nearly $800m into the enterprise in the past year and a half. Fidelity Investments raised its valuation of its $190m in WeWork shares by a half in December, boosting the six-year-old company’s valuation to $15bn, higher than those, for example, of Elon Musk’s rocket enterprise SpaceX and web and mobile application company Pinterest.

This implies that WeWork’s office space of some 5m sq ft in total is worth $3,000 per square foot, more than even the highest-class towers in New York, such as the GM building, which commands $2,400 per square foot.

WeWork’s business model was born out of the financial crisis. In 2007 Neumann owned a baby clothing company that he describes as “not a great success”. He ran the business from a building in Brooklyn, where he noticed chunks of empty space and convinced his landlord to let him sublet cubicles on the classified advertisement website Craigslist for extra cash. This morphed into Green Desk, a sustainably-focused co-working space company, which he founded with McKelvey, an architect who also worked in the building.

A few years later, with the US unemployment rate still hovering around 9 per cent, WeWork was born. In a shaky jobs market, more workers were freelancing or working from home. An opportunity was spotted to draw the post-recession labour force into offices with exposed brick walls and happy hours, an alternative to drab cubicles or Starbucks couches.

In the wake of the recession, freelancing is no longer niche. A third of US workers are now freelancers, according to research by software company Intuit, and this is expected to grow to more than 40 per cent by 2020. Neumann sees the so-called gig economy as a permanent shift in the nature of work.

“An entire generation saw this downturn” and noticed “that the old rules are broken”, he says. “The sharing economy is around in so many different aspects of their lives. Kids today, they don’t need to buy a car, they can drive around in Uber. They don’t have to buy an office, we can rent an office for them.”

WeWork now has 26 locations in New York City, where it has leased more than 700,000 sq ft of property in central Manhattan, according to Downtown Alliance, a Manhattan research company. Neumann, who grew up on a kibbutz, practices the Jewish mystical tradition of Kabbalah, and combines his beliefs with the shrewd deal making that has been so successful on the New York property market. When asked about competition, he says “happiness comes from within”. On the subject of the economic slowdown in China, he says companies should seek “social value” rather than pursue growth.

Some in the property industry are mystified by WeWork’s rise, given a comparison between the more traditional high-end office market in New York City and the assets WeWork deals in. “It’s hard to quite understand,” says a New York real estate lawyer. “These buildings don’t have great air conditioning or good light. The windows leak. It’s quirky and for some reason quirky has become not only a plus, but a requirement.”

Neumann says that beyond the aesthetic, WeWork connects companies with each other, cultivating a “physical social network”. Members post jobs and events on the company app and WeWork offices hold start-up pitch nights.

“The pitch seems to be: come work here and you’ll be with all these really good-looking young people that will help you do deals,” says John Lutzius, a managing director at real estate investment researchers Green Street Advisors.

I promise you that whatever landlords are willing to give us today, they will give us a lot more

WeWork is betting that its model will find success in more and more high-tech cities globally. The company has big plans for Europe, where it has already opened locations in London in the past year. Berlin and Paris are on its horizon.

Neumann says London will soon compete with New York as a prime WeWork hub, with 14 locations expected by the end of the year. “We know New York is our biggest city now. We don’t know that London is not our biggest city two years down the road,” he says.

WeWork’s London Moorgate location, with more than 150,000 sq ft, is now one of the largest co-working spaces in the UK, added to which, says Neumann, a fan of north African and Middle Eastern cooking, it is the kind of cosmopolitan area where you can get a “really awesome shakshuka”.

WeWork has also expanded its customer base beyond small start-ups, to large companies including American Express, GE and Blablacar. It is moving into the residential market with WeLive and its community-oriented “co-living” apartments. The first WeLive apartment complex opened in New York this year.

The world has changed dramatically since WeWork first opened its doors. Although a fresh round of market turmoil and the crash in the oil price has raised the spectre of another global recession, property prices have recovered from the effects of 2008 and in many cities exceeded the subprime peak level. Hence it is not easy to find the more affordable older buildings that WeWork leased in its early days.

WeWork has combated rising rents by securing preferential lease terms from landlords as an anchor tenant in buildings that it occupies. Adding WeWork to a building brings “above market energy incentives”, says Neumann, which is to say its presence attracts other tenants to the location. 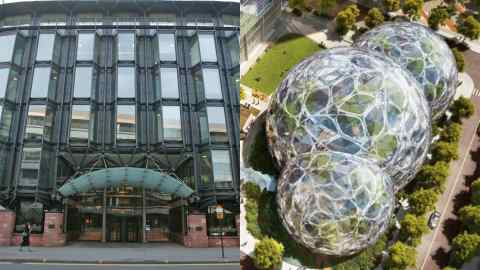 Even so, WeWork’s structure is intrinsically risky. It takes out long leases of at least 10 years, but its own customers are on monthly contracts. Regus, its main rival in office space rentals, grew rapidly during the last dotcom boom, but filed for Chapter 11 bankruptcy in 2003 after the bubble popped and its tech clients pulled out.

Neumann admits that some of WeWork’s customers “will have issues” if the economy sours, but adds that property prices are likely to fall in a downturn, which cuts WeWork’s costs: “I promise you that whatever landlords are willing to give us today, they will give us a lot more.” He says he has already seen lease prices dive in the past six months, as the Federal Reserve raised interest rates and stock markets faltered.

Some market observers have questioned whether WeWork’s rapid rise is another sign of a tech bubble brewing around hyped young companies with soaring valuations. Internal documents obtained by The Information, a news site, showed WeWork had $4m in profits on $75m in sales in 2014. WeWork projected profits to grow to more than $900m on sales of $3bn by 2018, the documents showed.

Despite these lofty expectations, Neumann says he does not take uncalculated risks. The company does its research, he insists. “We know the demand is there.”

Get alerts on Adam Neumann when a new story is published